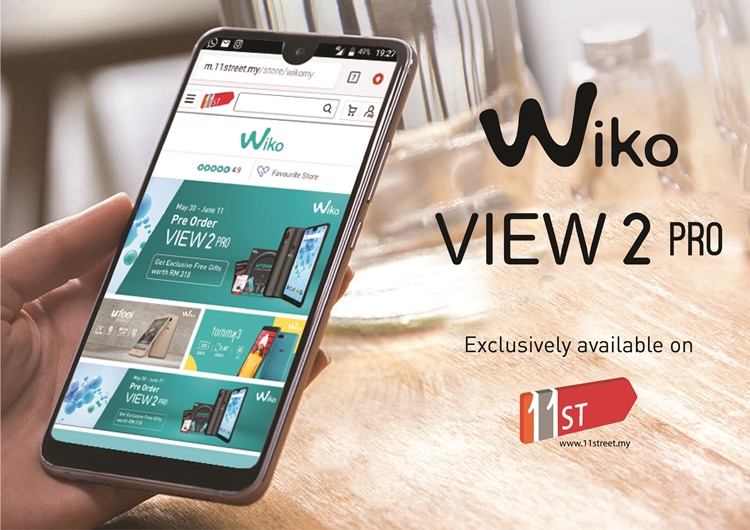 Today, 11street has announced a new partnership with Wiko, a French mobile company that has been around in Malaysia for quite some time. They came to Malaysia just two years ago and well known for their reputation for selling quality budget phones. So to celebrate the occasion, customers can pre-order the newly launched Wiko View2 Pro starting today until 11 June 2018 for just RM999.

Besides the RM999 value, those who pre-order at 11street will also receive a gift box worth RM318, which contains a WiShake (Wiko headphone), a 15000mAh power bank and an OTG pen drive. Available in Gold and Black (or Anthracite), the design has a very tiny notch for the 16MP front camera and the back carries a dual rear camera setup of 16MP each. These are pretty big sensors, as the processor is an entry-level Qualcomm Snapdragon 450 processor clocking in at 1.8GHz with 4GB of RAM.

Below is the official specification set for the View2 Pro

First debut in late February 2018, the 19:9 aspect ratio phone features a Big Pixel Technology and big aperture of f/1.75, allowing users to take photos in low light environments. According to Wiko, the enables the image to be enhanced with 4x the photosensitivity for brighter quality. Besides that, it runs on pure stock Android and you can pay with your smartphone via NFC.

If you like to get one, you can visit www.11street.my today to pre-order it for RM999 + freebies. Stay tuned for more 11street and Wiko news at TechNave.com.