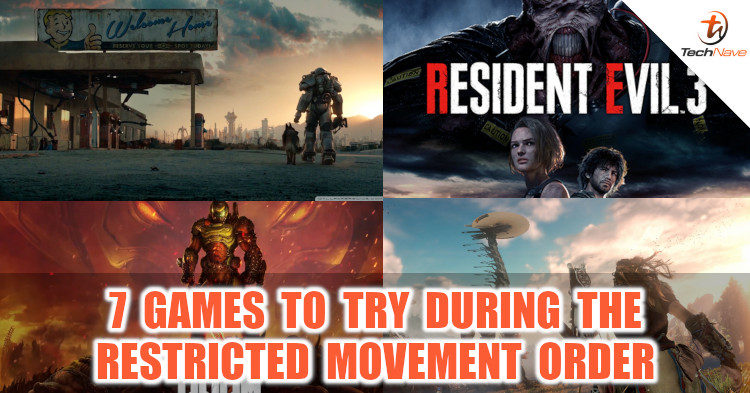 With the restricted movement order in full effect until 31 March 2020, we don’t really have much reason to go out due to the fact that we could end up getting infected with the virus and well… most of the shops are closed anyway. With that said, you might find yourself bored out of your mind mostly because there is really not much to do at home.

Fortunately for you, I’ve come up with a list of 9 post-apocalyptic RPG and shooter games for the PC that you could kill time with until the end of the month.  Let’s take a closer look at the list, shall we?

Fallout is a post-apocalyptic role-playing game that is set around the 22nd century, where the United States of America is riddled with nuclear fallout due to the great war. The war resulted in most of the land becoming uninhabitable due to the radiation, causing many to perish or mutate into unsightly creatures.

In Fallout 4, you play as one of the characters who survived the great war by taking refuge in one of the many vaults found in the Fallout universe. Unfortunately, while in the vault, a couple of men appeared out of nowhere and kidnapped your son, as well as murdered your wife. With that said, you set out on your quest to find your son and avenge your wife’s death.

Next on the list, Horizon Zero Dawn takes place in a post-apocalyptic world where machines of unknown origin rule the lands. You play as a female protagonist called Aloy, a curious character who unknowingly stumbles upon an ancient piece of technology which reveals the truth about the ancient civilization.

In this game, you traverse the land fighting huge animal-like machines as well as finding clues on why these machines started appearing and more. Furthermore, the game also has several mesmerizing landscapes where you can easily lose yourself in.

World War Z is a third-person co-op survival shooter where you fight your way through hordes of Zombies as you complete objectives in order to escape. Killing zombies are much more enjoyable when you do it with friends, which is why the game allows you to play with up to three of your friends in a single session.

The developers have previously mentioned that the game supports up to 1000 enemies on the screen at the same time, and they can also climb on each other in order to get to the player. To put it simply, World War Z is basically Left 4 Dead on steroids.

Similar to World War Z, The Division 2 is another third-person co-op shooter you can play with up to three of your friends. However, instead of fighting zombies, you’re tasked with taking back Washington D.C. from gangs of Marauders.

Due to the fact that this is also an RPG game, you’ll get the usual stuff such as character and skill progression as well as armour and weapon customization to fit your playstyle. Furthermore, there’s also a player versus player area called the Dark Zone that’s not only filled with rare loot but it also acts as an area where you can fight against other players.

If you prefer something scarier, you can try out the Resident Evil: Raccoon City demo on Steam. The game is a re-imagining of the original Resident Evil 3 game, which was originally released for the Sony Playstation in 1999.

Similar to the game it was based on, the story follows a character called Jill Valentine as she tries to escape the city that is infected by a bio-weapon. If you like the demo, you might want to consider getting the full game which is expected to be available on the PS4, Xbox One, and PC from 3 April 2020 onwards.

DOOM Eternal, which was just released not too long ago, is a gruesome first-person shooter game where you fight off Hell’s army that had invaded the Earth. While it is only a singleplayer game, it features many explosive moments in the campaign that are too fun to pass on.

There is also a 2 versus 1 multiplayer mode where you win by eliminating the opposing team in a best of 5 round match. However, if you’re prone to epilepsy, I recommend getting another game instead.

Gears 5 is a rather interesting game because not only does it come with a full-fledged multiplayer-supported campaign, but it also comes with several multiplayer modes including Escape, Versus, Horde, as well as a map builder for you to create your own challenges. With that said, you could potentially sink several hours into the game with up to four of your buddies as you create maps and complete challenges.

With all that said, which of the games listed above would you be interested in playing during the Restricted Movement Order? Did we miss anything? Let us know on our Facebook page and for more updates like this, stay tuned to TechNave.com.