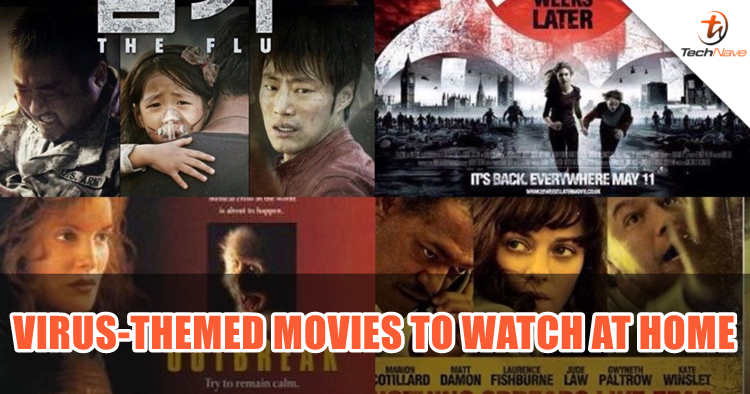 Feeling bored at home? We know. Since the Movement Restriction Order began, some Malaysians are still going out because they can't stand it. But if you're a movie buff, now this is a pretty great opportunity to watch some movies. So in accordance to the theme of this period, we decided to introduce you to some movies to watch in the theme of "virus".

Just so you know, we aren't going to include a lot of Zombie flicks here because they are Zombies to begin with. Also, if the movie doesn't offer any clear explanation of the cause (again, every Zombie movie ever) or some silly horror B-grade sci-fi movie (which is an old movie called Virus), then it won't be counted as well. So without further ado, here are 7 virus-themed movies you should watch in no particular order.

Starting off the list is a pandemic movie from South Korea, this movie actually appeared in the search engine again since the rise of COVID-19. Why is this? Perhaps it's because the movie's situation is eerily similar to our current phase such as how fast the infection spreads. Of course, Flu is much more dramatic and we can be thankful that Malaysia is not in that state of chaos.

As you expect, Contagion is definitely in here and there are a lot of well-known stars in this one - Matt Damon, Gwyneth Paltrow, Jude Law, Laurence Fishburne, and Marion Cotillard - and it's a movie of how fast the virus can be transmitted through the air and mutating at the same time. Like Flu, the movie also showcases the dangers of uncontrollable panic situations, false information and bureaucratic delays to the virus.

Ah yes, the sequel to the first popular 28 Days Later for introducing fast "Zombies". I know we said no Zombie movies are allowed but in this case, these things are more like infected people. 28 Weeks Later shows us how a city in total lockdown would look like, which is London, then of course, chaos ensues when one of the characters makes a STUPID move causing the infection once again. Sigh, I just hate characters making stupid decisions.

Another one from South Korea that's not marketed internationally, Deranged is a story about a fictional parasite worm (or is it?) infecting a human host, making him or her eat a lot then eventually, the need to drink a lot of water. That's not the terrifying part though, eventually, the parasite worm will "control" the human host to dive into the nearest water spot and drown themselves. Yikes.

Outbreak is a classic from the '90s starring Dustin Hoffman and Morgan Freeman. It tells the story of a US soldier attempting to curb an outbreak of a small town which was started by an imported wild monkey, which is exactly how it started in the real world with exotic animals. Anyway, the movie focuses on how much the government and military are willing to do to control an outbreak.

There are plenty of horror movies centred around a bunch of teens staying at a cabin and dying afterwards. But Cabin Fever took it to another level, the characters didn't get killed by a serial mask killer or a monster, but a flesh-eating virus. Compared with the other movies in this list, Cabin Fever is on a smaller scale with at least 3 locations and explores the primal fear of losing (and infecting) your loved ones. This movie is one heck of a psychological thrill ride and not everyone may able to sit down and watch it till the end, thanks to the practical effects of their skins peeling off.

Another classic film starring Bruce Willis, Madeleine Stowe and the young Brad Pitt, 12 Monkeys almost didn't make it to the list because we felt the movie was more on the sci-fi genre. But anyway, Bruce Willis plays as James Cole who was sent back to the past in an effort to trace back a deadly virus which brought the humans to the brink of extinction. By the way, if you feel this film is too "old" for your viewing, you can always check out the 12 Monkeys TV series with a total of 4 seasons (47 episodes). It's the perfect timing for you to binge watch everything during this Movement Restriction Order period.

Honestly, I'm glad Malaysia or any country in the world aren't experiencing such a situation like in these movies but still, it doesn't mean that we can be complacent about it. Did we miss out any virus-themed related movies? Which one of these have you watched before? Let us know in the comments on our Facebook page and stay tuned for more entertainment news at TechNave.com.