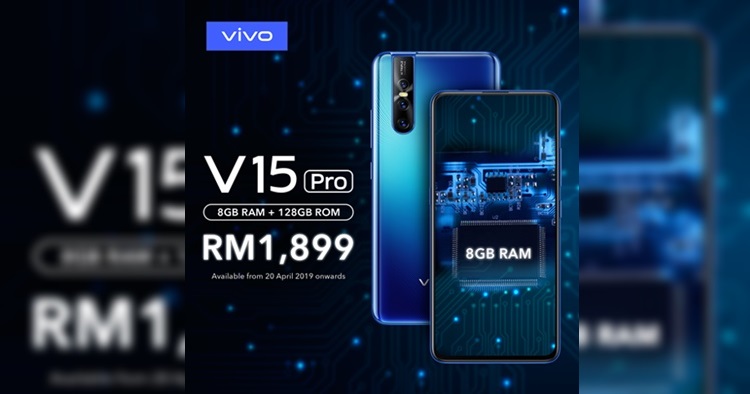 The vivo V15 Pro has been already around in Malaysia for a few weeks now, but for those who are waiting for the bigger variant, it's finally unveiled. For the recommended retail price of RM1899, it comes with 8GB of RAM and 128GB ROM.

In case you missed it, the V15 Pro 8GB variant actually made a public appearance last week in conjunction with the Player Unknown’s Battlegrounds (PUBG) Mobile National Championships (PMNC) 2019. Besides the memory capacity upgrade, there are differences in terms of tech specs. The V15 Pro features a Qualcomm Snapdragon 675 chipset, 3700mAh battery, a bigger 48MP + 8MP + 5MP triple rear camera, a 6.53-inch AMOLED Ultra FullView Display, as well as a new Competition Mode and Dual-Turbo that allocates memory usage for gaming performance and reducing frame-drop by 300% respectively.

The V15 Pro 8GB variant will be released on 20 April 2019 and you probably can get it online and authorized dealers near you. Stay tuned for more vivo news at TechNave.com.