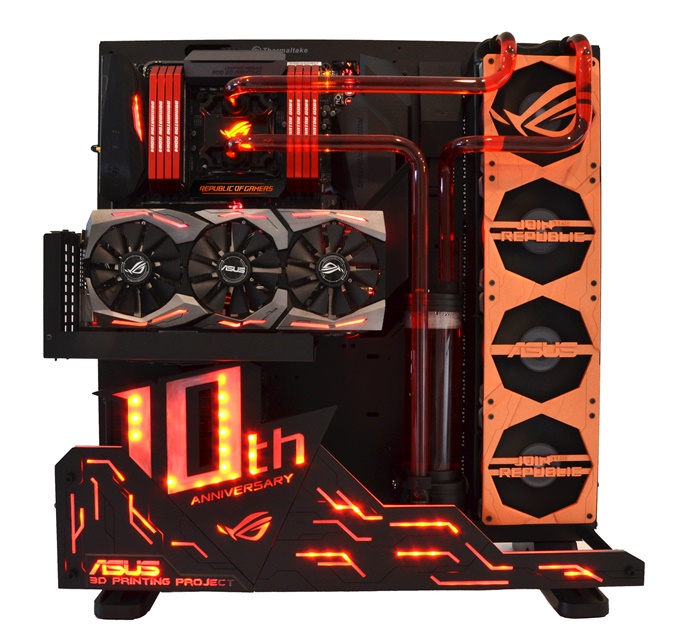 The stunning ROG 3DMod PC build showcases the possibilities of the latest ASUS Aura RGB lighting technology and creative 3D-printed accessories, which give gamers new and exciting customization options. It features a water-cooled design and nine programmable lighting effects that can be synchronized across its ROG Rampage V Edition 10 motherboard, ROG Strix GTX 1080 graphics card and attached RGB strips. There are 3D-printed fan shrouds protecting the water-cooling radiator and graphics cards without compromising airflow or performance, and a motherboard cover for neat cable management.

The ROG Claymore mechanical gaming keyboard gets 3D-printed protective covers for the side panels, a dust cover for the numeric keypad, signature ROG keycaps and a ROG keycap puller. 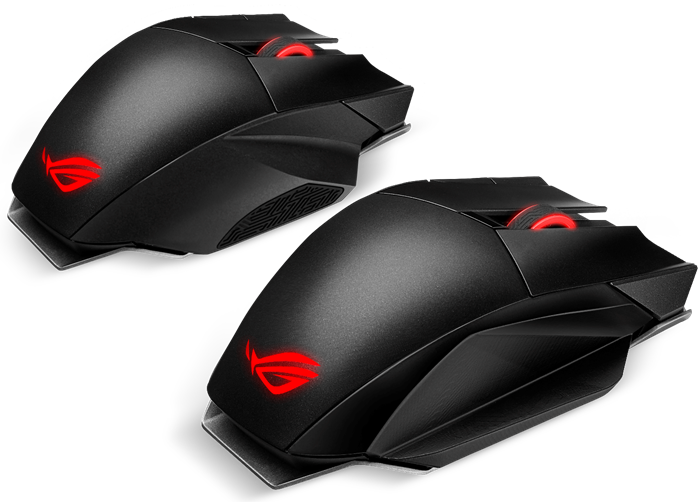 For a more tailored grip, the ROG Spatha wired/wireless gaming mouse on display comes with a 3D-printed right-side-panel. This new modular panel has a narrow design that is suited for gamers with a fingertip-style grip. The original panel, designed for a wider grip, offers a ring-finger rest. The XG Station 2 is an external graphics-card dock that turns a Thunderbolt 3-enabled laptop into a VR-gaming powerhouse by increasing its graphics performance by more than ten times. An internal 600W 80PLUS Gold power supply supports the latest NVIDIA GeForce GTX and AMD Radeon graphics cards. The Aura RGB lighting can be synchronized with compatible ROG Strix graphics cards so gamers can express their personal style. It's also easy to connect and can be unplugged without restarting the laptop, and it includes four USB 3.0 ports and a gigabit LAN socket for extended connectivity and convenience. The huge 24.5-inch gaming monitor features a Full HD (1920 by 1080) panel with native 240Hz refresh rate. ROG Swift PG258Q has a 1ms gray-to-gray (GTG) response time and built-in NVIDIA G-SYNC technology to eliminate lag and frame-rate stutter. The monitor has built-in ROG lighting effects on its stand to add ambience to gaming setups and features ASUS GamePlus hotkey for in-game enhancements like a crosshair overlay, an onscreen timer, a frames-per-second (FPS) counter and a display-alignment function. It also has ASUS GameVisual technology to give the user up to six preset display modes (Scenery, Racing, Cinema, RTS/RPG, FPS (First-Person Shooter) and sRGB) to suit different game genres. A gaming PC powered by a 6th-generation Intel Core i7-6700K processor and the latest NVIDIA GeForce GTX 1080 2-Way SLI graphics for jaw-dropping 4K UHD gaming visuals. It features one-click overclocking for both the CPU (full-core to 4.6GHz) and GPU without having to reboot. In addition, it has a front-ported audiophile-grade ESS Sabre headphone DAC and amplifier for immersive sound, and dynamic eight-million-color LED effects across four zones on its chassis. The G20 9.5-liter gaming PC with a 6th-generation Intel Core i7 processor and up to the latest NVIDIA GeForce GTX 1080 graphics for truly immersive gaming experiences. It has an M.2 PCI Express Gen 3 x4 SSD and USB 3.1. There is even the exclusive ASUS Aegis II utility with GameAlive so that users can record, edit and share gameplay videos on social media. In addition, the dynamic eight-million-color LED effects can be synced with the music currently being played. 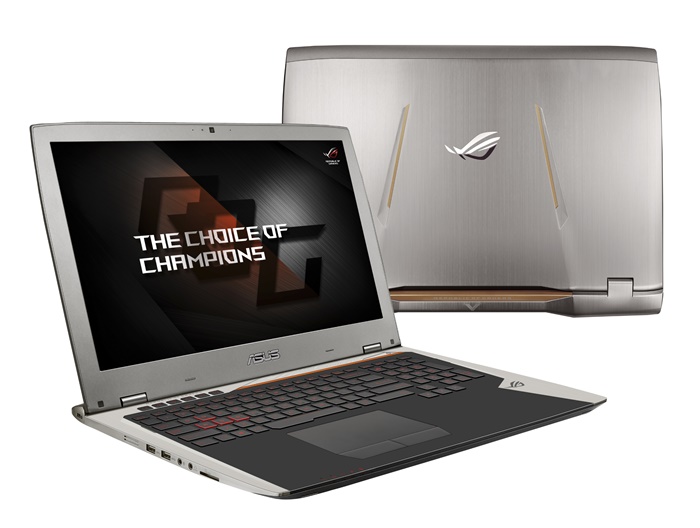 Designed for a stylish and portable gaming laptop that is geared for VR-Ready gaming, It features an overclockable Intel Core i7 processor and NVIDIA GeForce GTX 1080 graphics for truly immersive gaming experiences. At just 1.3-inches thin, it stands as the world’s thinnest gaming laptop to feature GeForce GTX 1080 graphics. It is also the world’s first laptop with a super-fast 120Hz panel that supports NVIDIA G-SYNC technology for fast-paced games, and an anti-ghosting keyboard with 30-key rollover technology. 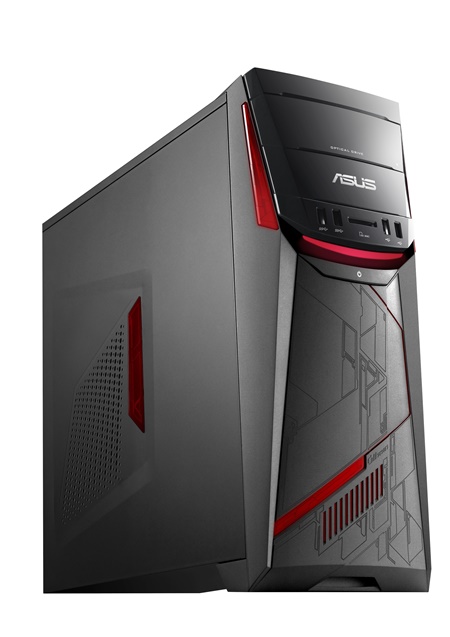 Last but not least, the G11 gaming PC is powered by a 6th-generation Intel Core processor and features up to NVIDIA GeForce GTX 1080 graphics and DDR4 SDRAM for unstoppable WQHD gaming. It has an M.2 PCI Express Gen 3 x4 SSD and USB 3.1. It also includes the exclusive ASUS Aegis II utility with GameAlive so that users can record, edit and share gameplay videos on social media. ASUS G11 features dynamic eight-million-color LED effects and a side panel with a 3D-illusion effect.

Prices and availability for Malaysia is not made known yet, but we will keep an eye on that. Stay tuned for more coverage at Technave.com.