Beam eScooter review - Is it safe to ride in Malaysia? 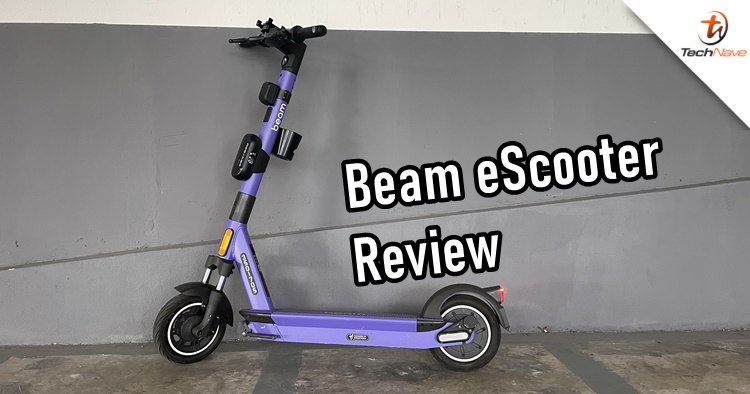 Why are we reviewing a Beam eScooter (a.k.a. Beam Saturn+, but let's just call it the eScooter) and can you even buy this? Well, we are a tech media website, after all... And no, you can't buy one here. To be frank, I was also surprised when Beam Malaysia contacted us to review it. But I guess it was to test out how well and safe the eScooter is due to increased usage in Malaysia recently.

Before I get started, let me share the story of my first time using the Beam eScooter. The year was 2020, just before the pandemic happened, and I got invited by AMD to check out the Ryzen 4000 Series Processors in Texas. I used to have a Xiaomi Electric eScooter, so I'm quite experienced with them. And I was delighted to know that I could get around some areas in Texas with the Beam eScooter just outside of a hotel. 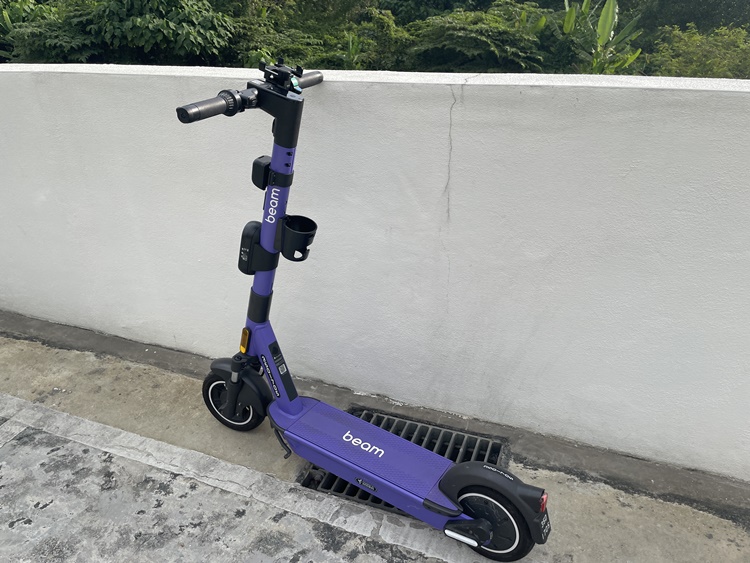 I didn't use it that much, though, because I had to pay in USD. But I still remember how big and sturdy it was. Compared with the Xiaomi Electric eScooter, the Beam eScooter is a lot more robust. I remember drifting on the wet road a bit when making a turn; you have to take my word for it because it was a pretty cool moment.

Fast forward to today, the Beam eScooter is how I remembered it but with some new things. Now that I get to fully explore the whole vehicle, there are a couple of interesting features that I got to try, starting with the app. The Beam app is fairly straightforward, and by tapping at the Settings on the top left, you will see a bunch of options for you to get started. But since I'm reviewing it, I don't have the customer rider feature to show you where and how you should pay for it. 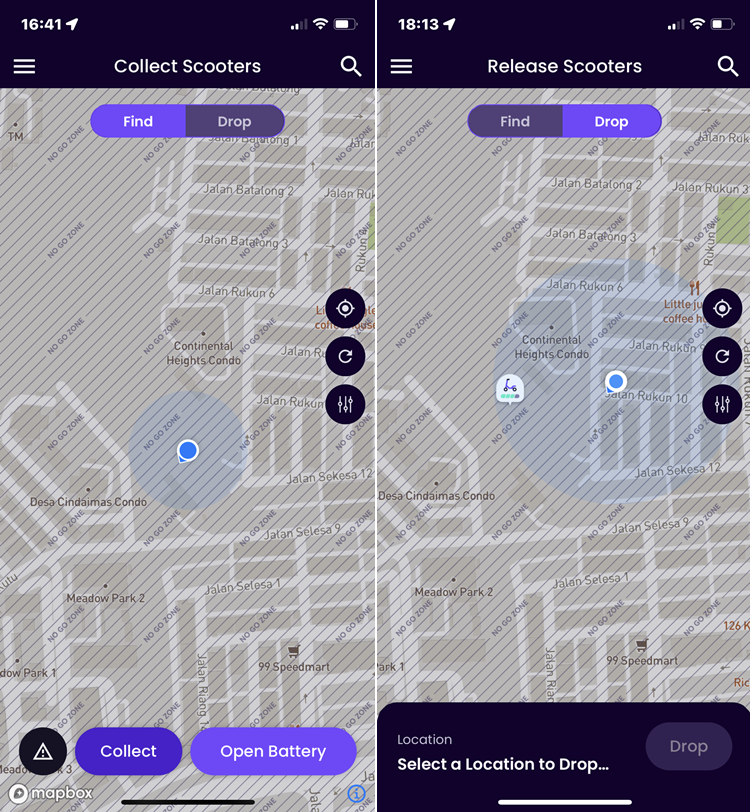 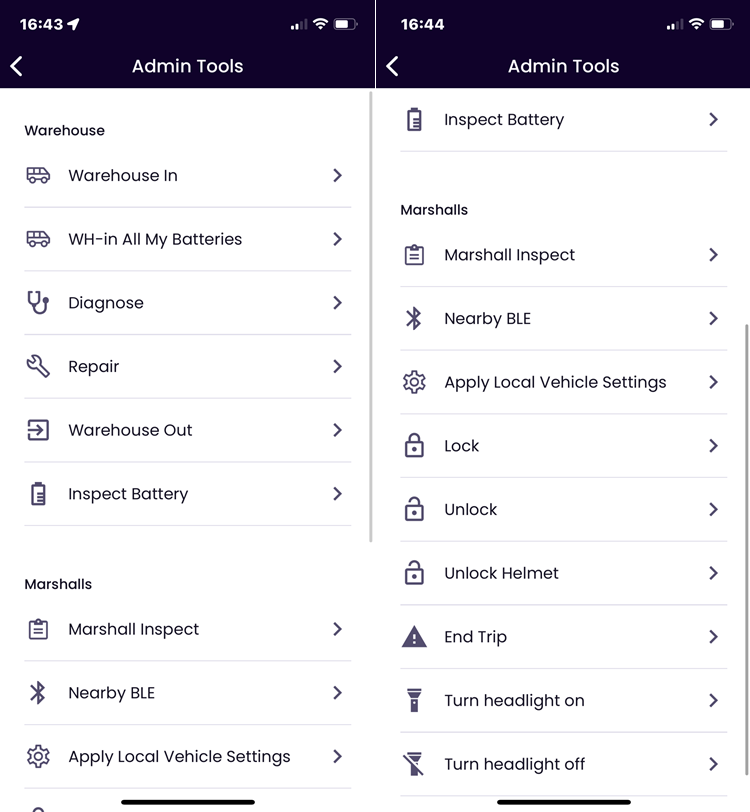 The Tools in the Settings

That goes the same for the Tools section because those are for the admin so it's also not available to normal riders. The Tools for admins are like diagnosing or inspecting the battery. For me, the most important one is the lock and unlock function which normal riders would have but not entirely (locking still works if you park at a parking location). So if you happen to park the scooter at a designated destination or random place where you're scared it might get stolen, you can very much rely on this because it will set a speed limit (so nobody can ride away with it). Trust me, nobody is ever gonna bother stealing it.

Although the speed limit is set when locked, you can still push the scooter but I doubt the thief would get very far (it's like trying to push a dead cow, figuratively speaking). You can also rely on the Beam app to easily locate it since it's already paired, so don't fret. Additionally, you will find other functions like on/off for the headlight. But you don't really need to use it that much because the Beam eScooter automatically switches it on if you're riding at night. 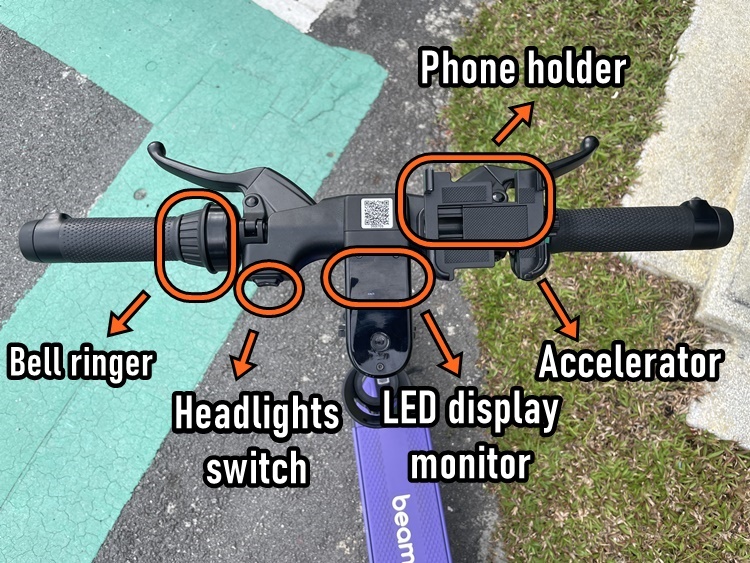 It has two brakes on each handle for some reason 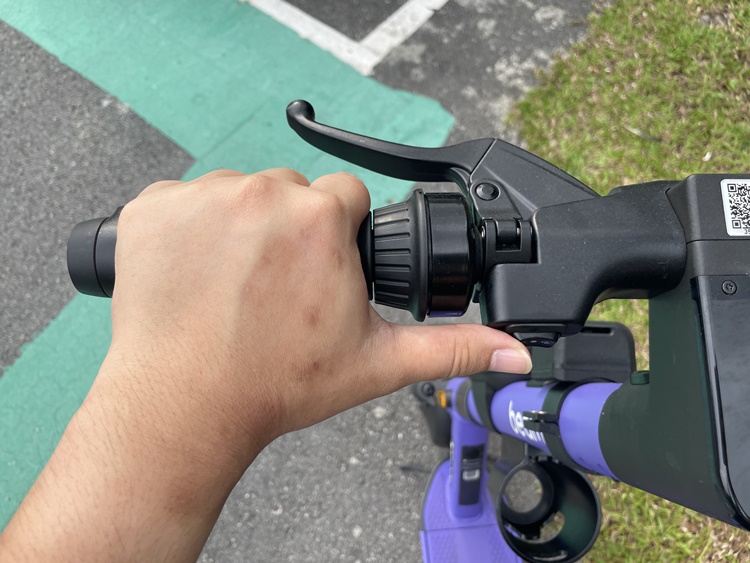 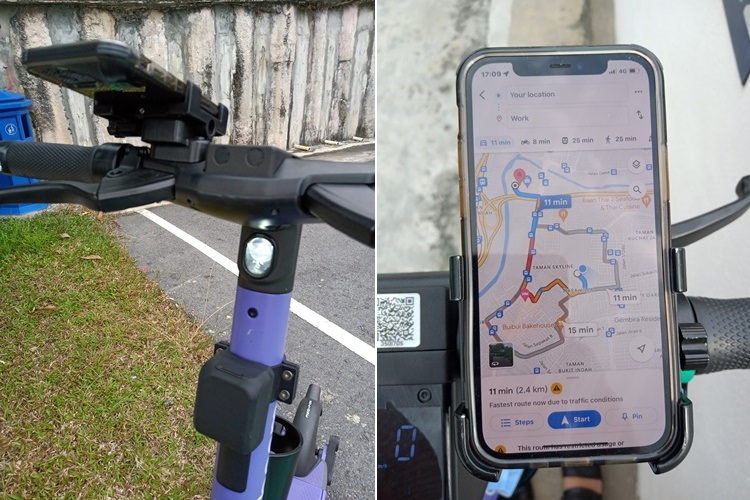 Left: The headlight on the front; Right: An iPhone on the phone holder 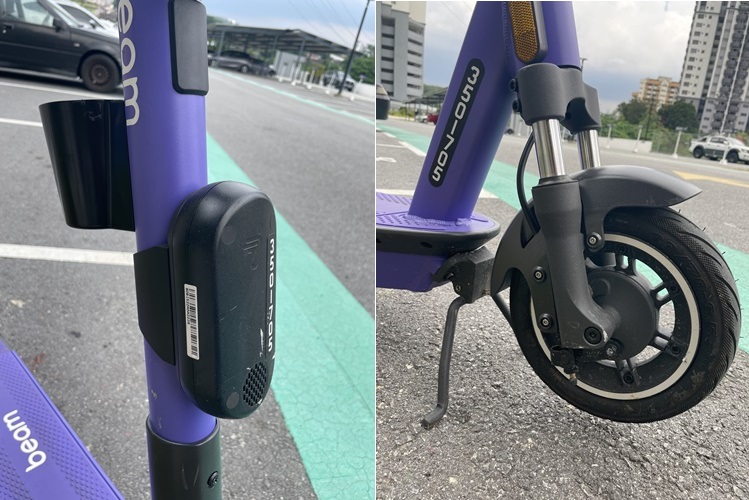 Left: The cupholder and speaker; Right: The stand holder and front wheel The red light behind shines quite brightly, and the wheels aren't the air-pump type 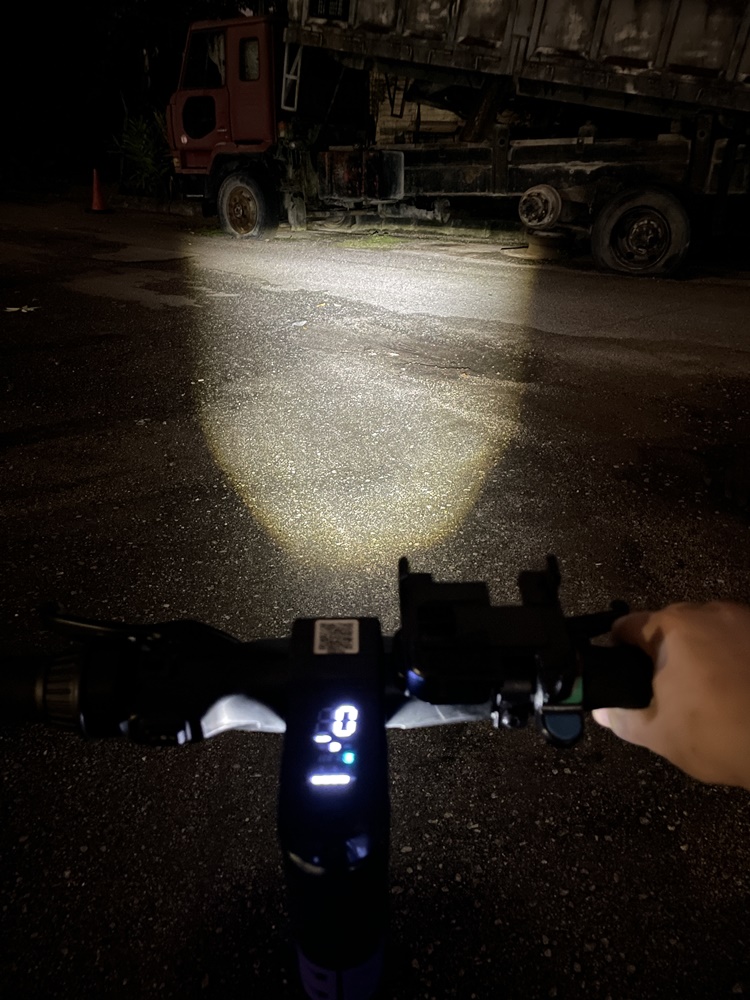 Let there be light

In terms of riding experience, the Beam eScooter definitely feels safe. I've had my fair share of falls, from the Xiaomi Electric eScooter and a non-electrical type with almost uncontrollable speed (not recommended, no matter how cheap it is). Due to the weight, it's able to stabilise speed and momentum quite well, even when taking a corner.

I'm not sure how fast the Beam eScooter can go, but that doesn't really matter. For safety, the micro vehicle has a limitation of 25km/h, no matter how hard you try. Even when going downhill, the scooter can detect the velocity and try to slow down. Personally, I find this very helpful as it helps prevent potential accidents down the road. Also, it's powerful enough to go uphill, but not when it's too steep. 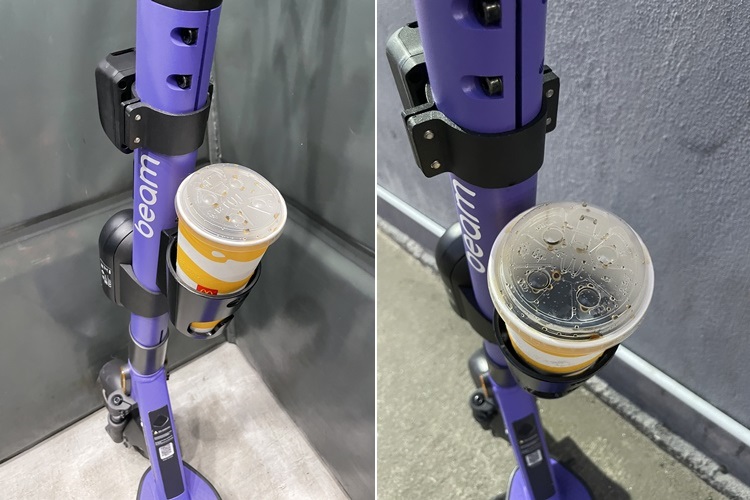 Before and after putting a cup of coke in the cup holder, I was really worried that it would spill, but thank goodness it didn't 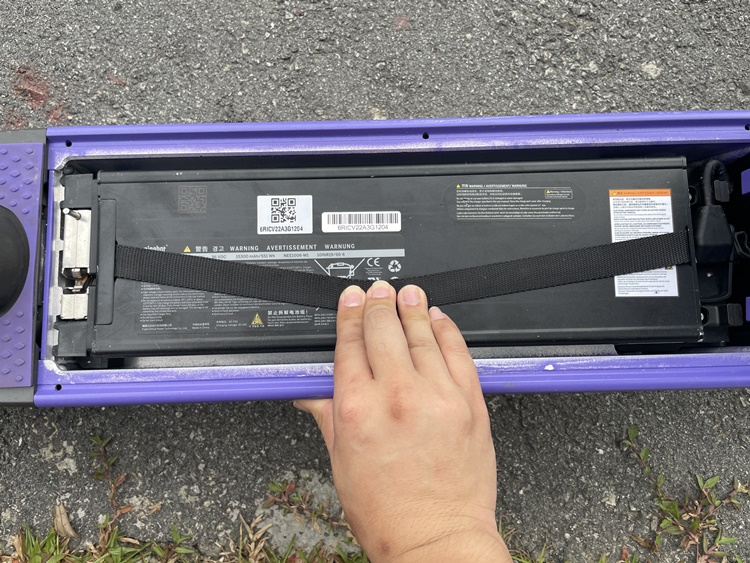 The battery pack is huge!

Fortunately, I don't think you really need to worry about the battery performance. The Beam eScooter has a 15300mAh battery, so it has plenty of juice to go around, even when half-full. Even if you have the eScooter with you for the whole month (and you can't turn the Beam eScooter off), you only need to charge it overnight once a week, and you're good to go. Of course, it varies on how often you ride it.

All in all, Beam Malaysia is doing a good job of making the eScooter an enjoyable and safe riding experience. However, the same cannot be said for many Malaysian roads. Per Malaysian law, micro vehicles have been prohibited on the main roads. But even so, most Malaysian roads don't exactly have the most pedestrian-friendly paths. Broken sidewalks, chairs and tables on the pathways, motorcycles parking illegally, even non-existent walkways and many more. The best way to ride the scooters is in a park or around your neighbourhood. 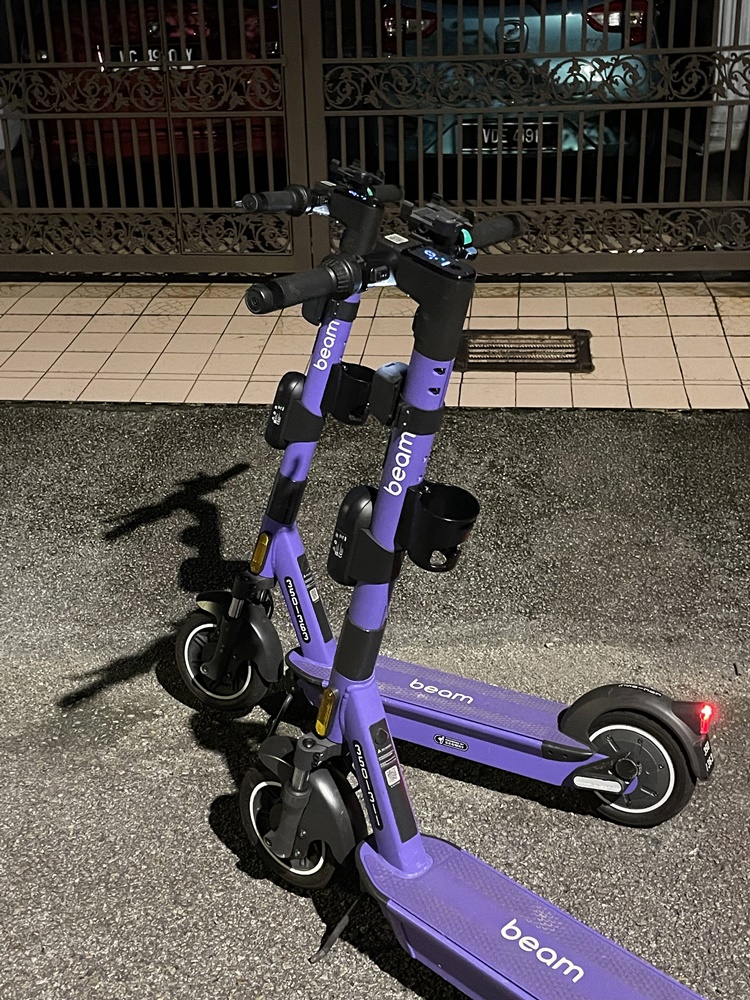 Wanna ride with me?

But what do you think of Beam eScooter? Are you keen on taking it out for a spin with your friends and family? Let us know in the comments below, have a Happy World Car Free Day (Google it), and stay tuned for more tech gadget reviews at TechNave.com.