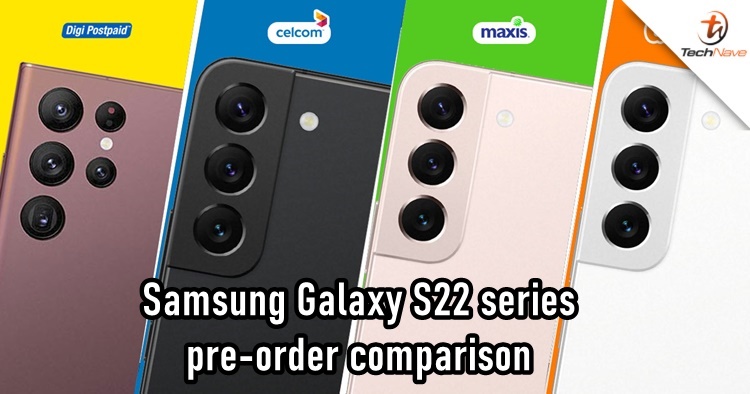 Update: U Mobile plans added in

It's that time of the year again and Samsung is kicking off 2022 with the Samsung Galaxy S22 series. As always, our local telcos have already begun the pre-order deals so if you're wondering there's any difference in them, check them out below in no particular order.

As for the pre-order freebies, it's pretty much the same as Samsung Malaysia's. For Galaxy S22 Ultra, this includes an RM800 Samsung e-voucher, a Silicone Cover with Strap worth RM169 and Lucky Box (Wide Strap) worth RM79, and LAMY Universal Pen worth RM269. Then for the non-ultra variants, they will get the same thing except for the stylus (replaced with a Camera Filter Mount worth RM169). More information can be found right over here at its website.

From the yellow man's corner, the pre-orders can be made through the Digi Store Online (DSO) from RM99/month. Customers get to enjoy a total savings of up to RM1323 as well as receive up to 85GB of all-access mobile data. If you prefer to purchase the Galaxy S22 series in person, the devices will be available in all Digi Stores from 4 March 2022.

Digi also follows the same pre-order freebies as Samsung Malaysia, so there isn't much to say. However, the company is releasing the Galaxy S22 Ultra 512GB model for both Digi Postpaid 120 and 150 plan for RM172/month and RM164/month respectively. For more information on the Samsung S22 Series pre-order, visit the official website here.

Maxis - The most postpaid plans available

Same as Digi, Maxis is also selling all the Galaxy S22 series in 256GB and the 512GB model for the ultra variant. And just like before, Maxis has the widest postpaid plan offers including the Maxis Postpaid 188, 158, 128, 98 and even the Maxis Postpaid Share 48. Should you choose the sharing plan, you only need to pay RM200/month if you're choosing the Zerolution 36-months offer. That said, it's not part of the normal contract.

Colour availability may be limited to each model but if you want to know more about Maxis' pre-order plans for the Galaxy S22 series, you may visit the official website right over here.

We have come to the end of the comparison but if you're wondering where is U Mobile, that's because the company hasn't published the pre-order details of the Galaxy S22 series. However, it's safe to assume that the freebies would be the same RM800 Samsung e-voucher, Silicone Cover with Strap and the Lucky Box. We will update this page again once the details are released.

U Mobile has finally released its Galaxy S22 series pre-order details. The freebies are exactly the same but perhaps the reason that you might want to subscribe to the orange telco are the postpaid plans. On the official page, you can either sign up for the Unlimited Hero postpaid or the UPackage plan.

For each plan, it comes with both P99 and P139. Both of these have unlimited internet mobile data, 0% interest-free instalment and no upfront payment which may cater to you. If you're going for the Galaxy S22 Ultra, you can get the device from RM3629 or RM179/month from Unlimited Hero and UPackage respectively. For more information, you can visit the website here.

Last but not least, if you are planning to pre-order directly from Samsung Malaysia Online Store itself, here's some news. We are also collaborating with Samsung Malaysia to give away a Media Referral Gift Code: GS22VIPTN. Only the first 800 customers may claim it and this code entitles you to redeem a 45W Super Fast Charger worth RM199 on top of the current Pre-Order promotion. Also, this code can only be used before the checkout at the Samsung Online Store.

So which one are you getting? Let us know in the comments below and stay tuned for more trending tech news at TechNave.com.