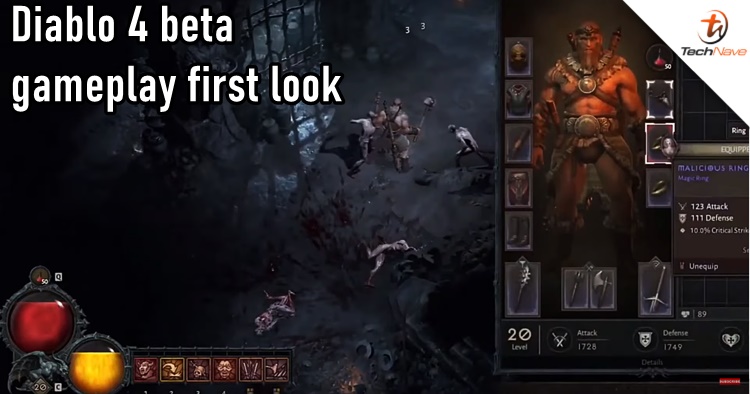 From a half-baked WarCraft 3: Reforged Refund and to commenting "Don't you all have smartphones?", a lot of gamers and fans are losing faith in Blizzard Entertainment. However, there are still some looking forward to Diablo 4 which was announced last year at Blizzcon 2019. Several months have passed now without much information but we have finally got a glimpse at the beta version thanks to a YouTuber.

From the 20-minute gameplay footage, the player showcased possible the first mission "A Light in the Dark" using the classic Barbarian class. Compared with the previous screenshots, this newer beta version is showing a reminiscence of Diablo 2's "feel" and reports are saying that Diablo 4 will be more solid, richer and darker. In addition, there will be more than 100 towns which signal a very large world for gamers to explore and requires a full internet connection to play.

Obviously, Diablo 4 is using a new engine platform so the game graphics look amazing as usual. There is also a report of the game including microtransactions where players can purchase decorative skin items which is fine by our standards, but other players might think otherwise. Anyway, the story continues from Diablo 3 where Lilith, Mephisto's daughter has been revived and is set to be the main villain in this upcoming instalment.

It will be interesting to see how Blizzard carries this forward. In the meantime, the company is also planning to release Diablo Immortal on the mobile phone platform this year (which we are looking forward to, for game testing purpose). Are you excited about Diablo 4? Let us know on our Facebook page and stay tuned for more trending gaming news at TechNave.com.