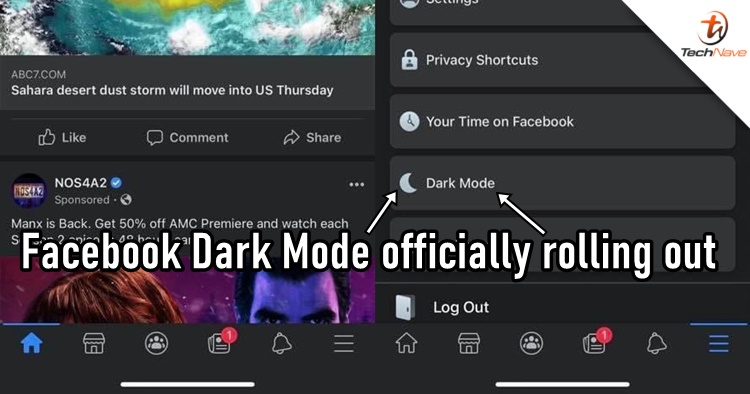 We have been talking about Facebook mobile app dark mode for a while now. It was only two days ago that the company started testing out, but it seems that they have already rolled out the update to a few users. Keep in mind that this is not the same as Facebook lite nor third-party software that enables it, as this dark mode is from the mobile app itself.

Twitter user, @NotFridayCraig first posted his Facebook dark mode on his iOS 14 beta which follows a similar look and "feel" from the desktop version. According to this screenshot, the dark mode won't automatically appear on Facebook unlikes Instagram even if you turned that on in your iOS settings. Instead, you will have to go to the settings and privacy on the app and you will see the dark mode option at the bottom.

Some might think this is a beta test, but sources say that Facebook have officially confirmed that dark mode has started rolling out globally as we speak. At the moment, only a handful of users will receive the update so it will take a while for everyone to have it. It's a bit weird to think that the company's own app is the last one to receive it, whereas Messenger, WhatsApp and Instagram all have it already.

Are you looking forward to dark mode on your Facebook app? Let us know in the comments below and stay tuned for more trending tech news at TechNave.com.