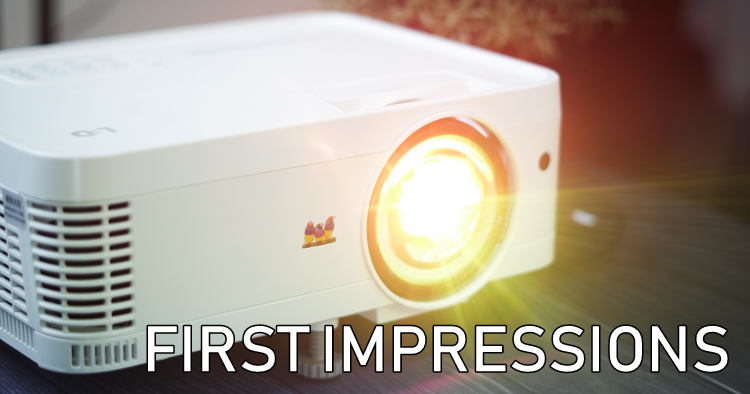 In these current times of economic uncertainty we tend to look for things that are durable, can last a long time and are relatively more affordable to buy. While it isn’t always easy to find something that fits all of those criteria in one device, the ViewSonic LS550WHE could be exactly all that, especially if you need a durable projector.

Featuring short-throw long-lasting LED technology with 3000 ANSI Lumens, we managed to get some hands-on time with the LS550WHE. Here are our hands-on first impressions, so do read on to find out more. 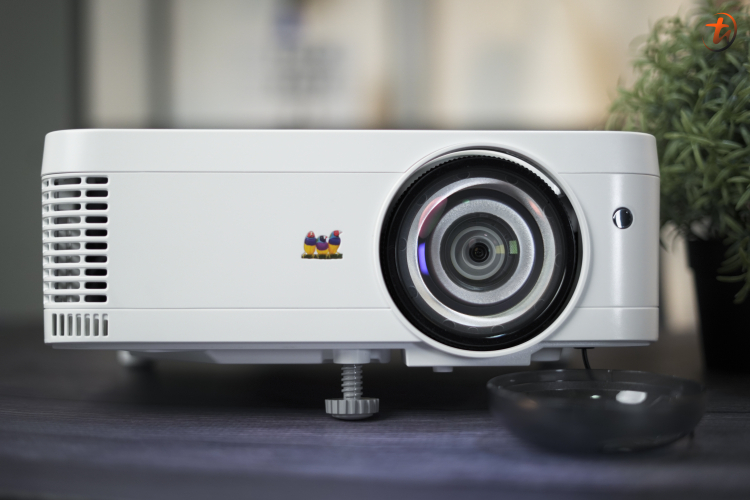 The front of the ViewSonic LS550WHE 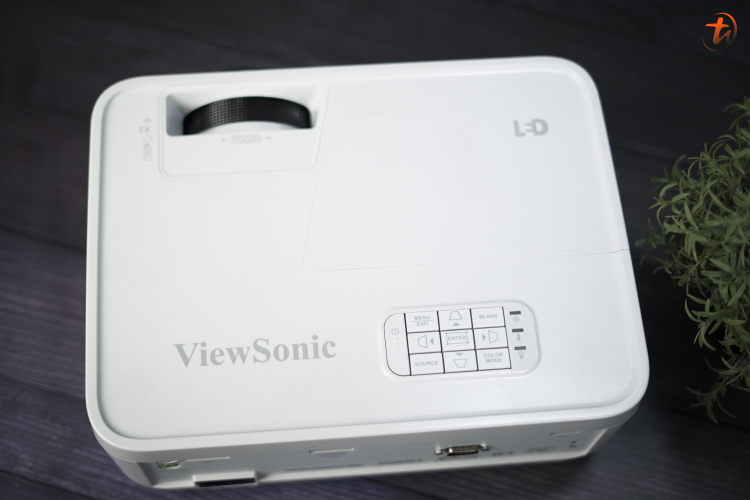 Controls are on the top A closer look at the controls 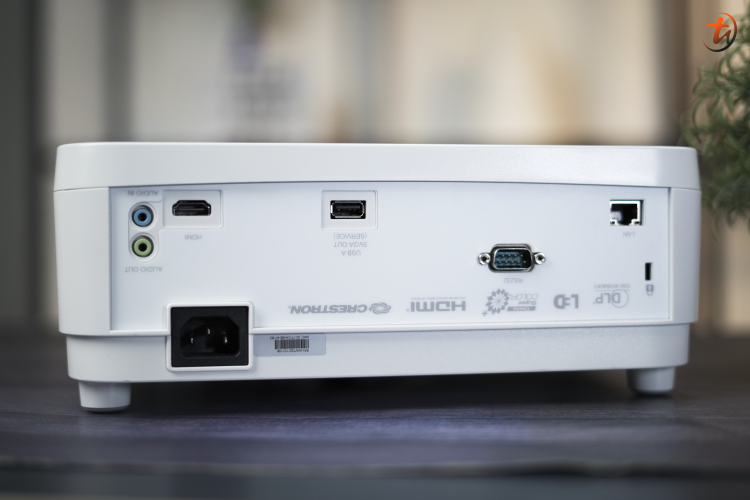 Plenty of connection options on the back

At first glance, the LS550WHE comes in a compact white plastic body with rounded corners. A control panel with physical buttons and status LED lights is located on the top along with a manual focus ring while on the sides there are plenty of cooling vents and the speakers. According to ViewSonic, the internal optical engine is sealed with an IPX5 dust resistance rating, so it can handle dusty conditions.

On the front, there’s the 3000 ANSI Lumens projector lamp which ViewSonic says is rated for a 30,000 hour lifespan. While we couldn’t test this, according to them, if you use the LS550WHE 8 hours a day, the projector could last you for 10 years, but if you use it more than that, the normal max lifespan is a total of 5000 hours. Here's what you'll find in the box 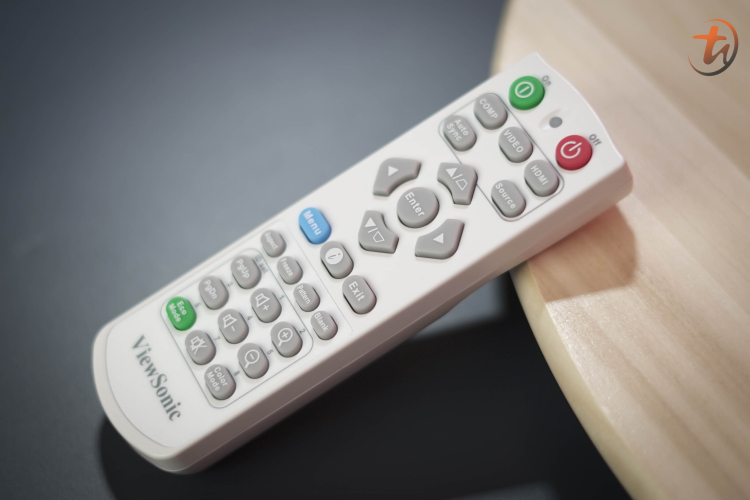 Thankfully, the LS550WHE is a 0.49 short-throw ratio LED projector so it doesn’t need much space to project an up to 300 inch display. On the back of the LS550WHE there’s also an RJ-45 LAN port, HDMI port, USB A port and RS232 analog monitor port. Other connections include an audio-in and audio-out jack along with the power socket.

Measuring in at 293 x 221 x 115mm, the LS550WHE projector doesn’t take up much space and should fit easily on most tables, making it ideal for a home theater or small classroom or business meeting room. You can also mount it on the ceiling and there’s also a fully functional remote control as well. Colours look good in the dark, even in FHD 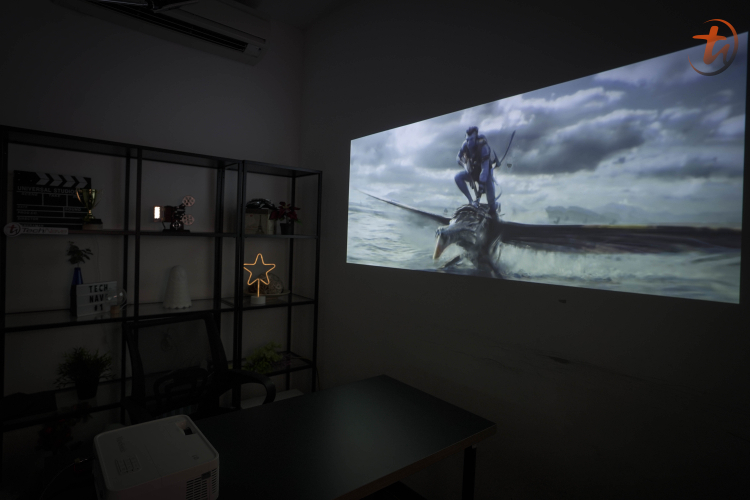 Thankfully, the LS550WHE is both compact and short throw so you don't need much space to show a large display

Trying out the LS550WHE, we found it more than capable of projecting video in full HD 1080p pixel resolutions with clear details and mostly accurate colours thanks to ViewSonic’s exclusive Cinema SuperColor+ tech. The short throw means you can get a 100” display from just 1 meter or so away from the wall or display screen.

The 360 degree projection and H/V keystone features were particularly useful when setting up as it didn’t need much adjustment. In addition, the fast 3-second Instant on/off means that the projector doesn’t need to warm up or cool down that long, something that you tend to see in other projectors. We also found that the LED tech it comes with also means that it is brighter than more traditional projectors 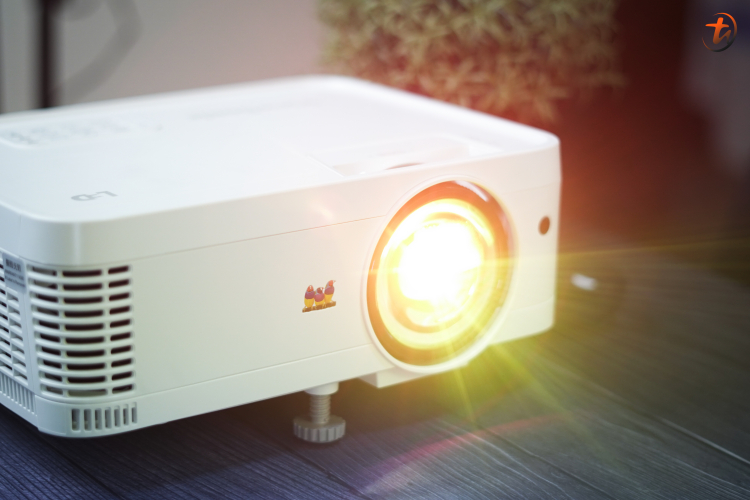 The speakers are somewhat tinny though so while they can playback sounds in a pinch, we’d recommend hooking the projector up to dedicated speakers for better audio. Weighing in at 2.45kg, it can become portable with the optional carry case if you need it to be but we’d still recommend it in a single location for home entertainment, a business meeting room or a classroom as it needs cables to connect.

Overall, the ViewSonic LS550WHE is an interesting projector. For the features that it offers like short-throw FHD 300-inch projection and long-lasting LED and anti-dust technology, it does offer a good deal of value. The LED tech should also mean that the projector can also save on electricity costs. If you’re interested, the LS550WHE is normally priced at RM4899, but you can currently get it on Lazada for RM4299 but for more details check it out at their site. As always, stay tuned to TechNave.com for more first impressions on tech.

Here are the tech specs and features of the ViewSonic LS550WHE projector: