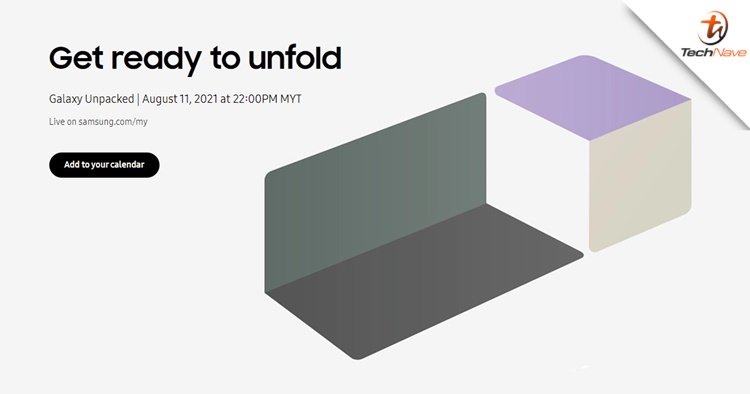 Early this morning, Samsung has finally confirmed the next Galaxy Unpacked event on its multiple official social pages. As expected, the upcoming Galaxy Unpacked will kick off on 11 August 2021 on the official Samsung website. For Malaysia, it will start at 10 PM.

Like all previous event pages, it doesn't really tell you much about the upcoming devices but we do know that the next generation of foldable phones will be announced thanks to the hints. As you can see in the image, the "box" looks like a Galaxy Z Fold and Galaxy Z Flip. Also, Samsung literally just said "Get ready to unfold" in the message.

Ready to go from good to great? Join us as we unfold this #SamsungUnpacked, August 11, 2021.

Rumoured to be called the Galaxy Z Fold 3 and Galaxy Z Flip 3, there have been several leaks about these two foldable phones over the past few weeks. We might have a good idea of what it looks like thanks to the rendered images here, as well as the former supporting an S-Pen, 5G connectivity and a possible under-display front camera. The Galaxy Z Flip 3 is likely to have a bigger external display for notifications and displaying photos.

Besides the Galaxy Z Fold 3 and Galaxy Z Flip, the next-gen Galaxy Watch and Galaxy Buds are expected to make an appearance too. Nothing much is known about them, so we will have to wait and see what are the new improvements Samsung made. By the way, if you register your interest in the website, you are entitled to redeem an additional RM300 Samsung e-voucher after pre-order of the next Galaxy.

Are you excited about the next Galaxy? Let us know in the comments below and stay tuned for our official coverage at TechNave.com.