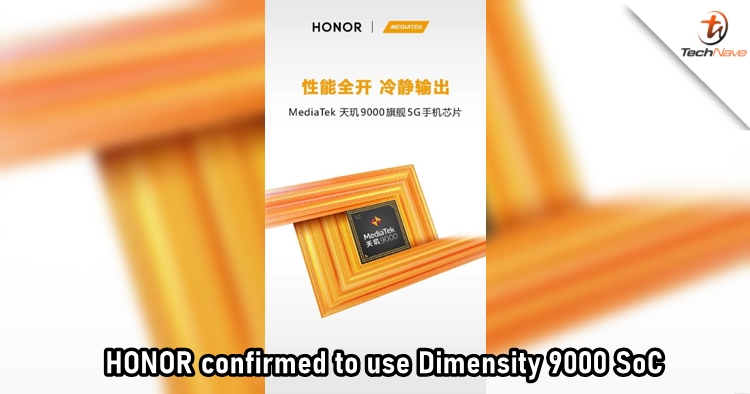 Both Qualcomm and MediaTek have announced their latest flagship chips, and many smartphone manufacturers have also confirmed that they will launch smartphones with the chips shortly. Today, HONOR has officially released a poster, revealing it's launching a smartphone with the Dimensity 9000 as well.

The Dimensity 9000 is probably MediaTek's best work so far. Before it enters the market, the chip has scored 692 points on AI-BenchMark. Meanwhile, the Snapdragon 8 Gen 1 only scored 560 points, which is quite far behind MediaTek's offering. However, it's said that it may be difficult for average consumers to feel the gap in AI performance in daily use. Therefore, we still have to wait to see how the chips perform on actual devices.

It's not like HONOR will totally rely on MediaTek for its upcoming smartphones. According to another source, the first HONOR foldable, HONOR Magic Fold, will be powered by the Snapdragon 8 Gen 1 chip. The device is expected to arrive early in 2022, but we still don't have much information about it yet.

Are you excited about these flagship HONOR smartphones coming next year? Leave a comment to let us know how you feel and stay tuned to TechNave.com for more smartphone reports.