The HUAWEI P50 series has finally arrived! As rumoured, the series will skip 5G this time due to the trade ban imposed by the US. However, the tech specs and the features of the devices might be enough for us to forget the fact that it doesn't support the latest telecommunication technology. Now, let's look at what P50 and P50 Pro bring to the market this time.

The HUAWEI P50 is powered by a Qualcomm Snapdragon 888 4G processor and paired with 8GB of RAM and 128/256GB of internal storage. It also sports a 6.5-inch OLED FHD+ resolution display with a 90Hz refresh rate and a 300 Hz touch sampling rate. Under the hood, it packs a 4,100mAh battery that supports 66W fast wired charging.

Along with the vanilla P50, the HUAWEI P50 Pro is presented in two variants with one powered by the Kirin 999 and another one by the Snapdragon 888 (4G variant). The Pro model has a 6.6-inch flexible OLED FHD+ resolution curved display and supports a higher 120Hz high refresh rate with a 300Hz touch sampling rate. It has a 4,360mAh battery that not only supports 66W wired charging, but also an extra 50W wireless charging.

The quad-camera setup on the back of the P50 Pro brings a 50MP primary camera, a 40MP monochrome sensor, a 13MP ultrawide angle camera, and a 64MP telephoto camera with an OIS image stabilization and 3.5x optical zoom. It also supports 100x digital zoom. On the front, it uses the same 13MP camera as the vanilla P50. It is worth mentioning that the P50 Pro also features XD Fusion Pro, which is an image fusion system that can double the gathered light and also increase the dynamic range by 28%, compared to the P40 Pro. 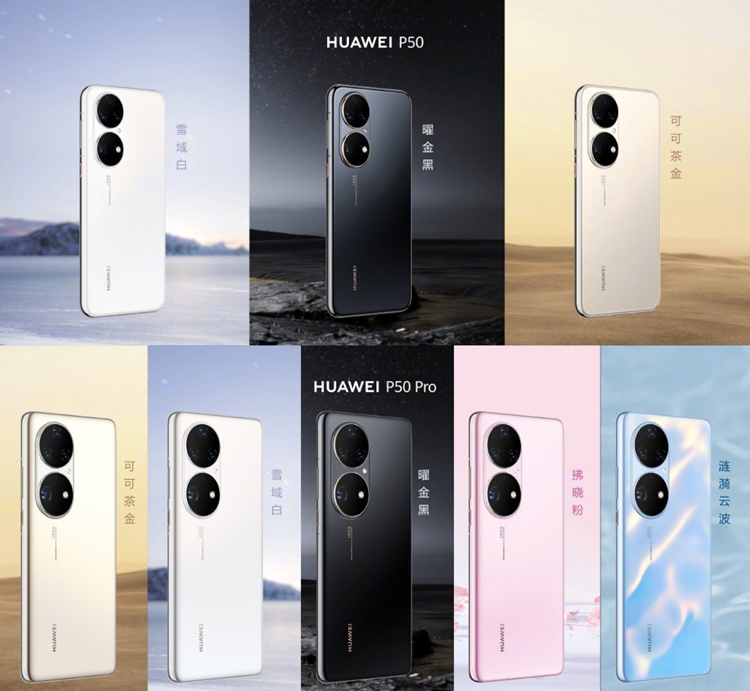 The P50 starts at 4488 yuan (~RM2,944) and will be available in three colour options - White, Black, and Gold. Meanwhile, the P50 Pro starts at 5988 Yuan (~RM3,928) for a model with 8GB of RAM and 128GB of storage and is available in five colour options - White, Black, Gold, Pink and Blue. The two devices will go on general sale with HarmonyOS 2 out of the box in China on 12 August. It’s unclear when will the series gets a global release.

What do you think about the HUAWEI P50 series? Share with us your opinion on our Facebook page and stay tuned to TechNave.com for more smartphone launches.