The Huawei Mate 30 Lite had its tech specs leaked in an unreleased promo. The promo basically bares all there is about the device except for the price and release date of the smartphone.

From the image, we can see that the Huawei Mate 30 Lite may feature a punch hole display, similar to the HONOR View20 and HONOR 20 series. It measures at 6.26 inches with a FHD+ display. On the back is a quad rear camera setup set in a square shape, similar to the Huawei Mate 20’s. The sensors equipped at 48MP + 8MP (super wide angle) +2MP (macro) + 2MP (depth) whereas the selfie camera in the cut out is 32MP. Besides that, instead of following 2019 smartphone trends of a side mounted or in-display fingerprint readers, the Mate 30 Lite comes with a rear mounted scanner instead. 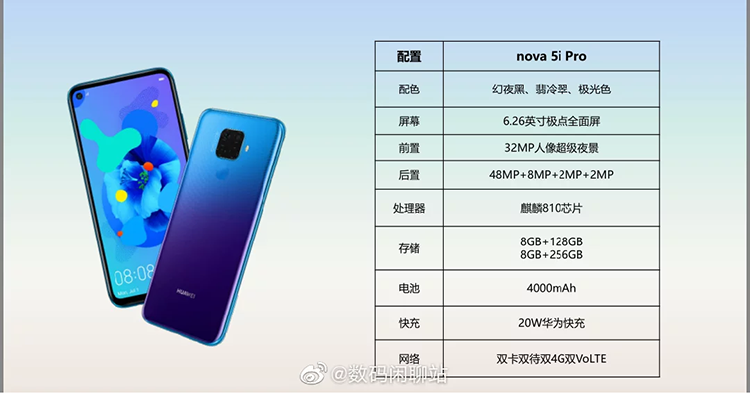 We can expect the device to be released in 3 colours: Aurora, Emerald and Midnight Black. From what we can tell, the device may be released as the Huawei Nova 5i Pro in China and the Huawei Mate 30 Lite in other parts of the world. However, do take this information with a grain of salt as no announcements have been done by Huawei. How much do you think this device would cost? Keep up with the latest Huawei news on TechNave.com!