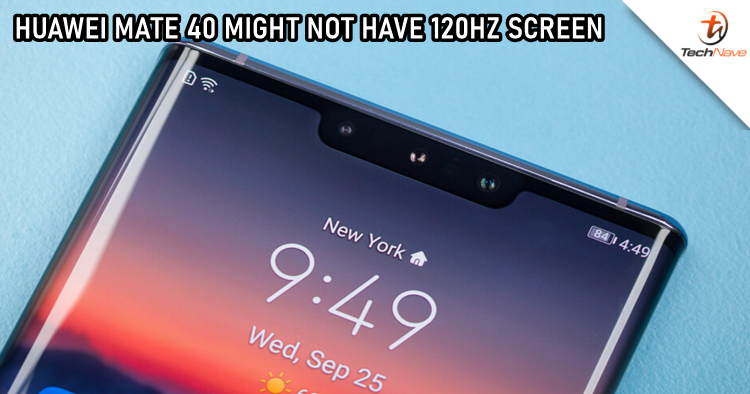 Despite having a tough year (yea, us too), Huawei is still going to launch their devices according to schedule. The Huawei Mate 40 series is expected to be launched in October with an amazing 5nm process. Other than that, we've also heard rumour saying that the series will feature 120Hz refresh rate screens. However, here comes another source saying that it's not true.

According to a tipster RODENT950 on Twitter, the refresh rate might only be 90Hz instead of 120Hz as reported earlier. If the tipster has somehow got it right, it means that the upcoming Mate 40 series will have a similar panel that was found on the P40 Pro lineup with 1200 x 2640 pixels and 90Hz refresh rate. True or not, it is just a rumour so we still have to wait until the launch to know the truth.

Other than that, the Mate 40 series is expected to have a new technology called the FreeFrom lens. It was described to reduce distortions such as fisheye effect or slight blurring on the edge when it comes to taking wide-angle pictures. Therefore, the 5nm process and FreeForm lens technology are still going to make the device a good one no matter having a 120Hz screen or not.

Let us know what you think about the news on our Facebook page. Stay tuned to TechNave.com for more latest smartphone updates.