Current Location: Home > News > Is it raining 6-inch phablets? Coz here comes the OPPO R9s Plus to Malaysia!

Is it raining 6-inch phablets? Coz here comes the OPPO R9s Plus to Malaysia! 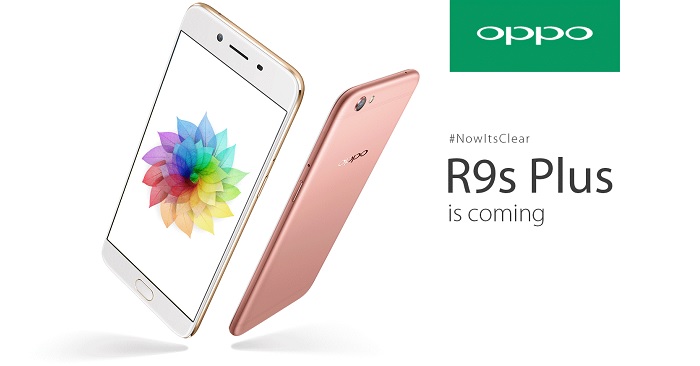 OPPO Malaysia had been teasing that “Something Big is coming” on their official Facebook page yesterday. Well, it’s no secret now, the OPPO R9s Plus is coming to Malaysia! We have received media invites for the launch event happening next week. 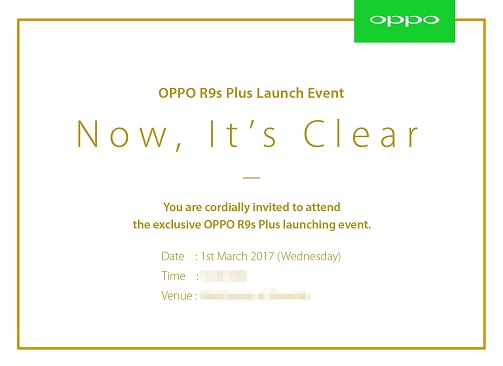 The R9s Plus looks pretty much identical to the OPPO R9s that is already available here. So, what gives it the “Plus” moniker? Is has a slightly larger 6-inch screen that retains the Full HD resolution from its smaller brother. It is also the first device from OPPO to feature 6GB of RAM, though storage remains at 64GB. While the smaller R9s runs a power-efficient Qualcomm Snapdragon 625 processor, the R9s Plus comes with the powerful Snapdragon 653 processor that offers more raw power. It packs a larger 4000mAh battery (with support for OPPO’s proprietary VOOC fast charging) to keep up with the increased power consumption from the larger screen and also more powerful processor. Last but not least, while it retains the same 16MP cameras for both front and back, the R9s Plus will have a steadier shot, as there’s the added advantage of having Optical Image Stabilisation (OIS).

The new device will be officially unveiled on 1 March 2017, OPPO Malaysia's R9s Plus endorsers, local celebrities Ayda Jebat and Min Chen will also be present during the launch event. There’s no pricing details available as of now, but based on a dealer listing found on Facebook, it is estimated to be priced at RM2498. 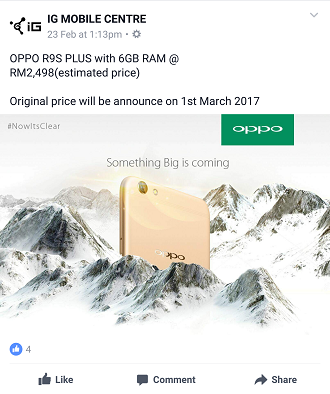 The alleged estimated pricing from Facebook page of a dealer

Looks like this March, we will see some exciting competition in terms of 6-inch phablet segment. Given the price and similar specifications between the OPPO R9s Plus and Samsung Galaxy C9 Pro, what would your choice be if you’re shopping for a 6-inch phablet? Drop your comments below or on our Facebook Page. Stay tuned on TechNave.com for more news regarding the OPPO R9s Plus.