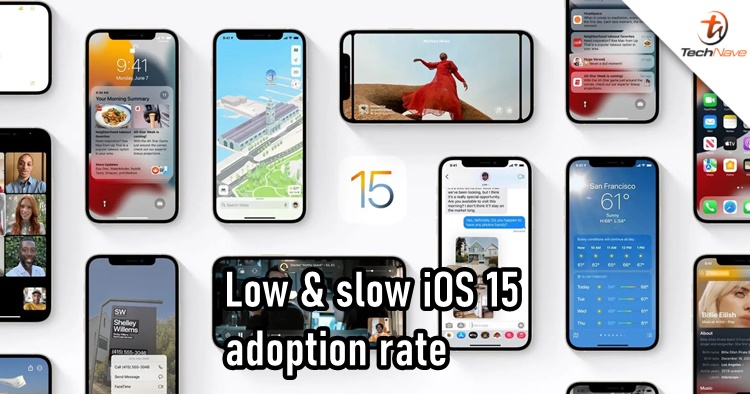 It's been two weeks since iOS 15 got released globally. However, it was reported that not many iPhone users have adopted the new operating system when compared to iOS 14. In fact, it is lower and slower than last year's figures.

This is according to the data from Mixpanel, an analytics company. According to the company, only a handful of 8.59% iPhone users have updated to iOS 15 within 48 hours. Even after two weeks, the figure is still lower than iOS 14 which saw 14.48% in the same time frame last year.

As of 5 October 2021, the figure has increased to 22.22% for iOS 15 users. While that's a good improvement, it is only barely half of iOS 14 adopters after two weeks last year at 41.97%. Of course, this is just a report by Mixpanel that was gathered from apps and websites via analytics API. There is no official report from Apple's side on iOS 15 yet.

While we don't know the reasons for the slow adoption, it is speculated that iOS 15's update is not as impressive as iOS 14 which introduced widgets, Picture-in-Picture, a redesigned home user interface, Spatial Audio and more. For iOS 15, one of the anticipated features - SharePlay, got delayed and many Apple users were looking forward to that. With that, perhaps iPhone users are waiting for iOS 15.1 in the future.

Have you switched to iOS 15 yet? If not, you can check out our first impressions here and read what are the new features. Stay tuned for more trending tech news at TechNave.com.