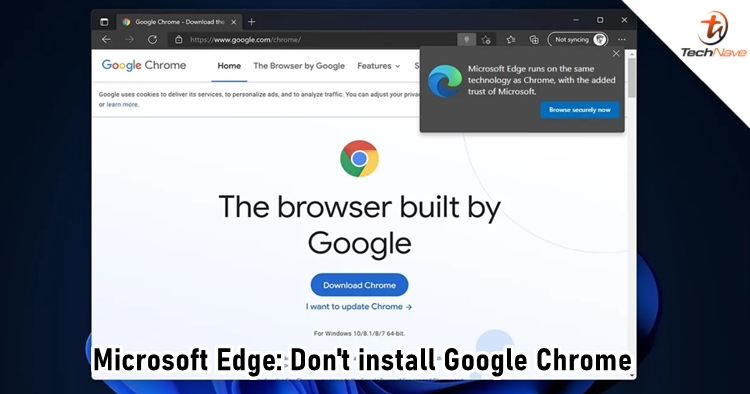 Microsoft doesn't really like the idea of Windows users merely using its Edge browser as a tool to install Google Chrome, and it shows with this new prompt message. According to a report, Microsoft Edge will now show various messages to users by hinting that it's a better browser compared to Google Chrome.

The messages will be displayed when users direct themselves to the Chrome download page. Those include:

The source mentions that these aren't the regular prompts typically find inside a website. They're actually rendered natively by Edge, and other websites aren't able to display similar prompts. Besides this, there was also a report that claimed Windows 11 makes it harder for users to switch to a different default browser. If users don't set it at the beginning when a new browser is installed, they would have to change file type for HTM, HTML, PDF, SHTML, SVG, WEBP, XHT, XHTML, FTP, HTTP, and HTTPS later.

We're curious if anyone who is reading this prefers to use Microsoft Edge? If not, tell us which browser that you usually use by leaving a comment! Stay tuned to TechNave.com for more tech reports.