More Samsung Galaxy S20 series leak - support up to 120Hz, up to 16GB RAM, no headphone jack and more We are steadily picking up more Samsung Galaxy S20 series and in this latest one, XDA Developers have reported a few interesting things. According to reports, they confirmed that the Galaxy S20 Plus will be featuring a 120Hz display with an ultrasonic fingerprint sensor, and also the headphone jack will disappear. There is also some new Galaxy S20 Ultra info, but let's start with the former first.

To get into more detail, the S20 Plus' resolution is 3200 x 1440 with a 20:9 aspect ratio. Like the Galaxy Note 10 series last year, it also has an Infinity-O front camera in the centre and as aforementioned, the refresh rate can be tweaked up to 120Hz. On that note, XDA Developers said that only the FHD+ resolution will support the 120Hz refresh rate, as the higher WQHD+ will only support 60Hz. 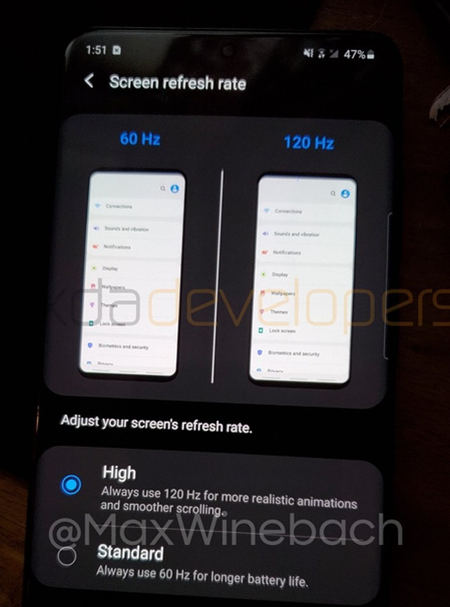 Besides that, the ultrasonic fingerprint sensor is said to be the improved version by Qualcomm compared to the previous model. Previously, there were some complaints about how "slow" the unlocking speed. Finally, the 3.5mm headphone jack won't make a return but at least there is a 4500mAh battery with 25W fast charging technology and 12GB of RAM.

On the other hand, it seems that the S20 Ultra will be quite a beast among the three phones. According to @MaxWinebach, it's going to have up to 16GB of RAM, 5000mAh battery with 45W fast charging technology and an overkill 48MP telephoto lens with 10x optical zoom.

The S20 Ultra 5G is going to keep the SD Card slot. Support for up to 1TB.

The Galaxy S20 series is looking up to kick off with a bang but what do you folks think? Let us know in the comments and stay tuned for more Samsung news at TechNave.com.