Current Location: Home > News > Motorola’s OneCompute adds Moto Mod to the Moto Z to turn it into a computer 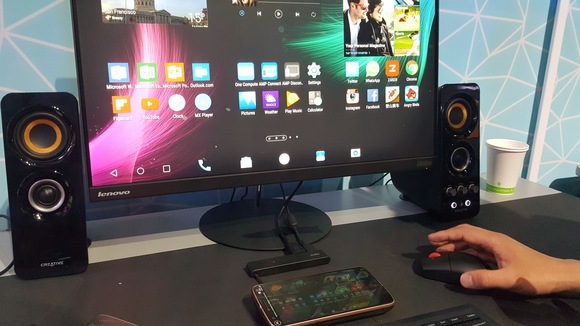 One of the more cool ideas that has popped up from the mobile industry – modularity is now set to be mainstream thanks to the introduction of the Motorola Moto Z. One of the unique prepositions is the idea of expandability – and the OneCompute is a system that can turn the Moto Z into an Android powered desktop computer wirelessly.

Shown during the Lenovo Tech World event, the system works by communicating the Moto Z, through a particular Moto Mod what is embedded with a chip from Keyssa with a dock on the desk wirelessly. The dock gives it power via wireless charging, while at the same time adds on ports through the built-in dock.

You get three USB 2.0 ports, HDMI jack, and a power jack. This sounds and feels like Microsoft’s Continuum where the phone can become a light desktop for work on the go. This Moto Mod is expected to be launch real soon.