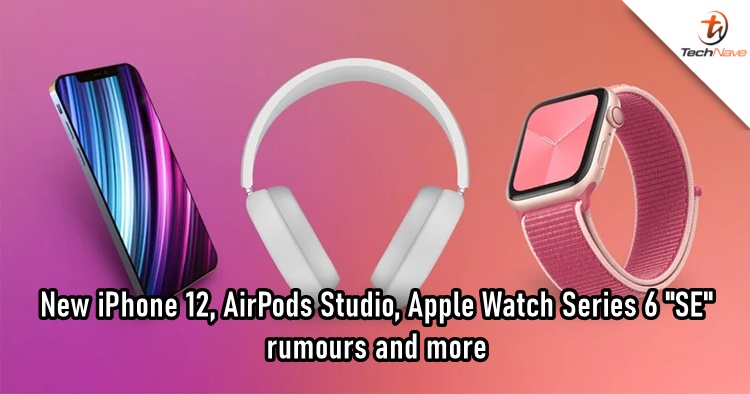 While we wait in anticipation for Apple's annual event in September, rumours have been flying around that the company could separate into two events - one for accessories and the other for the iPhones. Now, new reports from Bloomberg are sharing a more detailed launching plan and here's what we know so far about the upcoming iPhone products.

Of course, the most important one is the upcoming iPhone 12 series. As the rumours point out, there could be four iPhone 12 models - 5.4, 6.1, and 6.7-inch sizes and the first two (which are the lower-end) could actually be released first before the pro versions. Design-wise, Bloomberg said that the rumoured designs that we all seen online are mostly correct with the iPhone 4 design throwback alongside a new dark blue shade for the pro versions only. On top of that, the pro versions should get a LiDAR scanner that is seen on iPad Pro tablets.

Besides the iPhone 12 lineup, reports are also saying Apple is releasing a new 10.8-inch iPad Air that mimics the current iPad Pro with a potential under-display Touch ID. There could be two new Apple Watch Series 6 models as well, one that serves as an affordable option (called SE for now) replacing the Watch Series 3 and the other as the standard variant featuring blood oxygen monitoring. As for accessories, there could be a new AirPods Studio which is a new pair of over-ear headphones, and a new affordable HomePod too.

Onto the other Apple products, a new Apple TV is said to be in development with a faster processor. There's also a rumoured AirTags not much information was given except that it should make an appearance at the October event, alongside the upcoming iPhone 12 variants and Apple Watch 6 series. As for the September launch, it could be the new iPad tablets and potentially the Watch 6 series too. The launching plan rumours are a bit conflicting here, so do take them with a pinch of salt.

According to Bloomberg’s Mark Gurman and Debby Wu, Apple is working on a new Apple TV 4K with a faster processor and a new remote equipped with Find My tracking. The new Apple TV might not launch until 2021. pic.twitter.com/S2Vpd2F8lU

While other smartphone brands are jumping on the 5G bandwagon, Apple seems to be withholding that feature as it was reported that the testers are unsatisfied with the speed improvement. Despite that, Apple could be planning to manufacture 75 million 5G iPhones and they are also anticipating 80 million iPhone 12 units for shipment this year.

Whew, that was a big chunk of new Apple rumoured news but as always, nothing is official until they announce it. But what do you think? Let us know in the comments below and stay tuned for more trending tech news at TechNave.com.