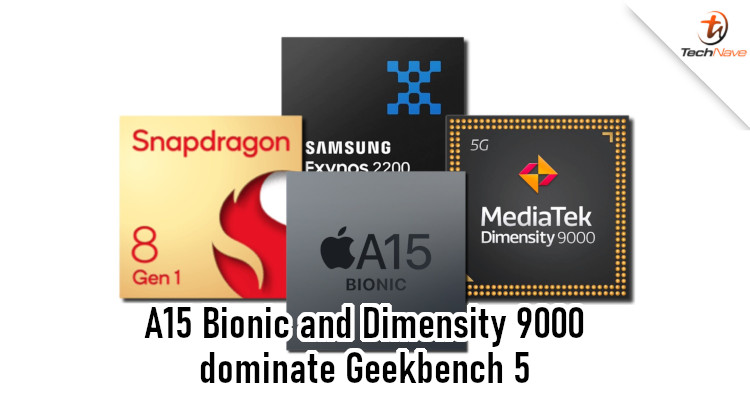 In the span of a few weeks, major chip companies all released their latest mobile chipsets. There's the Qualcomm Snapdragon 8 Gen 1, MediaTek Dimensity 9000, and the most recent Exynos 2200. It's hard to say which chipset is the best, but new benchmarks could answer this question.

Yesterday, tipster Ice Universe posted a tweet showing the Geekbench 5 performance of the latest mobile chipsets. The five chipsets tested include the Snapdragon 888, Snapdragon 8 Gen 1, Exynos 2200, Dimensity 9000, and A15 Bionic. As you can see, Apple's chipset is the best of the bunch, followed by MediaTek's latest flagship chipset.

Geekbench 5 results for some processors pic.twitter.com/y7K6mS1Wya

Of course, the former is not necessarily more powerful since iOS is the more efficient operating system. But if these numbers are accurate, it means that the Dimensity 9000 handily beats Exynos 2200 and Snapdragon 8 Gen 1. Indeed, Ice Universe claimed that the Dimensity 9000 outperforms the new Exynos chipset in multiple areas including the CPU, GPU, and NPU.

The results suggest that Dimensity 9000-powered Android phones would be the best in 2022, but things aren't always that clear cut. Regardless, would this convince you to get a device with MediaTek's new flagship chip? Let us know in the comments, and stay tuned to TechNave for more news like this.