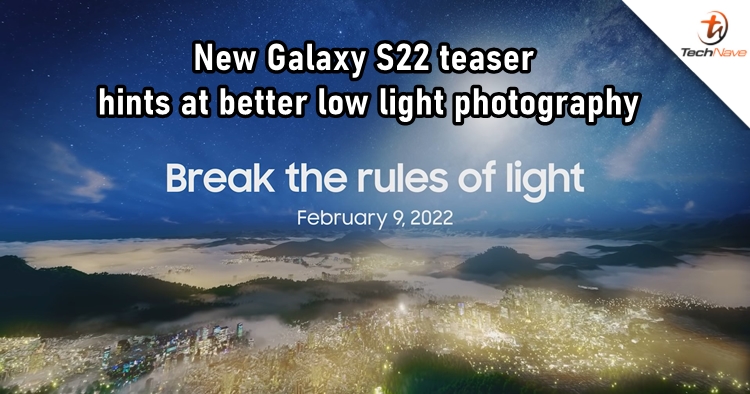 The Samsung Galaxy S22 series finally has a launch date, and it's 9 February. Soon, we'll be seeing the vanilla Galaxy S22, Galaxy S22+, and the Galaxy S22 Ultra if there's no alteration for the naming convention. Today, Samsung has also shared a new teaser to hint at a better low light performance for the upcoming series.

The short video teaser includes slogans like 'Break through the night' and 'Break the rules of light'. They are obviously telling us that the next Samsung Galaxy S series smartphones will excel in low light photography. However, the teaser didn't mention which devices would deliver the performance, other than the S22 Ultra having it for sure.

The Galaxy S22 Ultra is tipped to have a quad-camera setup on the back. Its primary camera will pack a 108MP sensor (f/1.8 aperture, 85-degree FoV, OIS), accompanied by a 12MP ultrawide camera (f/2.2 aperture, 1.4um pixel size, 120-degree FoV). Meanwhile, the other two will be a pair of 10MP telephoto units, with one focusing on lower zoom scenarios, and the other will enable you to zoom in really far.

Are you excited about the launch of the Galaxy S22 series? Drop a comment to let us know how you feel, and stay tuned to TechNave.com for the latest smartphone news.