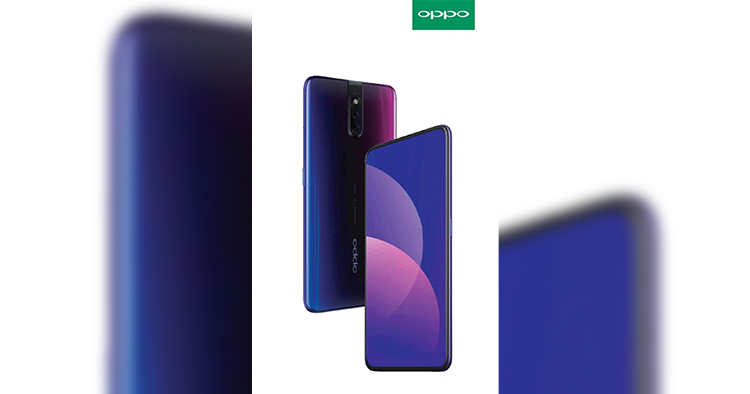 The much anticipated OPPO R19 poster has surfaced online and show similarity to the OPPO F11 smartphone. The back of the smartphone which was shown in the poster show a dual rear camera setup with a 48MP main camera.

The front of the smartphone show a large screen with thin bezels, giving an almost bezel-less display due to the slight chin at the bottom of the device and a thin cutout for the speakers at the top. Like the upcoming vivo V15 Pro, the R19 is expected to carry a pop up camera on the top of the device but it may be placed in the top middle of the phone instead of top right.

Vertically placed in the back and center of the phone, the back may carry a dual camera setup with LED flash. No rear fingerprint scanner can be seen on the back which leads us to believe that the device may have a UD fingerprint scanner. The device in the photo shows a purple and blue gradient device but we may see more colour variants of the smartphone at launch.

There’s been no Malaysia release date or Malaysia pricing so far but we can expect the OPPO R19 to be launched in China before it is launched elsewhere. Due to the stark similarities between the two devices in the leaks, could it be that the OPPO R19 may be a Chinese exclusive smartphone and the OPPO F11 the international version? However, make sure you take this article with a grain of salt. Either way, we’ll let you know ASAP when we find out if you keep on checking out TechNave.com!