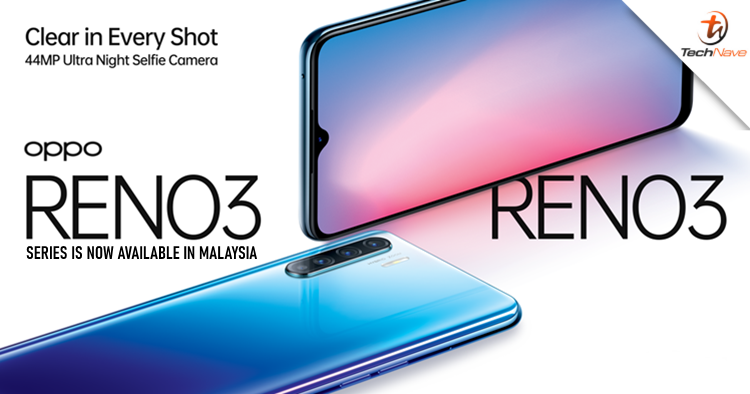 After months of waiting, the OPPO Reno3 series has finally been launched globally! The devices including Reno3 and Reno3 Pro will also be sold in Malaysia starting from the price of RM1,699. Let's find out what kind of powerful tech specs the new Reno3 series has for us!

Both of the devices sport a 6.4-inch Super AMOLED display that is certified by TÜV Rheinland. They also come with a 4,025 mAh battery that supports 30W VOOC Flash Charge 4.0 on the Reno3 Pro, while the vanilla Reno3 will get 20W fast charging. Other than that, the devices will be running on Android 10 as well with Color OS 7.

The Pro variant from the series is powered by a MediaTek Helio P95 chipset that supports 8GB of RAM and 256GB of storage. At the front, there will be a pill-shaped cutout that houses two front-facing cameras which are a 44MP camera sensor and a 2MP depth sensor, which brings an extra camera compared to the Reno3. They offer the ability to take great bokeh selfies with Dual Lens Bokeh.

It has a quad-camera setup at the back that brings us a 64MP main camera, a 13MP telephoto lens, an 8MP ultra-wide lens, and a 2MP mono lens. Camera features including the Ultra Clear 108MP Image Mode will let users shoot images with clearer details. There are also modes like 5x Hybrid Zoom, 20x Digital Zoom, Ultra Dark Mode and more for users to explore. For recording videos, the OPPO Reno3 Pro comes with the upgraded Ultra Steady Video 2.0 as well to tackle shaky-cam footages.

For the vanilla Reno3, it will be powered by a MediaTek Helio P90 chipset that supports 8GB of RAM as well and 128GB of storage. The Reno3 features a waterdrop notch that houses a single 44MP front-facing camera. At the back, there will also be a quad-camera setup, but its main camera will be a 48MP one instead of the 64MP sensor that appeared on the Reno3 Pro. 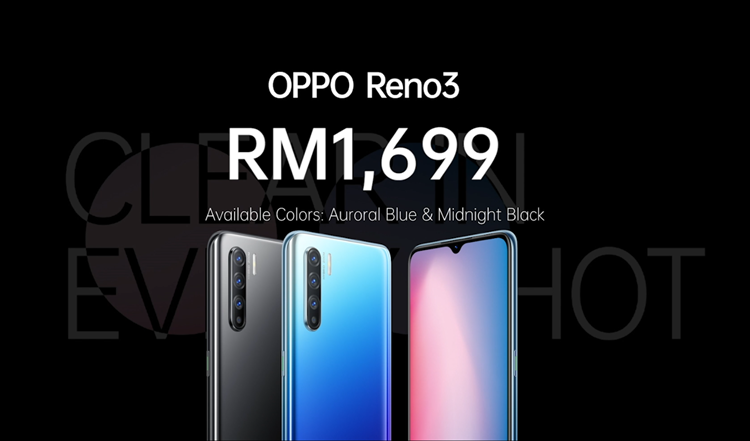 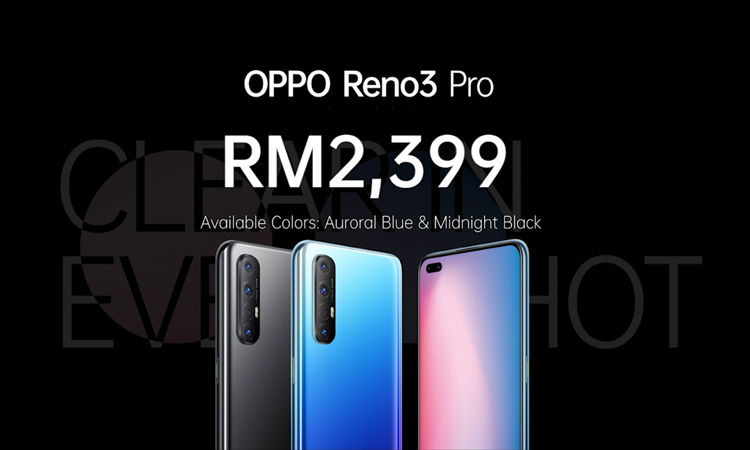 Both of the devices will be available to purchase at OPPO's online store and concept stores, e-commerce sites, and soon with telco companies. The OPPO Reno3 will be sold at RM1,699 while the Reno3 Pro will be sold at RM2,399. For the colours, the devices will come with Auroral Blue and Midnight Black. Now, there is also a promotion that a pair of OPPO Enco W31 wireless earphones that worth RM259 will be free for purchasing the Reno3 devices!

Let us know what you think about the newly launched Reno3 series on our Facebook page. Stay tuned to TechNave.com for more new smartphone launches.