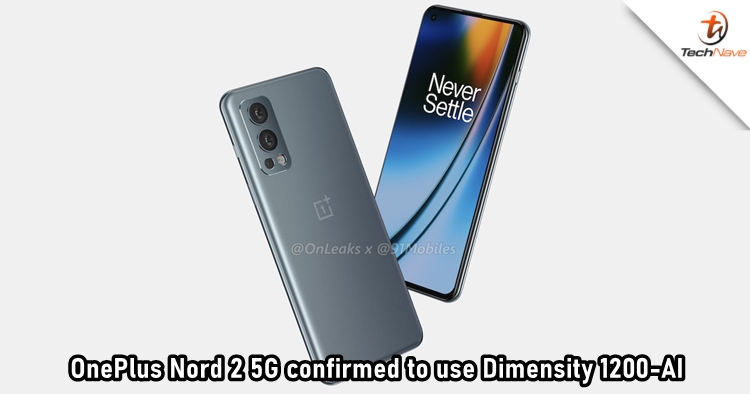 We have been seeing quite a few rumours of the OnePlus Nord 2 lately as the launch is getting nearer. Before that happens, OnePlus has confirmed today that the upcoming device is coming with a MediaTek Dimensity 1200-AI chipset, making it the first OnePlus device that features other brand's chipset besides Qualcomm.

Not only that it's the first device to use the chipset, but it is also said that the Dimensity 1200-AI will be exclusive to OnePlus. The new chipset is basically the Dimensity 1200 but with an extra "AI". According to the source, the chipset will come with AI Photo Enhancement that helps to adjust colour and contrast automatically depending on the scenario, with OnePlus claiming that it will work with 22 different scenarios.

There is also an AI Color Boost technology that can introduce a high dynamic range even when it's not available, as well as an AI Resolution Boost feature that will enhance video resolution in certain apps. If the previous rumour were accurate, the OnePlus Nord 2 5G would be arriving on 9 July, which is just a few days to go.

Let us know what you think about the news on our Facebook page. Stay tuned to TechNave.com for the latest smartphone report.