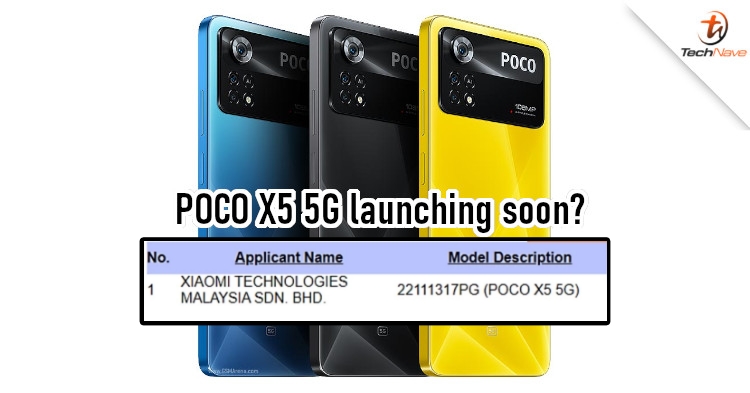 Previously, we reported that the POCO X5 5G has received FCC certification in the United States, signalling the device’s imminent release in the country. Now, the same smartphone has also been spotted in our country’s SIRIM database, meaning that the X5 5G may be released in Malaysia soon too.

As reported by Amanz who first spotted the listing, the upcoming smartphone has the model number 22111317PG in SIRIM’s database and is registered by POCO’s parent company Xiaomi. Specifically, in Malaysia, the company is registered as Xiaomi Technologies Malaysia Sdn Bhd and SIRIM pretty much confirmed that the device is the X5 5G by literally listing the device name in brackets after the model number.

Moreover, the listing also revealed that Xiaomi Malaysia just received approval for the certification yesterday (1 December 2022), with it being valid up until 30 November 2027. However, as of the time of writing, Xiaomi Malaysia has yet to reveal any details or teased about the X5 5G coming to our country.

Nothing much is known about the X5 5G, though based on the aforementioned FCC certification, the device will officially be running on Android 13 OS via MIUI 14. Previous rumours have also touted the X5 5G to be powered by the Qualcomm Snapdragon 778G+ SoC and to feature 120Hz screen, 5000mAh battery and a 108MP main camera.

Well, we’ve just got to wait until its official release in Malaysia to find out the actual specs sheet. So, what do you guys think of the upcoming POCO smartphone? Share your thoughts with us in the comments below and stay tuned to TechNave for more trending tech news in Malaysia and beyond!