Back in MWC 2022 a few months ago, Qualcomm introduced the next generation of WiFi 7 connectivity. The company released more details today, namely four new Qualcomm Networking Pro Series platforms, namely the 1620, 1220, 820 and 620 models. Here's more detail about the technology.

To get into the figures, the highest data speed achievement recorded was 33Gbps on the 1620 platform thanks to the quad-band 16-stream feature. This is followed by 21Gbps (1220 platform, triband 12-stream), 16Gbps (820 platform, quad-band 8-stream) and finally, 10Gbps (triband 6-stream). 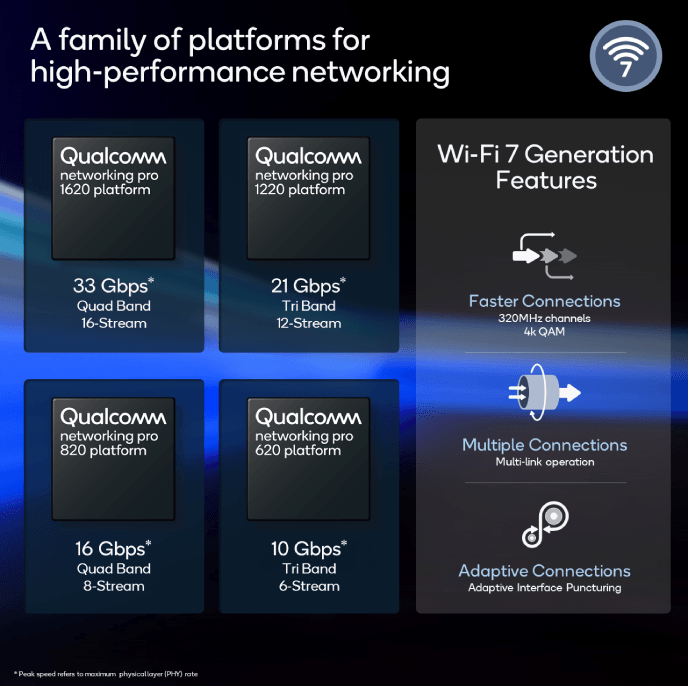 In terms of features, the WiFi 7 now sports faster and has multiple connections. This is due to the new supporting 320MHz channels in 4K QAM and multi-link operation respectively. For the latter, it was designed to deliver massive capacity, stability and extremely low latency, when connected with Qualcomm FastConnect, 7800-based WiFi 7.

As you can see, these capabilities can be utilised in the future when 5G becomes mainstream. WiFi 7 can be great for gaming, streaming, and sharing huge video files, as well as XR applications of tomorrow. Qualcomm AFC Solution is also integrated to ensure enhanced 6GHz operation in both indoors and outdoors. We expect to see WiFi 7 technology in future devices such as laptops from 2023 onwards. Until then, stay tuned for more trending tech news at TechNave.com.