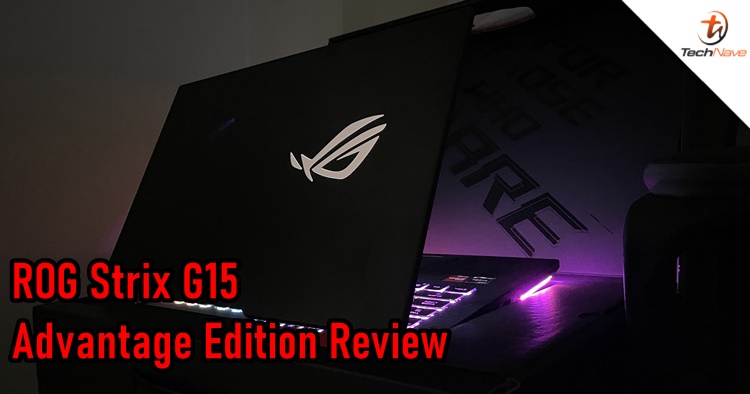 Of all the gaming peripherals and gears, ASUS Republic of Gamers (ROG) is arguably one of the most popular among the brands. In case you haven't noticed, their latest gaming-related devices and accessories just scream "GAMER" all over the product and the ROG Strix G15 Advantage Edition is no exception.

This piece of gaming hardware was only recently unveiled during the Computex 2021 event on the first day of June 2021, alongside the G17 Advantage Edition which has a slightly larger screen panel. It's powerful, it's cool but unfortunately, we were told that these two laptops aren't coming to Malaysia so don't get your hopes up. Nonetheless, you will be reading our review of the ROG Strix G15 Advantage Edition of how it holds up. So sit back, relax and check out what ASUS has to offer at the comfort of your couch.

Before we start, though, it's important to note that this Advantage Edition is different from the ROG Strix G15 (G513) that we have in Malaysia. Both may feature the same processors, but this is not the case for the GPU as the latest one features an AMD Radeon RX6800M GPU (super, super new). There are a couple of other differences as well but we will get into that later. First, let's talk about the design. 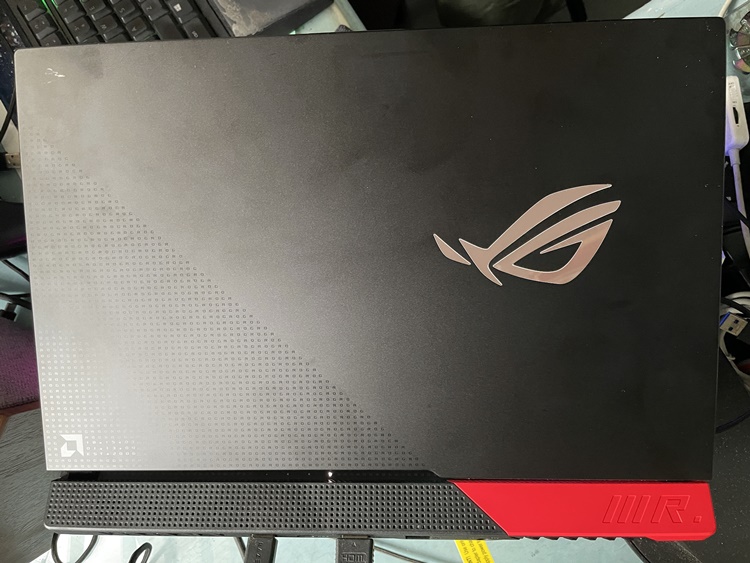 The back cover lid design is quite intricate 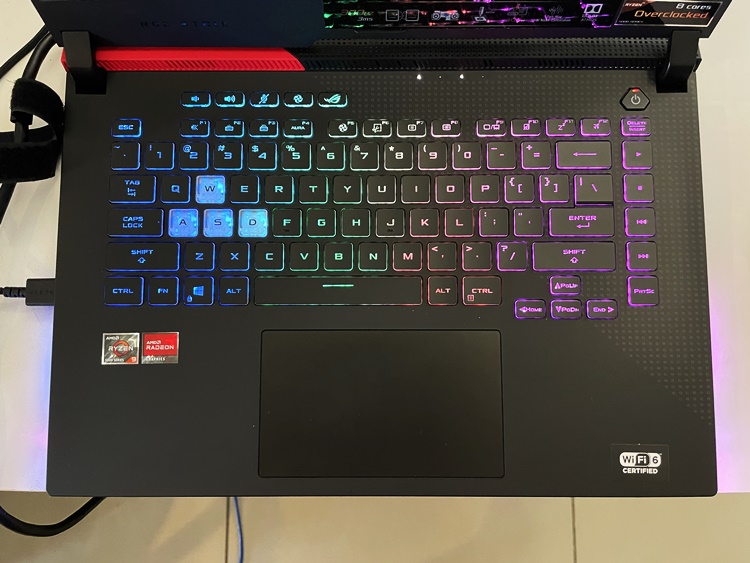 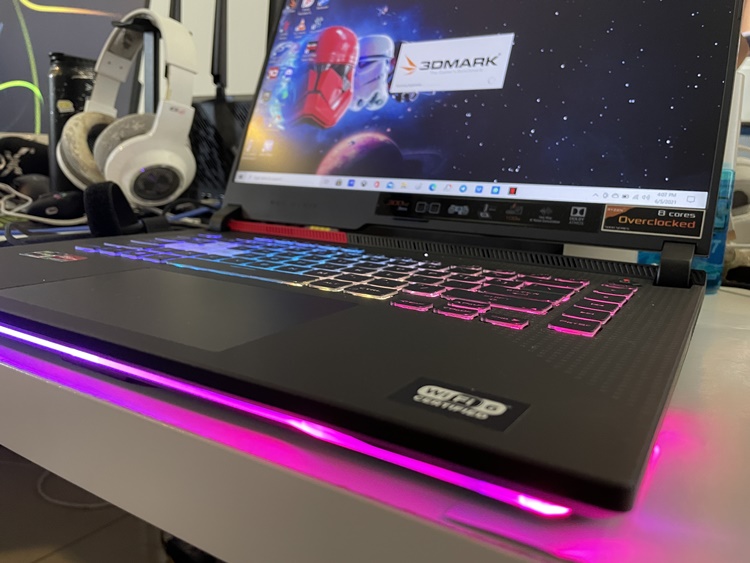 The LED light bar at the bottom certain made a difference 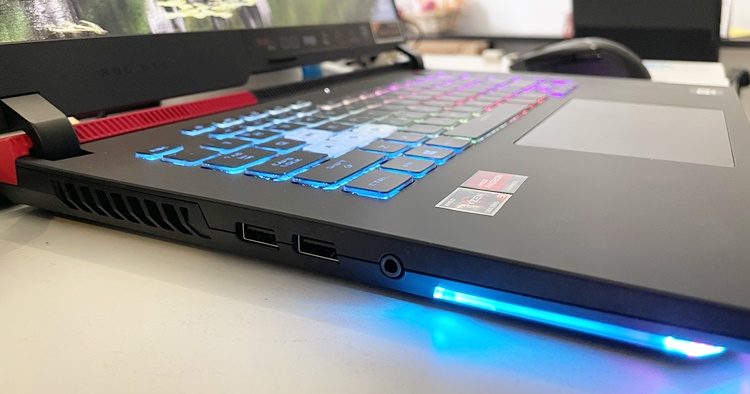 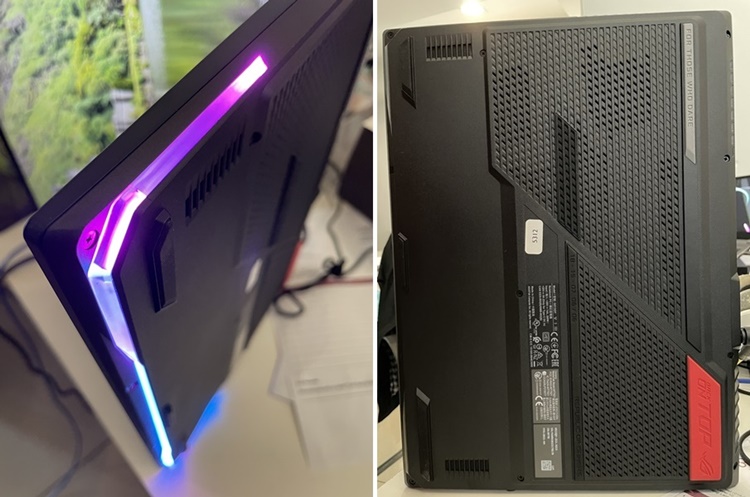 Even the bottom looks nice 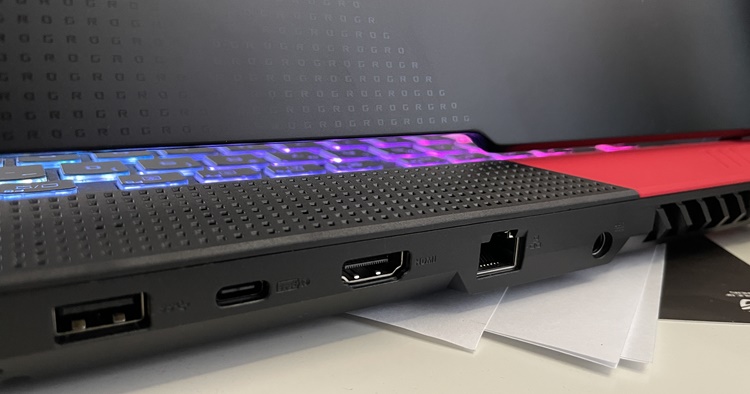 Here are the rest of the ports 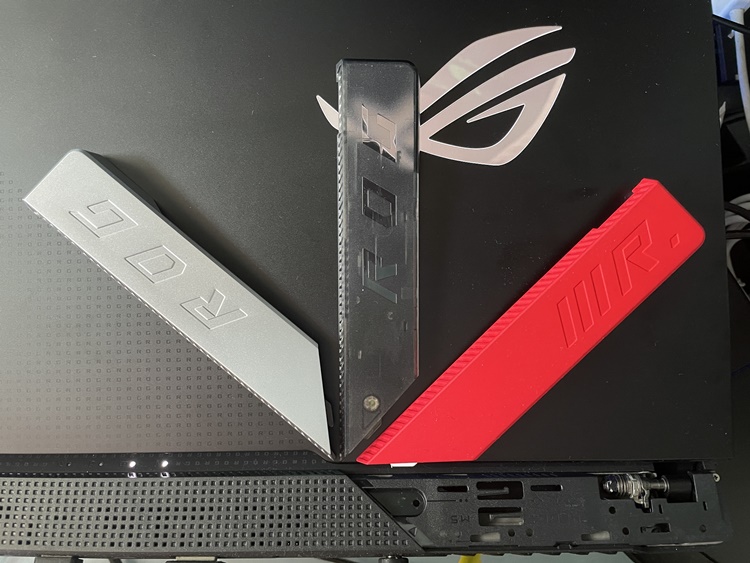 You can interchange the Armour Cap with two other variants

In the design compartment, the ROG Strix G15 Advantage Edition has come quite a long way from the early days of the ROG Strix Scar. In case you didn't know, ROG Strix users can actually change the Armour Cap (depending on model) which is the bright coloured shell that can be detached on the laptop corner. For this Advantage Edition, we were given three options of red, silver and transparent but we all know that red is the coolest and it can even be customizable.

Unfortunately, the cover lid doesn't have the cool LED Anime Matrix but we can live without that. This is because the LED light bar at the bottom is one of the coolest features to have. Previously, I wasn't all that crazy about the RGB lighting bar but this one grew on me. Since I use a laptop stand for my workstation, seeing the RGB lights illuminating the surroundings is pleasant. If you want to change lighting patterns, you may do so at the Armoury Crate. 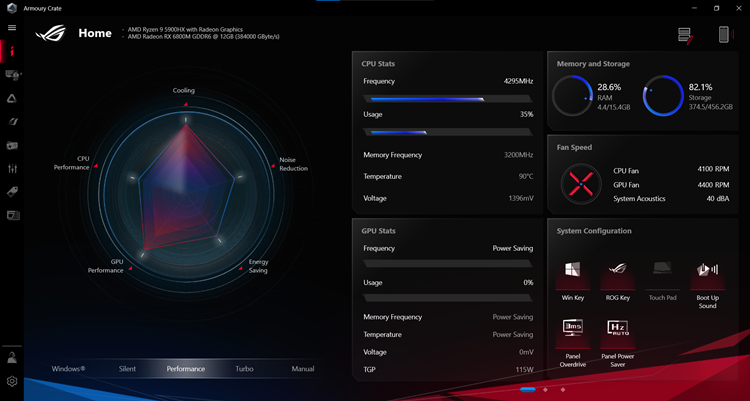 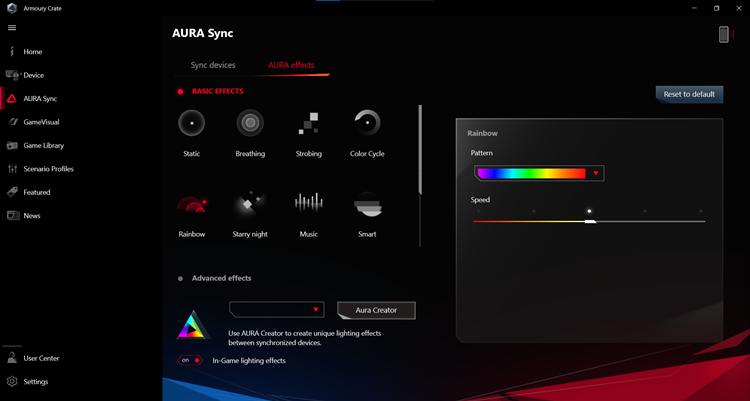 Going into the software, the Armoury Crate is still more or less the same. Like many gaming centre programs, the only reason that you would go into the Armoury Crate is to set the Aura Sync and that's about it. Perhaps I'm just a simple person but I'm just not keen on spending my time customizing the "ideal gaming mood" as I'll be spending more time gaming than staring at the lights. Nonetheless, if you like making gaming profiles with different lighting patterns, go ahead.

Anyway, enough of the aesthetics. It's now time to get into the performance and honestly, AMD is just tearing through the roof. The previous AMD Ryzen 4000 series processors have already set the bar for ultra-performance but the Ryzen 9 5900HX CPU is pushing the boundaries even further. Using a 7nm structure size, this 8-core 16-thread can certainly handle the most demanding work seamlessly including streaming and gaming at the same time.

On top of that, the ROG Strix G15 Advantage Edition is paired with the latest AMD Radeon RX 6800M GPU, further beefing up this already powerful gaming laptop. For your information, this GPU is clocked at 2300MHz 145W and can be boosted up 15% via AMD SmartShift technology. We were also told that the new AMD Smart Access Memory (SAM) also expands the data channel to harness the full potential of GPU memory, utilizing the bandwidth of PCI Express to remove the bottlenecks and increase performance in selected game titles. This result was taken on performance mode 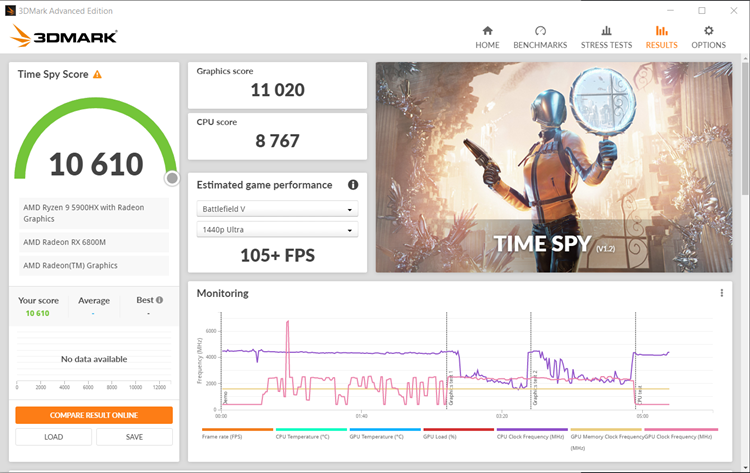 Quite a big jump after turning on Turbo mode! 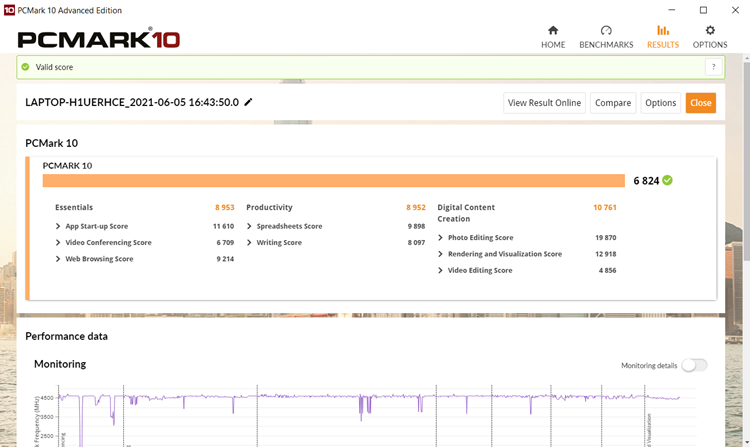 PCMark 10 after turning on Turbo mode

From my gaming experience on the ROG Strix G15 Advantage Edition, it wasn't a surprise for me how ridiculously powerful the CPU and GPU are combined. I have already mentioned that the predecessor performed well so at this point, I was thinking that both ASUS and AMD have pumped in way too many steroids in this laptop. Needless to say, gaming on this laptop is an utter joy, let alone doing your daily work with multiple tabs opened at the same time or editing and rendering your video clips.

The display performance is great too and with the latest AMD hardware inside, you should just boost up the game visual settings to the max. The display is capable of supporting up to 300Hz/3ms speeds but if you prefer high-resolution gameplay, you can just use the default 165Hz refresh rate in QHD. Thanks to the rather thin bezels, watching and streaming your favourite TV series is great stuff too. 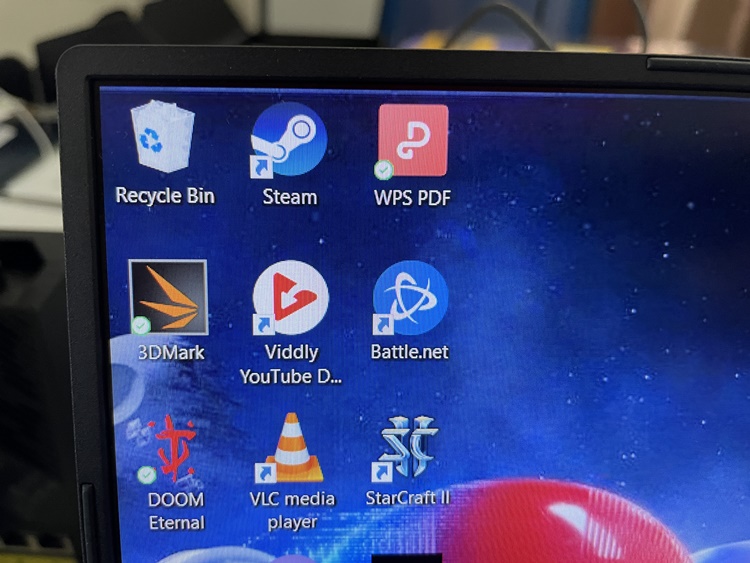 The bezels measure 4.5mm only on the left, right and top Before I forget, the battery performance is better than I expected. When unplugged, I could usually use the laptop for daily work for the whole afternoon easily on multiple occasions. When the battery is nearing depletion, you can use the Fast Charge Technology which can quickly charge from 10% to more than 50% within 30 minutes.

You don't really have to worry about the laptop overheating too even if the game settings are maxed out. If you studied the laptop design earlier, you would notice a pair of vents on both sides and at the back. With the ROG Intelligent Cooling function, the laptop manages the thermal output easily and even the keyboard area won't get too warm (they are calling this the CoolZone). You may also control the fan mode via the dedicated fan button to Silent, Performance or Turbo. 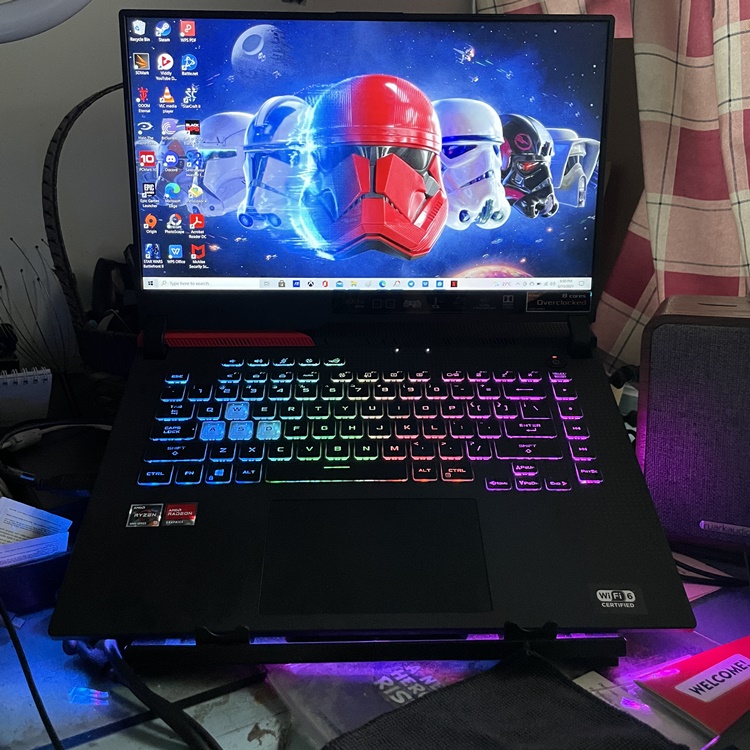 Would ASUS Malaysia import this?

Honestly, there's very little to complain about the ROG Strix G15 Advantage Edition. Everything about the laptop is amazing but if there's one nitpick that I have to choose, it would be that the webcam is missing which is quite essential for the current circumstances. It's also a pity that ASUS Malaysia has no plans (yet) to import the advantage editions to Malaysia so we have no idea of how much the price tag is, making it difficult to do any point of comparison. But one thing is for sure - be prepared to spend a hefty amount of money if you want this bad boy.

Cons: Not available in Malaysia (yet), no webcam and potentially pricey

Conclusion: A gaming laptop for those who love the aesthetics and performance