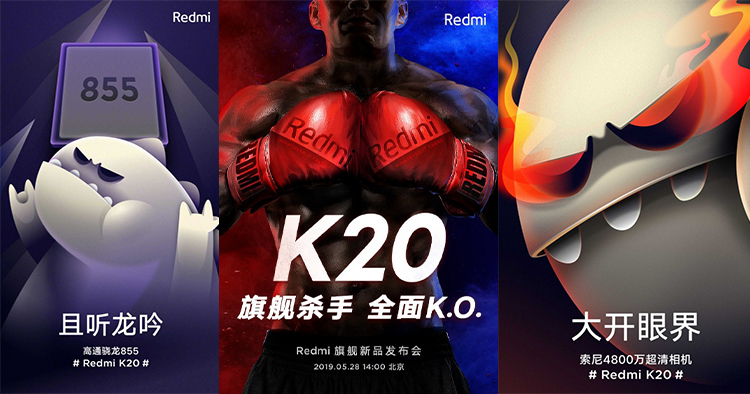 We finally have a date for the Redmi K20! The brand took to Weibo to share out some invitation posters for the device’s launch which will be launched on the 28th of May. The poster also confirms a feature on the device which is the 48MP Sony IMX586 sensor.

Some specs for the Redmi K20 was leaked as well on AnTuTu. The device, dubbed, Demon King, comes with some impressive tech specs and features - all of which make this phone suitable as a flagship killer. The display measures at 6.39 inches with a OLED screen. Under the hood, you’ll find the Snapdragon 855 chipset, UFS 2.1, and under display fingerprint reader and 4000mAh battery capacity with 27W fast charging.

As for its features, it is claimed that the device may launch with a 20MP pop up selfie camera whereas the rear may come with a triple rear camera setup with 48MP + 13MP (ultra-wide) + 8MP (telephoto) sensors. It is also confirmed that the device will be released with 960fps slow-mo recording but it has not been revealed if the sensor will be equipped with optical image stabilization.

The Redmi K20 may be launched alongside the Redmi K20 Pro. Based on pricings, it is possible that this device may be priced lower than the Xiaomi Mi 9 despite its similar specs. So will you be upgrading your device to this flagship killer? Keep up with the latest news and updates on the Redmi K20 on TechNave.com!

Here are the specs of the #RedmiK20 #Redmi #Redmi855 pic.twitter.com/jcIGRY2raW