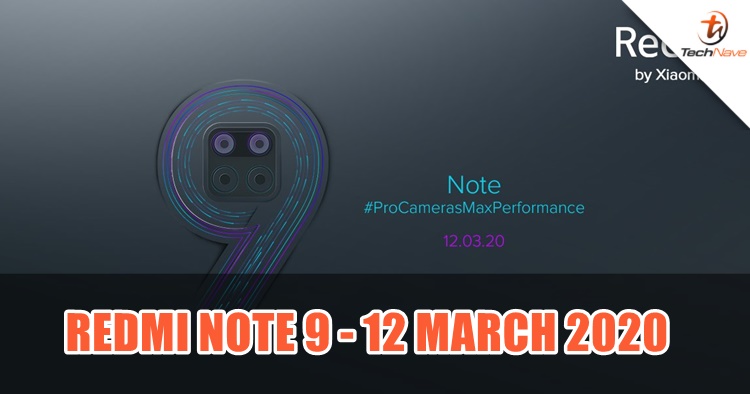 For those who don't know, Redmi has become an independent firm from Xiaomi since last year and they have been doing quite well particularly in India. Just a few hours ago, @RedmiIndia has announced their upcoming smartphone - the Redmi Note 9 - coming soon on 12 March 2020. Marketed with the hashtag #ProCamerasMaxPerformance, here's everything you need to know about it.

With the hashtag #ProCamerasMaxPerformance, the image teaser shows that the phone will have a quad rear camera setup. Information on the tech specs is scarce but tech enthusiast, @ishanagarwal24 shared some tidbits. According to his Twitter post, the Redmi Note 9 will have a glossy design look, a fast-charging technology, and a "beast" processor which is possibly something newer than the Mediatek Helio G90T since the Note 8 Pro is sporting that. Or maybe we will see a Qualcomm Snapdragon 865 chipset to keep up with the gaming capability.

Brace yourselves for the biggest #Redmi product launch of 2020! #ProCamerasMaxPerformance is going to be nothing like you have ever seen before! A new #RedmiNote is coming on 12th March!

Guess what! The Redmi Note 9 Series is launching on 12th March in India! So excited to see all Xiaomi has planned for their best selling series. I'm pretty sure the Redmi Note 9 Pro will turn out be another all-rounder in the 15K Segment. #ProCamerasMaxPerformance #RedmiNote9 pic.twitter.com/nHZfcPR5tq

We are just a few days before the official reveal and Xiaomi Malaysia is very likely to bring in the Redmi Note 9 here as well. Until then, stay tuned for more Redmi news at TechNave.com.