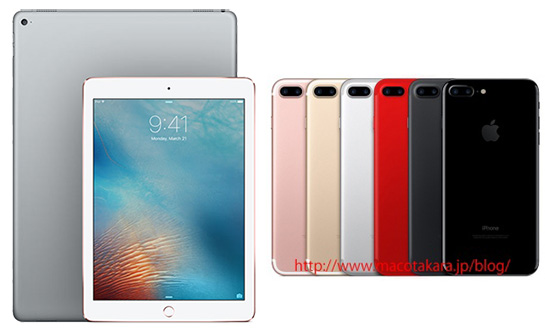 News alert, according to Japanese website Mac Otakara, Apple will have an event showcasing a new iPad Pro line-up and a set of colours for the iPhone SE.

It’s been awhile since we have heard of the iPad Pro, but from the latest leaked source, there’s going to be four new variants based on size display - 7.9-inch, 9.7-inch, 10.5-inch, and a 12.9-inch. That seems a lot for a single tablet, however the 7.9-inch model is said to be a refreshed iPad mini 4, while the existing 9.7-inch and 12.9-inch iPad Pro will come with updated features. With that being said, the 10.5-inch mode, is the only new one with an edge-to-edge display homeless button.

The 10.5-inch iPad Pro is said to feature similar tech-specs with the current 9.7-inch tablet but slimmer, meanwhile, the 12.9-inch model will get a 12MP rear camera and True Tone display, so as the 7.9-inch variant along with a Smart Connector and True Tone flash.

As for the iPhone SE, not only will it come with new colours of Red, but a new 128GB storage capacity option too. Previously, Mac Otakara also speculated that the 10th Anniversary iPhone will also get Red. But do take the news with a grain of salt, as they are not 100% accurate most of the time.