Rumours roundup: Everything we know about the Samsung Galaxy Note20 series so far 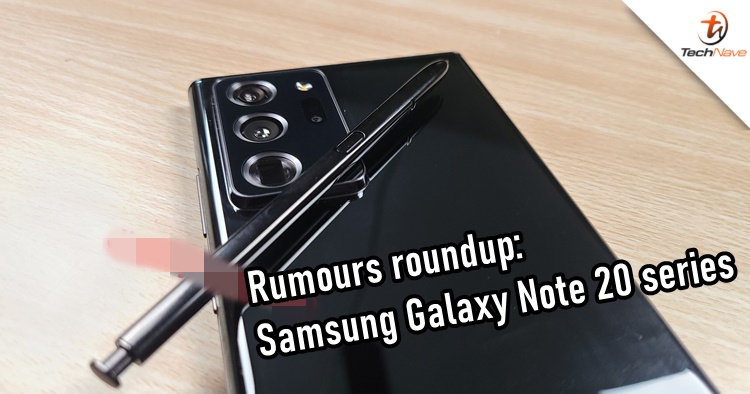 It's been a while since we made a rumours roundup news but in case you missed it, the Samsung Galaxy Note20 series will be officially unveiled on 5 August 2020 and it will be a livestream event. Along the past few weeks, we have read many rumours here and there so with that, we have decided to compile all of them together. Here's the roundup of all the rumours about the Samsung Galaxy Note20 series.

Thanks to leaksters like @jimmyispromo and @UniverseIce, the most featured phone is none other than the Samsung Galaxy Note20 Ultra. At first glance, the flagship design didn't stray far from the Galaxy S20 series as the thick camera module is positioned at the back. Compared with the predecessor, the S Pen slot and speaker switched from the right to the left (when facing the display) and it seems that the S Pen can go into either one seamlessly.

According to the leaked Note20 Ultra, I made a Note20 Ultra rendering. (Ignore some details, but bezel is real) pic.twitter.com/LRDYbUm5Ty

Jimmy also claimed that the Galaxy Note20 Ultra's camera bump is bigger than the S20 Ultra, even though it looks the same to us but we shall see when the time comes. Also, both Jimmy and our little anonymous bird are claiming that there would be only two variants - the vanilla Galaxy Note20 and the ultra variant which we just mentioned.

Next, rumours suggest that the S Pen would be getting some new upgrades. According to our trusted source, he said that the S Pen on the Galaxy Note20 series is getting more functions than before which is good for presentations and shortcuts. We think that this description matches Jimmy's discovery of finding out the stylus can function as a "pointer", from his photo, users can select different colours and icons for this.

S Pen can now act as a Pointer. Select your color and select icons on the screen, navigate around. Also can highlight an area. #Note20 #GalaxyNote20Ultra

Besides that, we expect the S Pen's pressure sensitivity to be enhanced as well. Our trusted source gave us a tip that the stylus now lets the user draw and take down notes easier as if it's a real pen/pencil. Should this be true, this is good news for Galaxy Note fans who use the stylus often.

Now for the internal tech specs, many speculations point that the Galaxy Note20 series should be carrying a Snapdragon 865 chipset but for our local market, we are probably getting the Exynos 990 chipset. Another interesting one is that the camera's digital zoom could only reach 50x instead of 100x. It may sound like a downgrade but if the 50x digital zoom quality is better, then we have no problem with it. On top of that, the Galaxy Note20 series should be sporting up to 16GB of RAM, 512GB storage, a 4500mAh battery, and a 6.9-inch Super AMOLED QHD+ display with a 120Hz refresh rate. Oh yeah, the main camera should also use a 108MP ISOCELL image sensor.

So these are what we know about the upcoming Samsung Galaxy Note20 series so far, however, since most of these are still rumours, do take them with a grain of salt. But what do you think? Are you excited about it? You can get yourself registered and get first-hand information about the next Galaxy Unpacked livestream here at 10PM. Let us know in the comments below and stay tuned for more trending tech news at TechNave.com.