Current Location: Home > Reviews > Samsung Galaxy A52s 5G review - The much improved Galaxy A52 variant that we've been waiting for Fast forward to a few months later, Samsung introduced the Galaxy A52s 5G with an upgraded mid-range tier chipset. But is it worth upgrading to this new variant? Check out our review of the Samsung Galaxy A52s 5G below to find out more!

At first glance, anyone can guess that the Galaxy A52s 5G is a mid-range device, even if the person doesn't know anything about smartphones. This phone's body is made out of plastic without any special finishing. If you compare it to the Galaxy A50, the design pales in comparison. Despite the plastic build, the aluminium frame around it allows for a firm grip The camera bump on top is surprisingly not that protruding. Meanwhile, it's nice to see an audio jack and USB C at the bottom 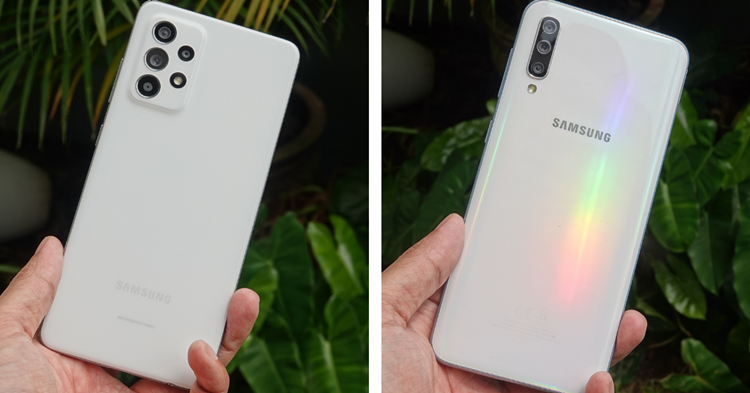 Comparison between the Galaxy A52s 5G (left) and Galaxy A50 (right)

Of course, the good thing about using plastic material is that it won't attract any fingerprint stains. But it would probably disappoint some Samsung fans who are used to the sparkling "glasstic" Galaxy A50 or A51 before. Of course, having a plastic body doesn't mean that the Galaxy A52s has poor built quality. On the contrary, it has a solid build quality thanks to the aluminium frame around it.

Another attractive feature of the Galaxy A52s 5G is the four colour options - white, violet, mint, and black. Admittedly, we thought the white model (that we received) would look uninteresting. But it turned out to be pretty neat. Unfortunately, Samsung doesn't include a protective casing in the box, so you have to buy it separately.

Tech specs and features - More advanced than the Galaxy A52

As we mentioned earlier, the Snapdragon 778G is a relatively new mid-range tier chipset with a 6nm process. Alongside the Super AMOLED display, the Galaxy A52s delivers beautiful visuals. Moreover, you get to enjoy a high refresh rate of 120Hz, an excellent improvement over the standard variant. Although there's no adaptive refresh rate, you can still choose between 60Hz or 120Hz. 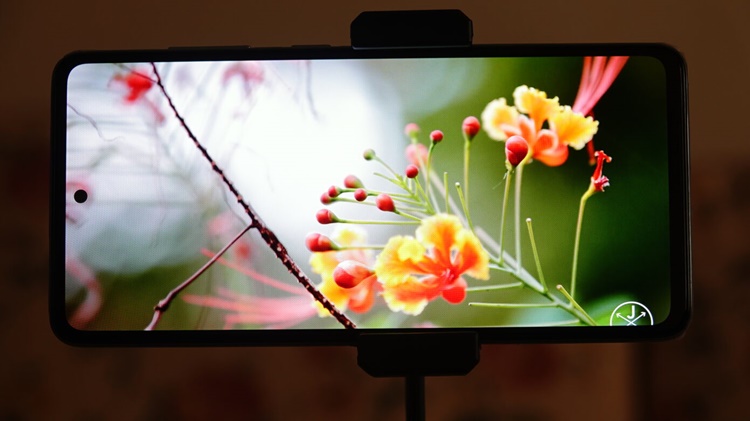 Another sweet improvement is the Dolby Atmos dual stereo speaker. If you like to binge-watch Netflix or play mobile games a lot, the sound quality is superb. You can also customise the sound with the equaliser, or toggle the Dolby Atmos mode when gaming. Note that the second feature is uncommon for a mid-range phone too.

In terms of software, the Galaxy A52s 5G comes with an OneUI 3.1 operating software based on Android 11, which is super user-friendly. You probably won't have much trouble navigating around this UI. Unfortunately, it comes with several bloatware apps like Shopee, Lazada and Candy Crush, which can't be removed for some reason. Well, at least Samsung promised to provide three years of major software and security updates for four years. In theory, this means the Galaxy A52s can reach Android 14. 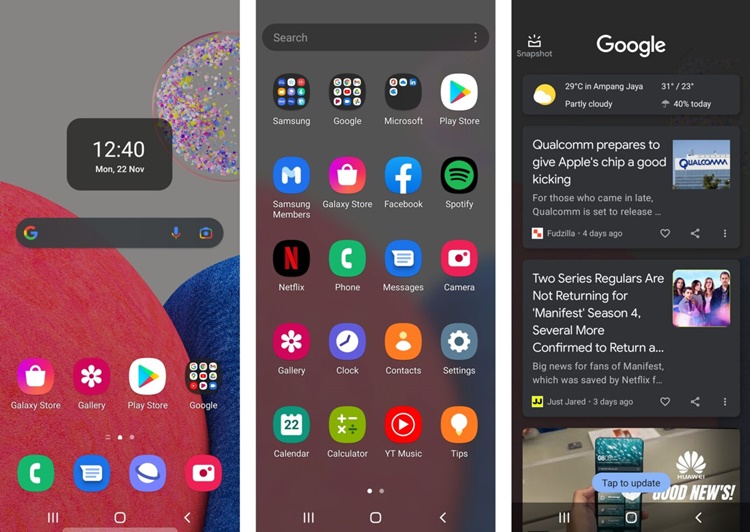 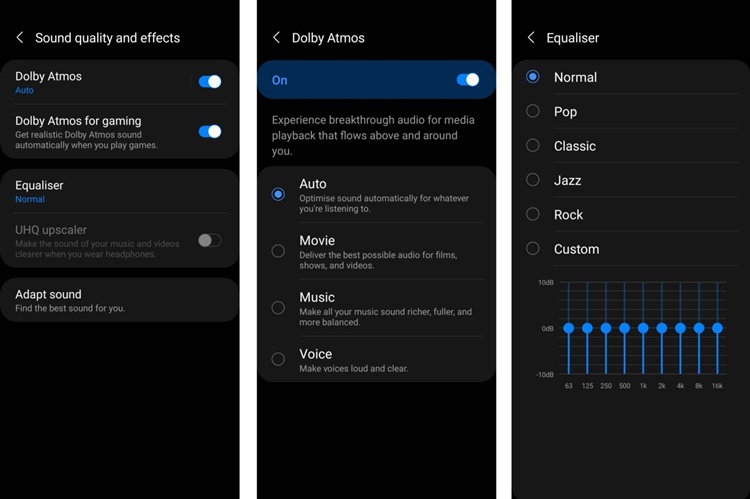 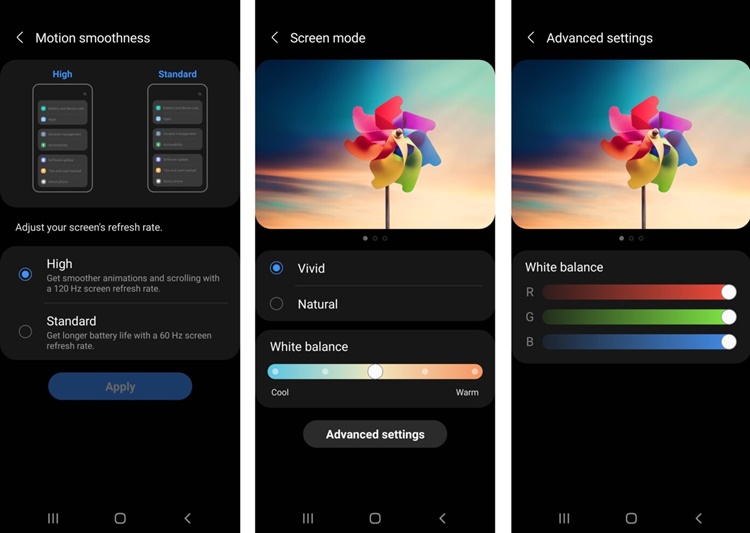 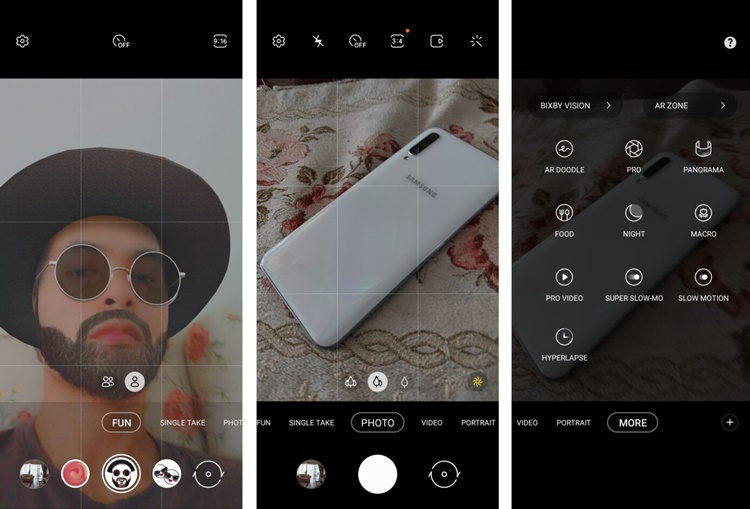 In addition, there are a few borrowed camera features from the Galaxy flagship series. This includes Single Take and Fun mode offering various filters. Of course, there are also Portrait mode, Night mode, panorama, macro, and many more. The Galaxy A52s 5G can also record in 4K at 30FPS.

As you might expect from the Snapdragon 778G chipset, it has good performance for everyday tasks and can comfortably run several apps simultaneously. While it doesn't have the now commonly seen virtual RAM feature, it's not really missing out here. 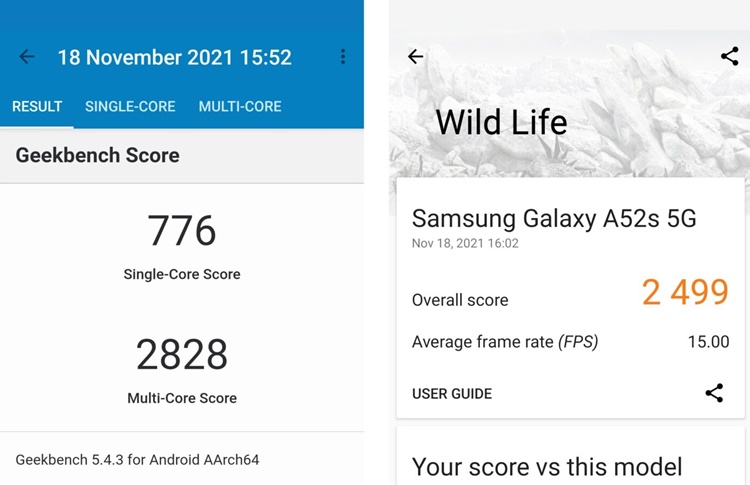 For a mid-range device, the scores are satisfactory

You can turn the Asphalt 9 graphics to the maximum, but the frame rates will be affected

This is the highest you can go

As for the battery performance, the Galaxy A52s 5G's 4500mAh battery can easily last a day, even if you enable the 120Hz refresh rate. If you want to save more battery, you can switch to 60Hz with Power Saving mode enabled, allowing the phone to last up to two days. The phone supports 25W fast charging, but you only get a 15W charger (weird, I know). But if you have a 25W charger, it should take an hour to fully charge the phone.

Finally, let's talk about the camera performance of the Galaxy A52s 5G. To cut a long story short, photos taken on the device were satisfactory, showing good dynamic range. If you want higher quality photos, you can turn on the 64MP mode. The night mode can be used on the 8MP ultrawide lens as well. You can check out these photoshoots below by yourself. 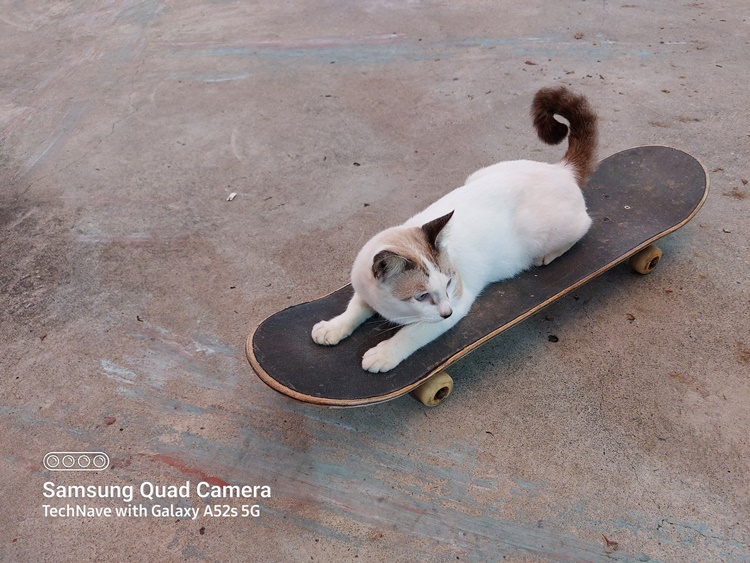 A normal shot of a cat on a skateboard 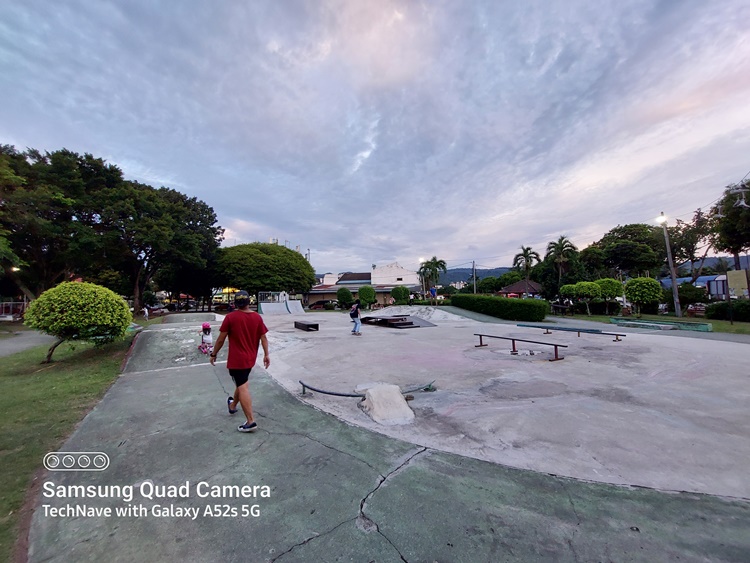 Ultrawide mode still looks quite good and not distorted 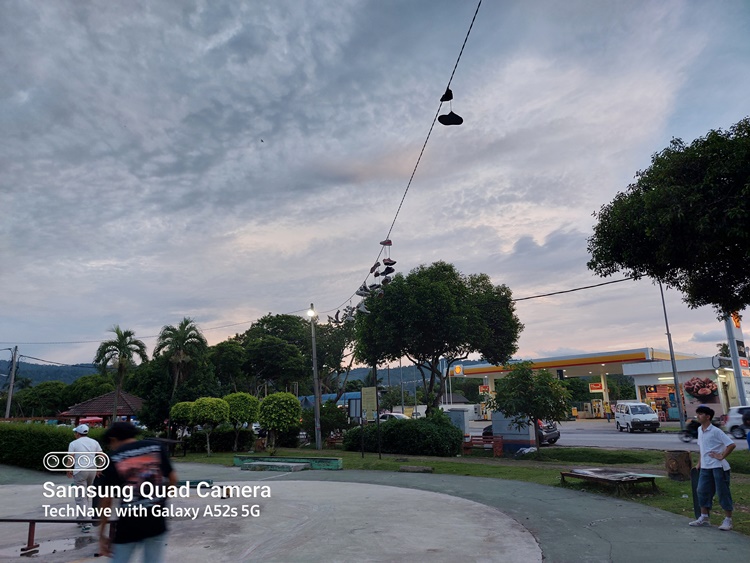 Another normal shot before zooming 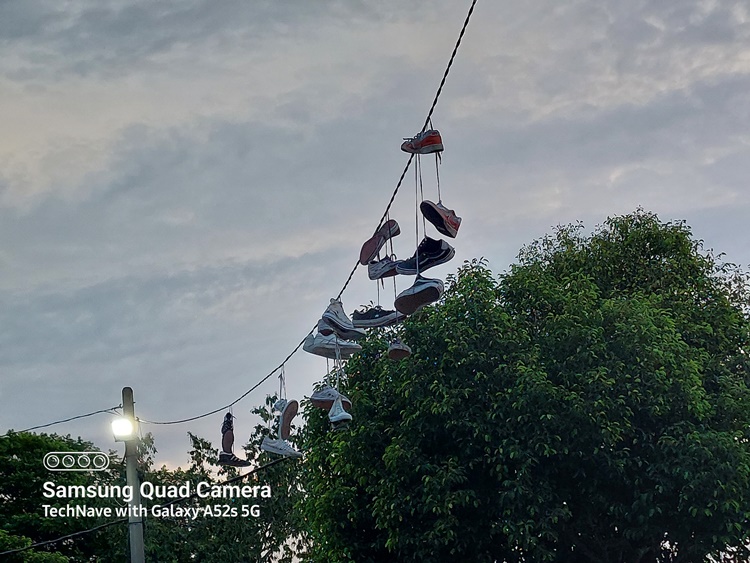 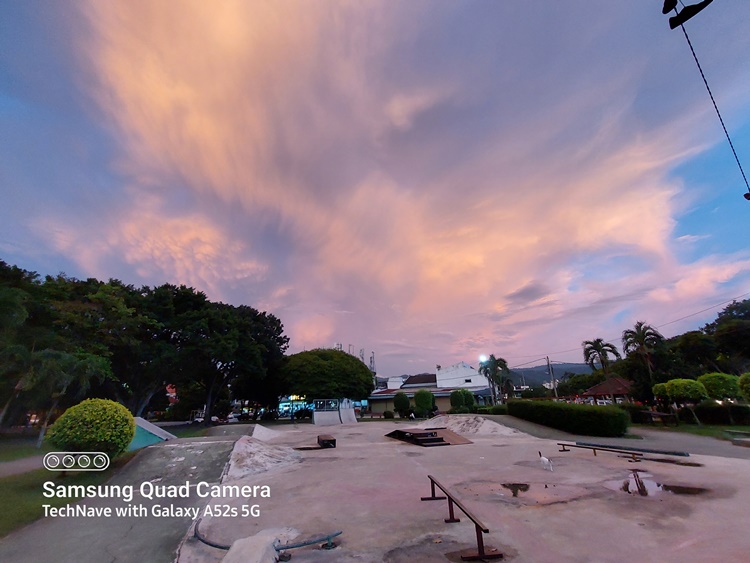 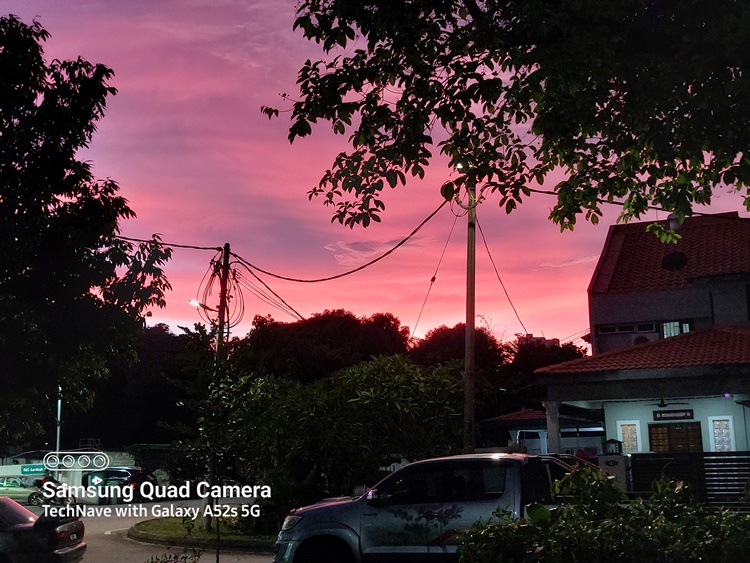 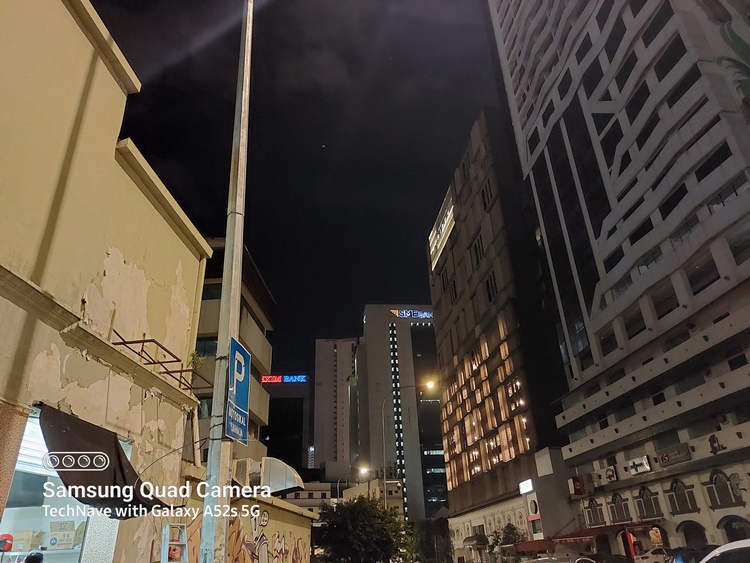 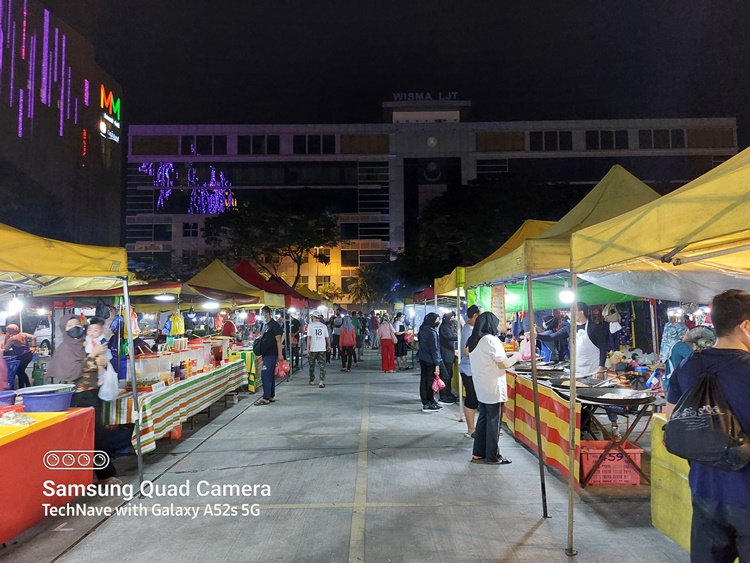 The noises in the background are tolerable 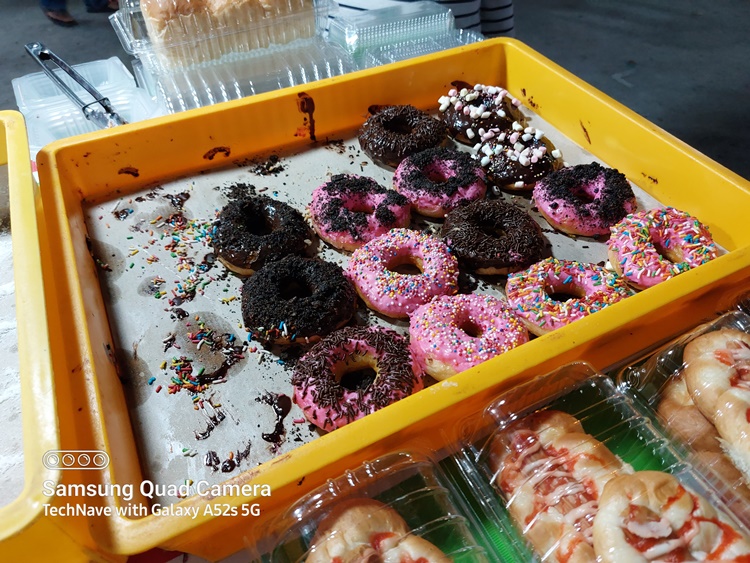 As long as there is enough lighting, your photos can't go wrong

Conclusion – More worth it than the Galaxy A52

From our experience, the Galaxy A52s 5G should work like a charm for most consumers, especially casual ones. It performs well in many areas, but perhaps the biggest win is its 4-year software update guarantee, which is pretty long compared with other brands. Moreover, the Galaxy A52s 5G offers better and faster performance Galaxy A52 5G.

Since both phones are sold for RM1899, we would certainly recommend the Galaxy A52s 5G because of the Snapdragon 778G chipset. But if you're a bit tight on budget, you could consider the OPPO Reno6 Z (RM1699), Xiaomi 11T (RM1699), or the realme GT Neo2 (RM1999). The Reno6 Z offers a more captivating design, while the other two phones have faster chipsets. But what do you think? Do you agree with our review? Let us know in the comments below, and stay tuned for more tech gadget deals at TechNave.com.