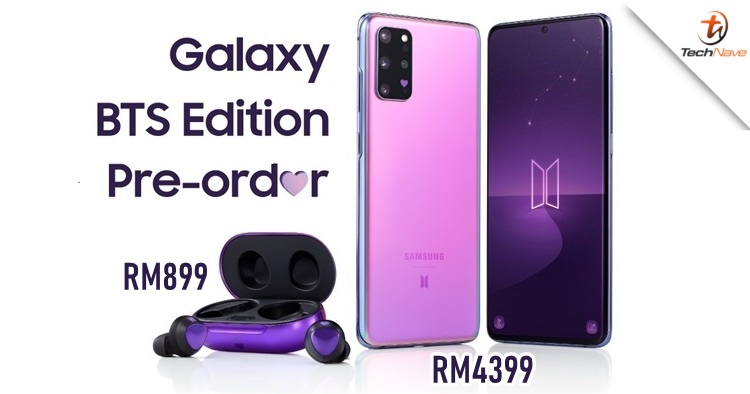 It was only yesterday that Samsung Electronics officially revealed the new Galaxy S20+ and Galaxy Buds+ BTS Limited Edition. At first, the pre-order was only made available in the US but to our surprise, the BTS Army in Malaysia will also get their chance to pre-order which will start from 19th of June until 5th of July 2020. The phone will cost RM4399 as predicted, whereas the special earbuds will be RM899.

That's not all, the pre-order benefit from the US will also be similar to the Malaysia market. According to Samsung Malaysia, pre-ordering the Galaxy S20+ BTS Limited Edition will grant the consumer half the price of the Galaxy Buds+ Edition at only RM449.50. On top of that, those who only plan to pre-order the latter will receive a complimentary Wireless Charger Pad BTS Edition (worth RM199).

Since the special edition phone is coming to Malaysia sooner than expected, that also means we are very likely to get the Exynos 990 chipset variant. The rest of the tech specs remains the same, including the 8GB + 128GB memory capacity, 6.7-inch Dynamic AMOLED 2X display, the 64MP quad rear camera, and the 4500mAh battery. Of course, the BTS Army will get a treat with a BTS-themed user interface, decorative stickers and photo cards of the K-Pop ground.

The pre-order website will go live on 19 June 2020 and you can bookmark the page right now if you're planning to get it. What do you think of the design? Let us know in the comments below and stay tuned for more local tech news at TechNave.com.