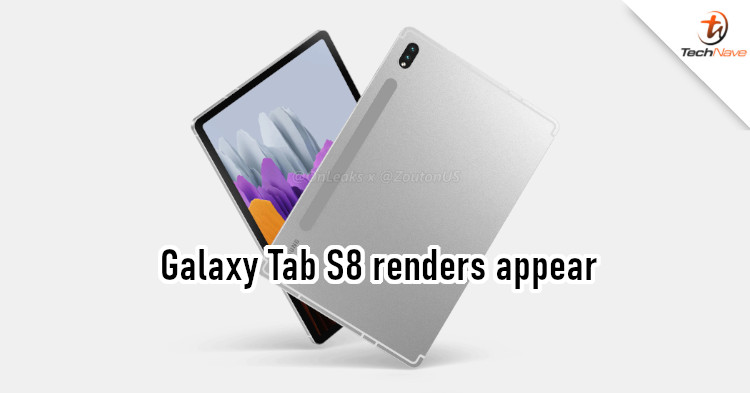 It's kind of incredible if you think about it, but rumours of the Samsung Galaxy Tab S8 started as early as January 2021. At the time, it was suggested that the tablet would use a Snapdragon 888 chipset. Well, the launch might finally happen soon as new details are out.

@OnLeaks (via Zouton) has released some renders of the Samsung Galaxy Tab S8. As you can see, the new tablet has moderate-sized bezels on the front for a decent screen-to-body ratio. Then at the back, it has a dual camera with an LED flash and a long speaker bar. It also seems to have extensive antenna lines on the top and bottom, so we can expect a non-WiFi variant.

As mentioned, the Galaxy Tab S8 should come with the Snapdragon 888 chipset. It should also have 8GB of RAM, 128GB of internal storage, and an 8000mAh battery. In our opinion, there's also a chance that Samsung would opt for the Snapdragon 898 chipset since it's almost 2022. For cameras, the rear camera is expected to be a 13MP and 5MP sensor while the front would have an 8MP sensor.

What do you think of the renders and tech specs? Is this what you're expecting from the latest Galaxy Tab S series? Let us know in the comments, and stay tuned to TechNave for more news like this.