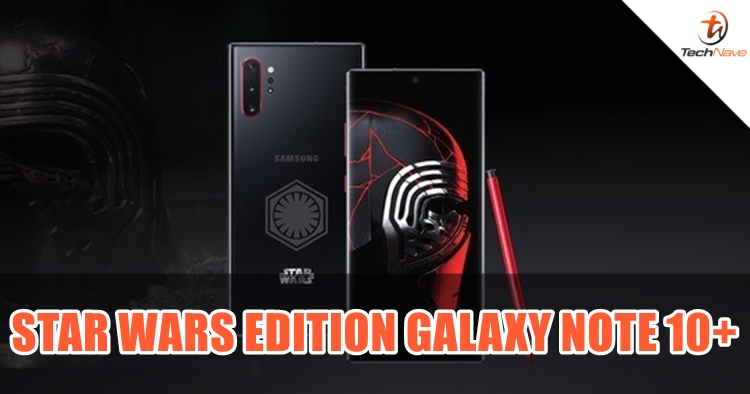 Samsung just rolled out a Star Wars edition Samsung Galaxy Note10+ to mark the release of The Rise of Skywalker which will be available in theaters from 19 December. The device has chosen to join the ‘dark side’ and the sleekly-designed smartphone really got our hearts. Let’s check out how the device looks like!

The special edition Galaxy Note10+ assembles the vibe of Kylo Ren, who first appeared in The Force Awakens as Han Solo and Leia Organa’s son. The dark-themed device sports a black-and-red colour scheme and it also comes with a lightsaber-like red S Pen. In the box, a pair of Galaxy Buds, a Ren-themed leather case, and a Ren-themed metal badge will be included as well. The Galaxy Buds comes with a cool red inner casing that you can show off with style. Samsung has also added Star Wars exclusive themes into the phones that include wallpapers, icon packs, and ringtones.

This special edition Note 10+ will be sold in 15 markets that include the UK, France, Germany, Russia, Hong Kong, and Spain starting from 10 December 2019. For the US, it will be released on 13 December as an unlocked version selling at the price of 1299.99 USD (~RM5410.60) at Amazon. However, there is no news whether it will be hitting the Malaysian market yet.

May the force be with you for those who are planning to get this device! For more tech news, stay tuned on TechNave.com!