Current Location: Home > News > Samsung's next budget smartphone could be the Galaxy A01 Core equipped with 1GB RAM and 720p display 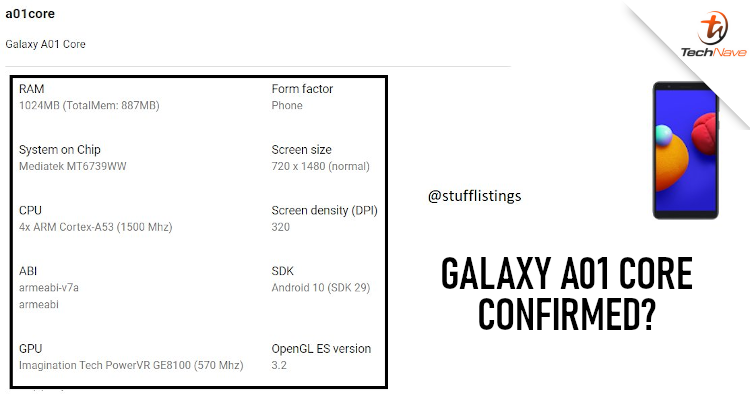 Based on a statement by @stufflistings on the user’s Twitter account, it seems that Samsung’s upcoming budget smartphone could be called the Galaxy A01 Core, and it is expected to come equipped with an MT6739 chipset, 1GB of RAM and 720p display. In addition to that, the device will also sport Bluetooth 5.0 and Android 10 support.

While not much is known in regards to the design, we do know that it will most likely come with a rear-mounted fingerprint sensor, bezels that are not too thin or too thick, as well as a tall display. With all that said, do take some of the information provided with a grain of salt, due to the fact that Samsung has yet to provide an official statement on the leaks.

Not only that, but there are no news on the Malaysia release date, exact tech specs, and local pricing for now. Would you be interested in getting the Samsung Galaxy A01 Core as soon as it is available in Malaysia? Let us know on our Facebook page and for more updates like this, stay tuned to TechNave.com.