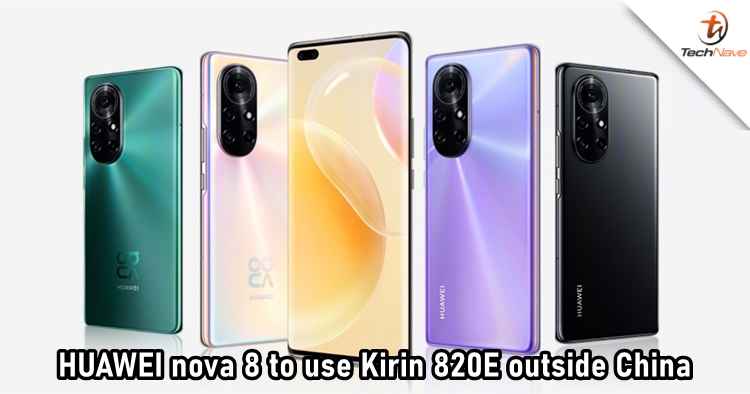 The HUAWEI nova 8 announced back in December 2020 has finally appeared in another country outside of China. However, it looks like the global variant might have one of its tech specs changed. Instead of a Kirin 985 chipset, the nova 8 for Russia relies on the Kirin 820E for performance.

Both two of the mentioned chipsets are based on the 7nm process. The Kirin 820E has six cores with three Cortex-A76 at 2.22 GHz and three Cortex-A55 at 1.84 GHz. For GPU, it uses the Mali-G57. Besides the chipset, it is said that all the other tech specs remain the same as the Chinese variant of nova 8.

To recap, the nova 8 sports a 6.57-inch OLED display with Full HD+ resolution and an under-display fingerprint scanner. Under the hood, it packs a 3,800mAh that supports a 66W wired fast charge. For photography, there's a quad-camera setup with a 64MP main camera, an 8MP ultrawide unit and a couple of 2MP shooters for depth and macro. On the front, it has a 32MP selfie camera housed in a single punch hole.

Do you want the nova 8 to come to Malaysia? Let us know on our Facebook page and stay tuned to TechNave.com for more smartphone updates.