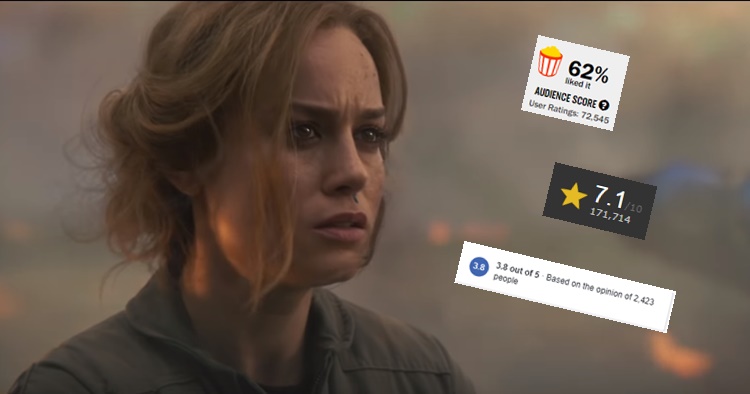 By now, most of you have already watched the latest Marvel Studios movie - Captain Marvel. Some loved it, some hated it, but personally for me (any many others), I find the movie just fine. It's not so bad, but nothing so great either. So in this article, we will look into the top 5 reasons why you probably didn't like Captain Marvel very much.

Also, before we get started - you are about to enter spoiler territory. So turn back now if you haven't watched it.

This is probably one of the main reasons for a lot of hate from fans and moviegoers. Some argue that maybe Brie Larson, the actress of the main character, Carol Danvers is the wrong casting choice but I don't think that's really the case, as it has to do more with the character development and script writing. Sure, Carol is already strong from the beginning shooting out plasma energy from her fists but that's not the point - there are other plenty of strong characters from the start as well (Superman, Alita, Jason Bourne).

This is her face expression almost throughout the movie

She was also pretty emotionless most of the time until she found out the truth but even until then, I still didn't really care that much about her and I think this is due to the fact that her life was not in any sort of danger to make us care enough. Not to say that she was flat the entire time, she was pretty snarky with her mentor and towards the Skrull which was okay, but just... rather poorly developed as a relatable human being and definitely not enough backstory.

Of course, making a movie of a character gradually finding out about his or her past is rather tricky. But in Alita: Battle Angel and the Bourne Identity series, not only did we see the characters' personalities through flashbacks but through their actions as well even in non-action scenes as we progress. In Carol's case, we were given a quick treat of her flashbacks, an audio playback and her close friend which was heartwarmingly forced about who she is.

Nothing was at stake

That said, there was nothing at stake. Supposedly, we were told that the Skrulls were invading planets and the Kree was supposed to stop them. Then, it took a turn on finding Dr Marvell before the Skrulls do... then suddenly turns out that she was already dead and now it's a mission to find out who Carol was. Come to think about it, there wasn't any focus nor any of the character's motivation shown. They were just... doing their jobs.

Maybe the warhead missiles that were aimed at Earth was an emergency, but there was no sense of urgency because we already know "CAPTAIN MARVEL GOT THIS" and she did marvellously. But... yeah, what was at stake again?

From the words of Mark Hamill, "They say a hero is only as good as his villain and I believe the reverse is also true". But in Captain Marvel's case, there's nobody equal to her and... who exactly is the villain? Definitely not the Skrulls. Is it Yon-Rogg? The Kree?

To be fair, this is a common issue for the MCU but at this point of entering Phase 4 and AVENGERS: ENDGAME, I think most of us expected better. It was a missed opportunity to utilize the Skrulls ability to cause more tension on who to trust but nope, I guess we don't have time for that on a self-discovery mission. But perhaps another way of looking at this is how big organizations or a superior race like the Kree abusing their power, which reflects the current world. *coughthegovernmentcough* 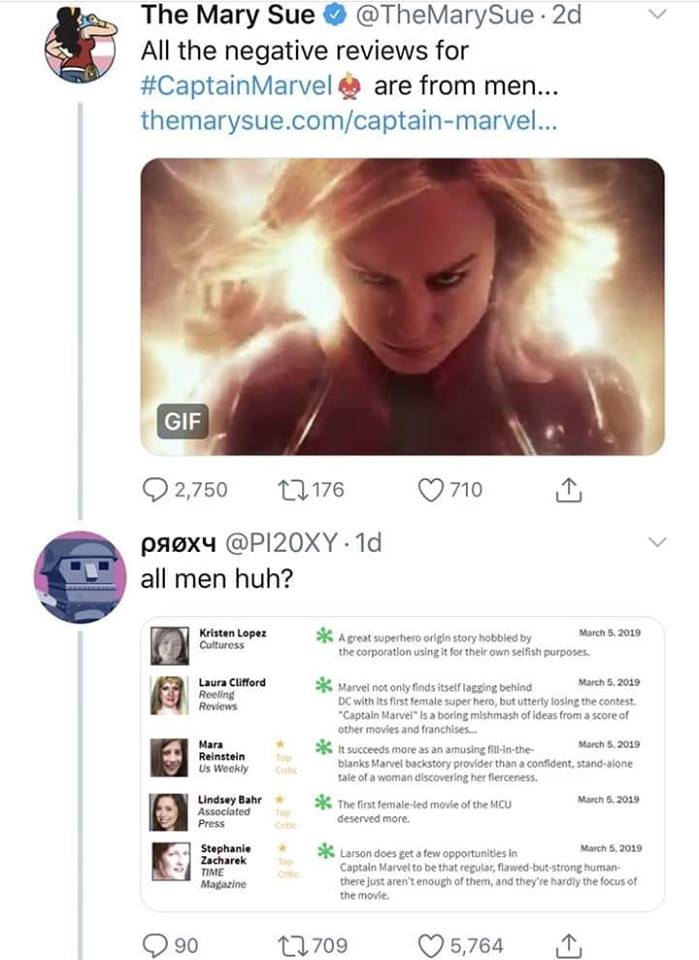 It's no secret that the directors of the movie, Anna Boden and Ryan Fleck, have openly said that Captain Marvel is a feminist (and humanist, lol) movie. Like a fly on a wall, it's too obvious throughout the movie and combining from the misunderstanding of Brie Larson's so-called white men trash talk, the movie has certainly garnered a lot of controversy and attention for the wrong reasons.

Listen, I'm all for female empowerment. I love Sarah Connor from Terminator 2, Ellen Ripley from Aliens, the Bride from Kill Bill, Alita and many others. I can see the message that the writers are trying to convey but they didn't have to shove it in front of our faces by belittling men. To add on to that, I've also spoken to a few female friends of mine most of them felt the movie was just fine, didn't see what was the big deal, or (to my surprise), wished Captain Marvel was a dude instead. You really have to take my word for it.

Bottom line - Regardless of whether if it's a male, female, black, white, yellow, brown, or an Apache helicopter. We just want a good movie, mmkay?

No film style of its own 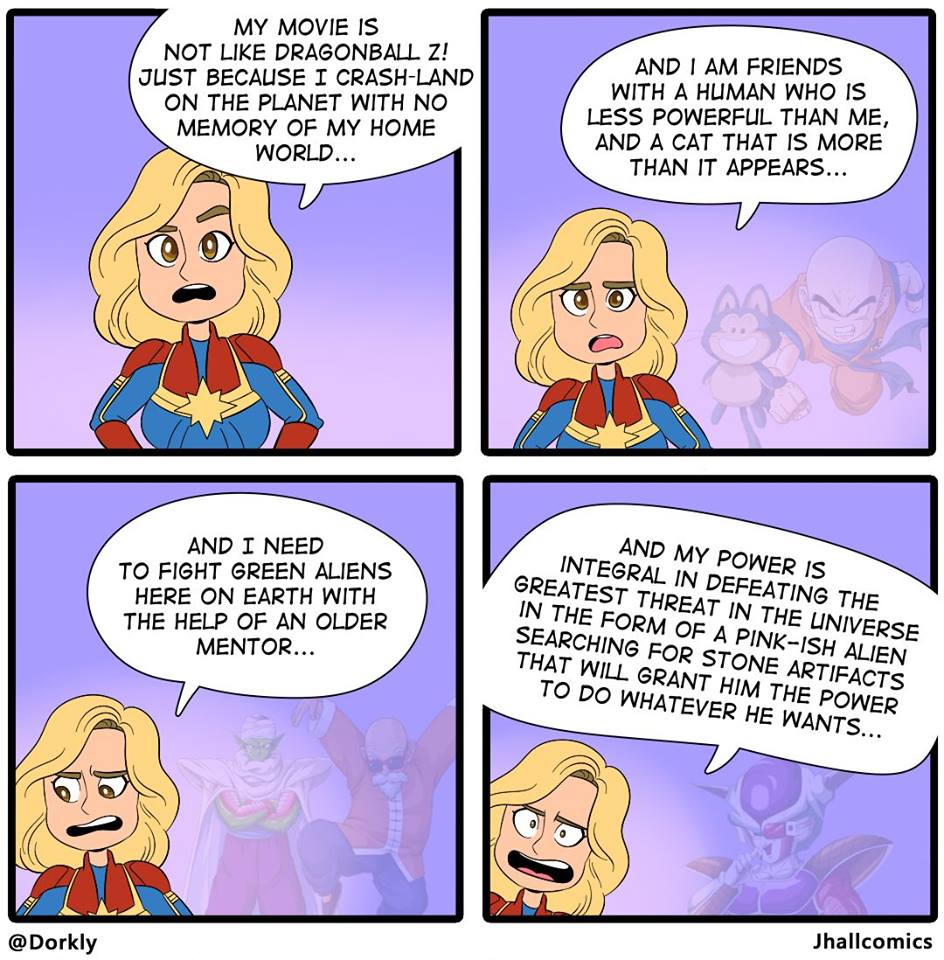 Ok, hear me out. This one is probably for the movie enthusiasts (me) but when you look at other MCU movies, the Russo Brothers made Captain America 2 like a political thriller film (#sogood) and even somehow made the third sequel and Avengers: Infinity War different. You can also see what James Gunn did with Guardians of the Galaxy with that sci-fi adventure that has never been done in the MCU before its debut. Ant-Man, although a filler in between the series, is certainly a hilarious superhero movie in its own right. The Spider-Man: Homecoming fits the bill of a high-school kid movie. Heck, even Wonder Woman derived from the dark and gritty feel from Zack Snyder's DCEU vision was well done indeed.

So what I'm saying is that the Captain Marvel movie doesn't seem to have its own identity. It's like a mash-up of many genres together, like the fish out of the water moment when Carol returned to Earth (like Thor), the 90's feel (which also made it feel like when the T-800 travelled back in time in Terminator 2), a buddy cop movie with Fury, even that Guardians of the Galaxy feel playing that 90's song during a fight scene. Perhaps this has something to do with the fact that there are two (2) directors for this movie as mentioned earlier. 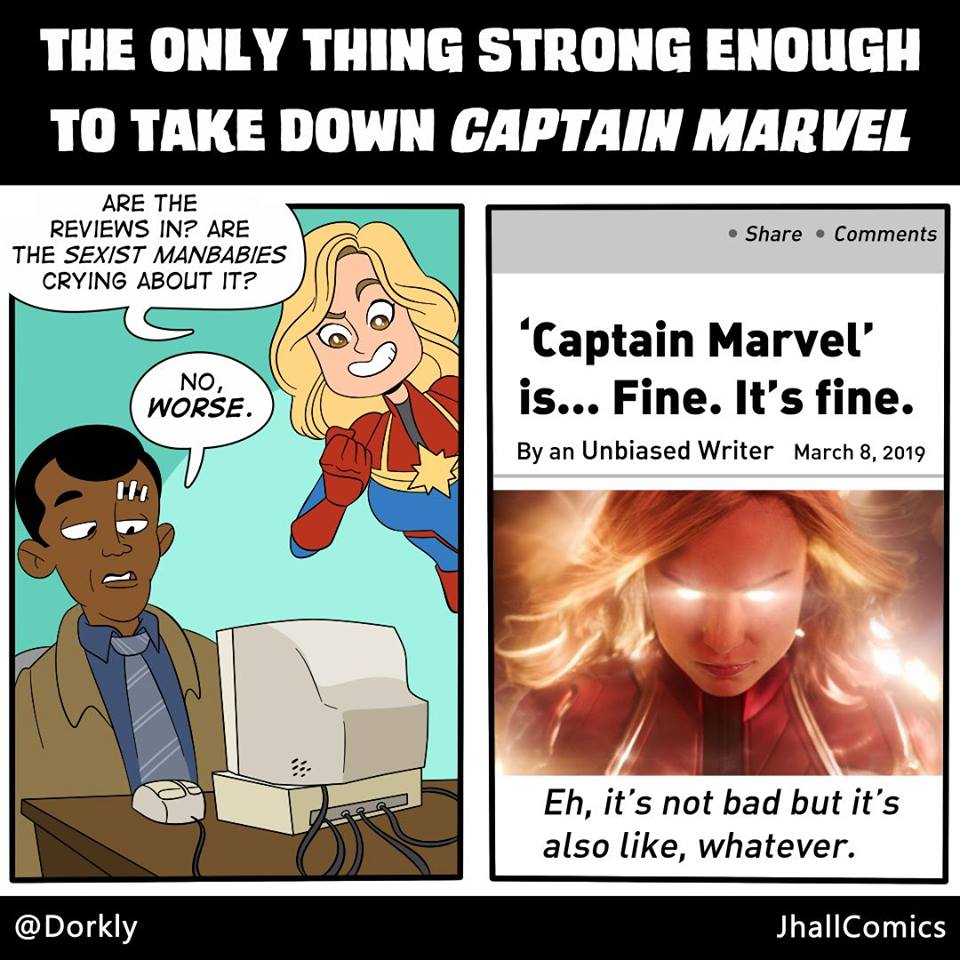 So there you have it, do you agree with our points? If you enjoyed the movie, then good for you! Hopefully, her character will be much improved in one of the most anticipated movies this year - Avengers: Endgame and we can't wait to check it out!

Want more movie analysis from us? Give us a like and stay tuned for more of that at TechNave.com.