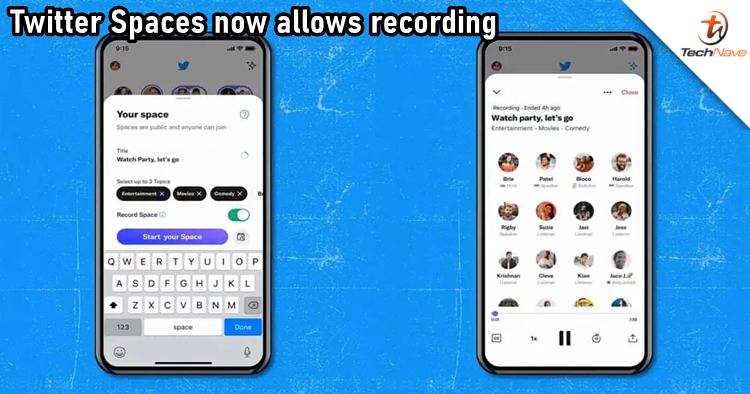 Twitter Spaces is getting more popular as the company does put effort into improving the feature on the social media platform. If you are not familiar with it, it's something Clubhouse-inspired by allowing the users to have a voice-based chat room to talk about stuff. From now on, users will also be able to record and share Spaces that they have created, so anyone who missed out on the live broadcasts can still listen to them.

Users who created a Space can now find a "Record Space" toggle. After turning it on, the live broadcast will be recorded, and all the participants will get notified of it. The recorded Space will then appear on the user's profile page and remain available for playback for 30 days. It is also possible for the user to delete it before it expires.

Another update on Spaces Recording:

The option for hosts to record is now available for everyone on Android and iOS! When starting a Space, tap the “Record Space” switch to have it available for public playback for 30 days once the Space has ended. pic.twitter.com/fYzaOjQJlF

However, it's worth mentioning that all the magic only happens on the mobile app, as users still can't create Space on the web version. Besides this, Twitter is also testing another new function for the Spaces. It will allow the hosts to see how many people joined the live broadcast and how many people replayed the recording.

Have you used Spaces before? Leave a comment to let us know your experience, and stay tuned to TechNave.com for more tech reports.