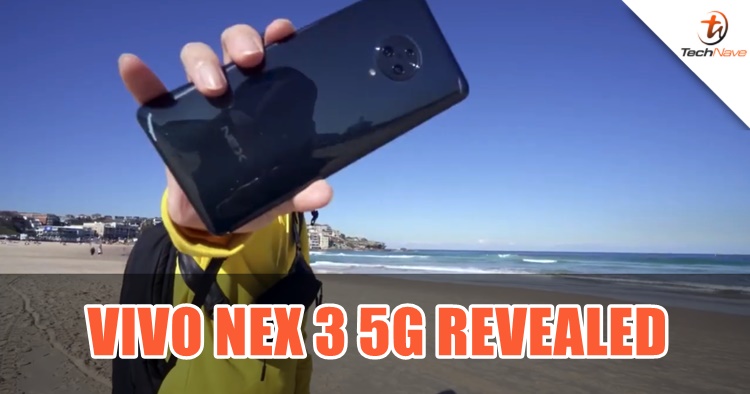 As Vivo continues to hype up the Vivo NEX 3 5G smartphone, someone managed to upload a teaser video showing us the device in full flesh, as well as new tech specs and features from other sources. Let's take a look at how the NEX 3 5G matches the previous rumours.

Just as the previous design sketch suggests, the NEX 3 5G does indeed feature a Waterfall display as well as confirming the pop-up front camera. Although it was only for a second, the pop-up front camera is wider than its predecessor and it could mean that Vivo has integrated two cameras or either that, the other camera is just a depth sensor. Meanwhile, the triple rear camera will be a circular design with the LED flash below it. A rather wide pop-up front camera

In terms of tech specs, one of the new information was that instead of having a 44W fast charging technology, the NEX 3 5G will use a 120W SuperFlash Charge for the 6400mAh battery. Back then in the MWC Shanghai 2019, Vivo demonstrated that the technology can fully charge a 4000mAh battery within 13 minutes. So imagine the speed on this one!

Other confirmed specs include a Snapdragon 855+ chipset, a 64MP main sensor on the triple rear camera and the display has a ridiculous 99.6% screen-to-body ratio. In addition, it seems that Vivo is still keeping the 3.5mm headphone jack around and combining with the HiFi audio system, fans will be happy about it.

The Vivo NEX 3 5G is set to launch in September but the exact date is still unknown. Nonetheless, we will be keeping an eye on this one so stay tuned for the official news only at TechNave.com.