These days when you say “metal”, you would expect something that is both refined, and elegant to the touch. You would also expect the pricing to be at the higher end of the scale, as people normally put the lower price brackets with plastic builds that is nasty and cheap. Not the Vivo V3. This is one of the few full-metal body smartphones out there that is elegant to the touch, nice to look at, and nicer to your wallet.

There are catches, but not as many as you would think. Better yet, Vivo has managed to pair the phone with some impressive specs without breaking the bank. How does this all stack up? Let’s find out shall we? 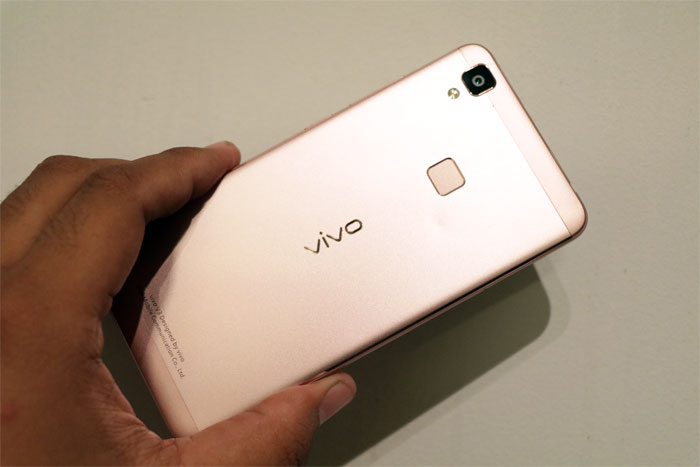 The Vivo V3 is a 5-inch smartphone with a HD screen (720 x 1280 pixel) resolution that gives it a nice form factor when it is held in the hands. On the front, it has an almost Apple-like look when seen from afar. Once you hold it in your hand however you can’t mistake it for anything but an Android phone. The three soft buttons sit just below the screen, with the selfie 8-megapixel camera at the top of the phone. 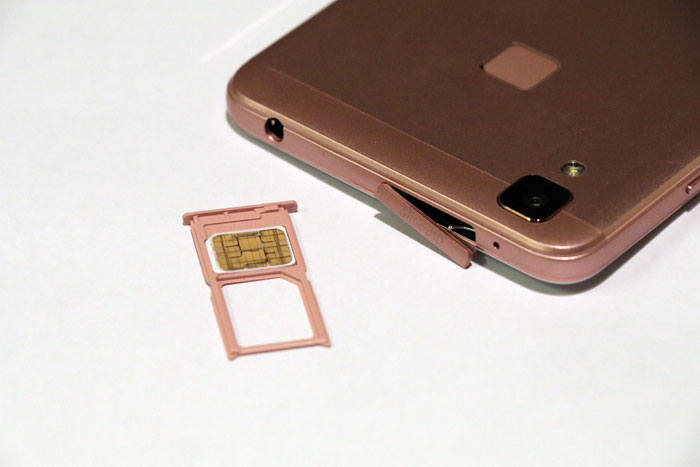 On the top of the phone, you can see the door to the microSD slot, as well as the 3.5mm audio headphone jack, while at the bottom is where the microUSB port sits, as well as the surprisingly loud speaker behind a three-hole grille. The right side of the phone is where you find the power and volume control, while on the left you can find the SIM card tray, which can be accessed with a pin. A note of caution – the SIM tray is made out of plastic, so it can be flimsy to handle. One of the SIM slots is for the NanoSIM form factor, while the other is a MicroSIM. 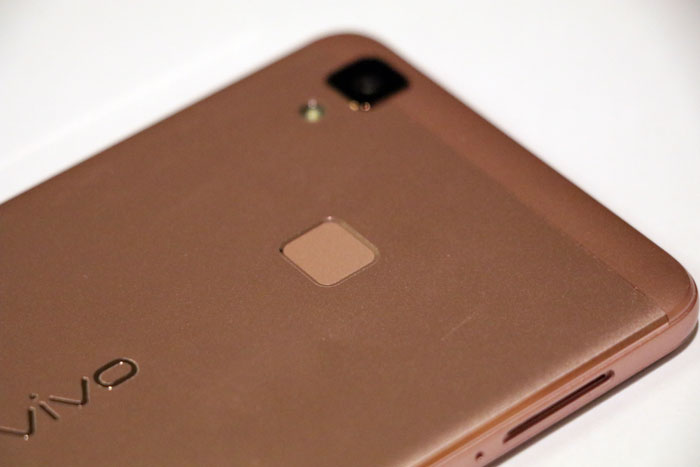 At the back, you can find the 13-megapixel camera, LED flash and the fingerprint scanner.

It is thin – only 7.5mm, but the design makes it comfortable to hold in the hands. The smaller screen is also a boon as it does not feel too big in the hands, and the metallic body is great in giving it a robust feel. We have to caution though – the body shell can get dinged easily so be careful on how you handle the phone or get a protective case for it as soon as possible.

Tech Specs and Features - A mix of midrange and more

As a recap, the specs of the Vivo V3 is as follows: 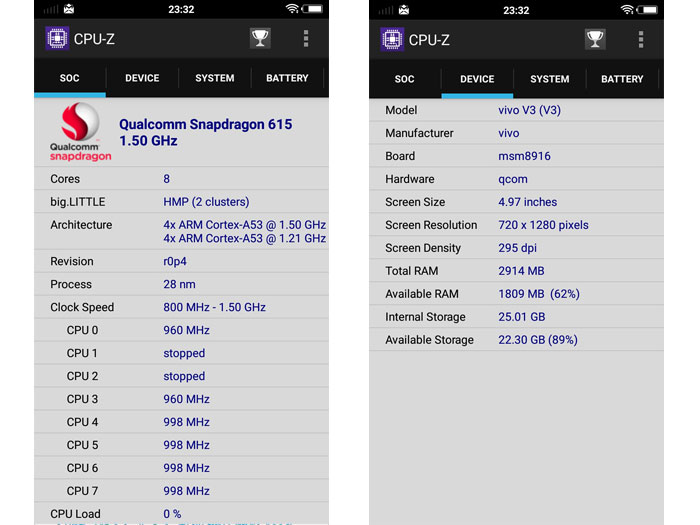 The fingerprint scanner on the Vivo V3 is as fast, if not faster than anything else in the market. You get all the gestures and functions you expect from it, and it accepts five fingerprint to unlock the phone.

The Snapdragon 616 may not be a screamer in performance, but it is more than adequate in running your apps daily. The 3GB of RAM certainly helps in this respect. You will definitely thank the large RAM as you go through your apps and games throughout the day. 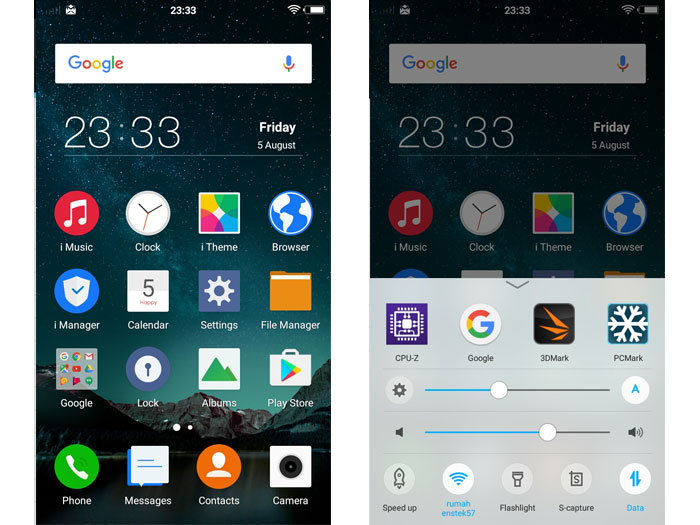 Performance - a mid-ranger through and through

The usual collection of tests that we run for the phones that comes through our labs reveals that the Vivo V3 is a good phone – no surprise on that front. It scored 40219 points in AnTuTu – a bit lower than expected but with the included processor it is par for the course. It did ok for 3D Gaming too, with 9125 points in 3DMark’s ice Storm Unlimited test. Asphalt 8 runs like a charm, so your selection of 3D games will definitely run without any hitch on the Vivo V3, while the Epic Citadel test sees it run the benchmark with an average of 59.9fps – so gaming is a go with this phone. 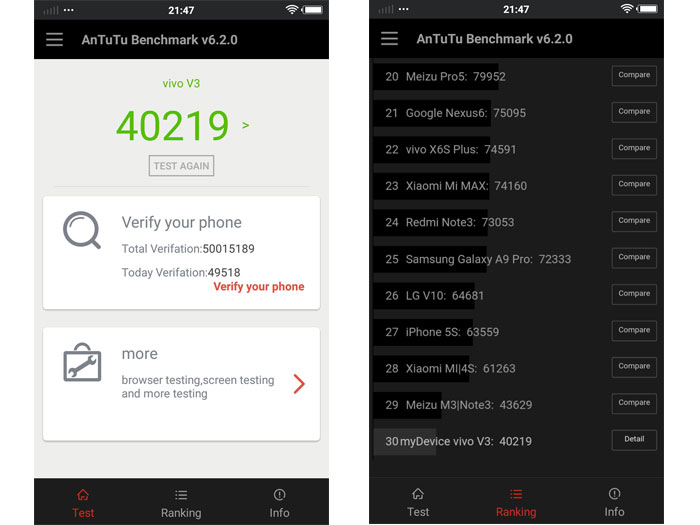 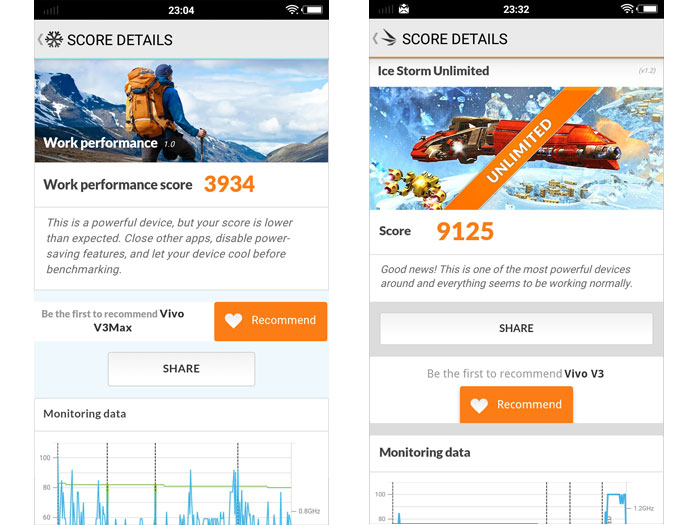 Not bad performance across the board 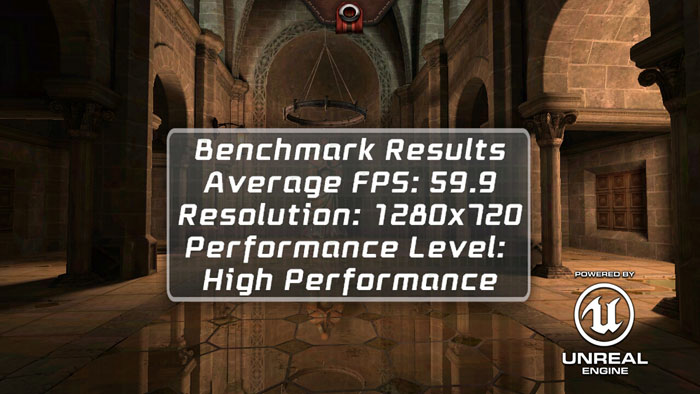 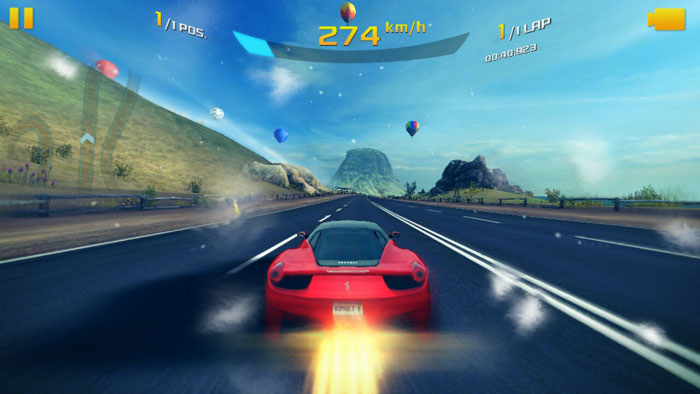 Asphalt 8 runs nicely on this phone

The battery on the Vivo V3 is one of its weak points – the 2550 mAh battery is just enough for a full working day standby, but if you are planning to do anything more than that – we suggest you to bring a battery pack along as normal social media and internet browsing will sap the battery faster – and the tiny battery (for today’s standard) does not help in this regard.

At the rear sits a 13-megapixel camera that Vivo said comes with Phase Detect Auto Focus (PDAF) technology – which is the same tech that is seen in DSLRs. In reality, the PDAF helps maybe a bit – It does focuses faster in the camera mode, but overall it is just slightly above average in performance. The images taken with the camera is nice, but even at base ISO, the colours seem to be a bit blotchy in patches in the photo. 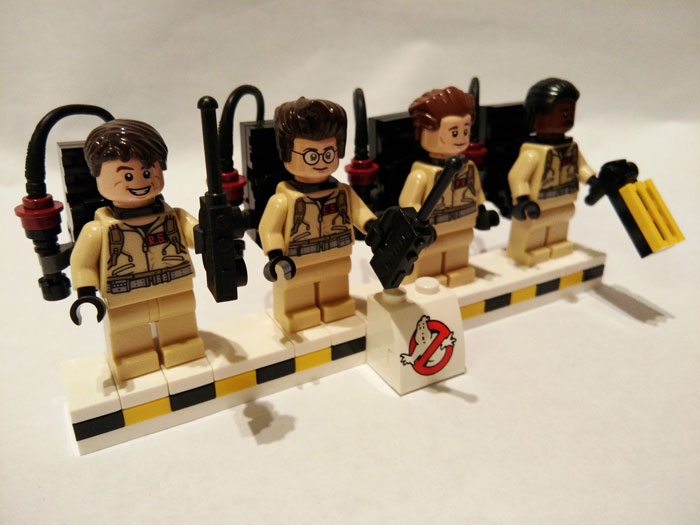 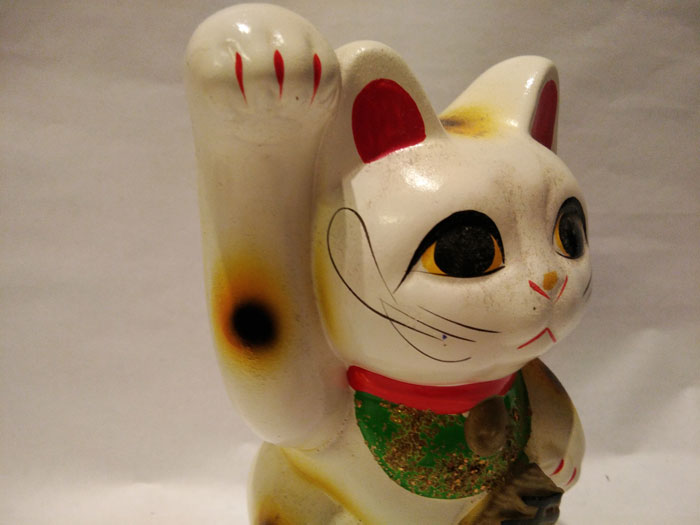 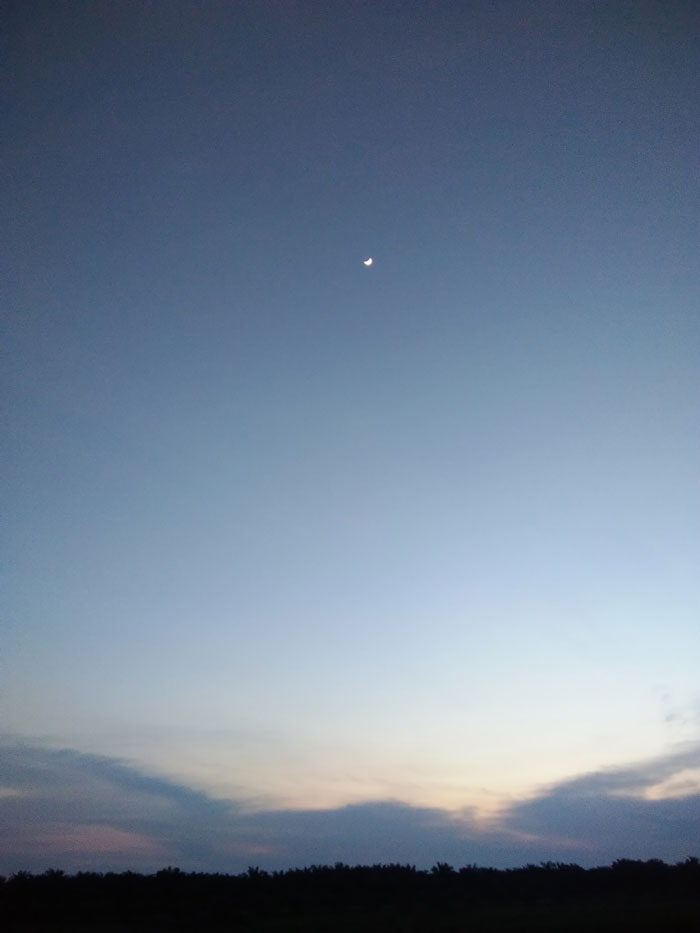 One of the strong points of the Vivo V3 is audio. Thanks to the built-in AK4375 Hi-Fi audio DAC, this is the phone that we can recommend to audiophiles to purchase. Just plug in your headphone, and calibrate it with the included tuning app. The phone can playback both hi-res audio and lossless file – and we did hear a difference in playback quality when compared to other smartphones out there. 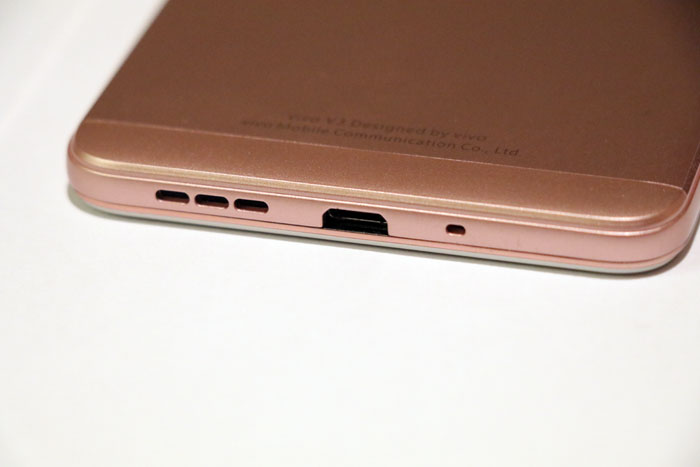 The speaker on the phone is quite loud as well. You can hear a great tonal quality that is lacking in phones in the same price band, and even at high volumes the sound does not break up. 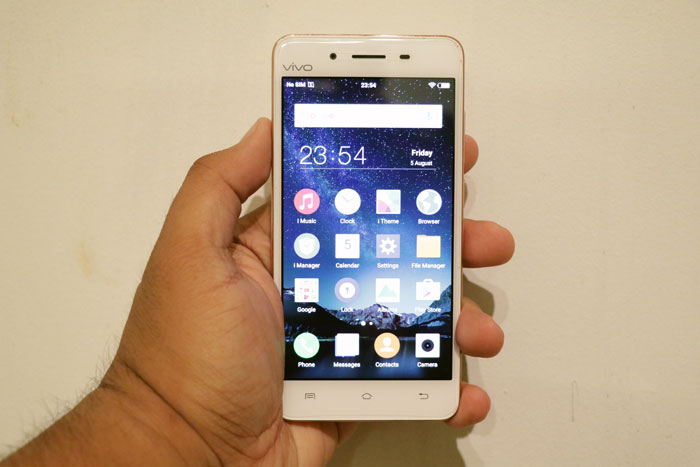 While the battery lets it down, the Vivo V3 has other redeeming qualities that makes it a good buy for anyone who wants a metallic phone with a respectable feature list. It is also a good option for audiophiles thanks to the good DAC that is installed in the phone itself. At RM 1099, it is a great value for what it delivers in the box. At the same price band, you can opt for the Samsung Galaxy J7 2016, but you will lose the fingerprint scanner in the process as well as a smaller RAM size. The Huawei P9 Lite is also a good contender, but the larger screen may not suit your taste.