Vivo is one of the few smartphone makers that offer higher resolution sensor for the front camera compared to the rear. So there's no surprise that they're doing the same with their new Vivo V5 Plus. It is amongst the first phones to offer dual front cameras. Find out how it fares in our review below. The design looks similar to the Apple iPhone series particularly starting from the Apple iPhone 6s series. Other than the slightly bigger home button and the placement of the power and volume button, the phone looks identical to an iPhone. It looks just like an iPhone with a different branding Tech-Specs and Features - Snapdragon is Awesome

Here are the Vivo V5 Plus specifications:- 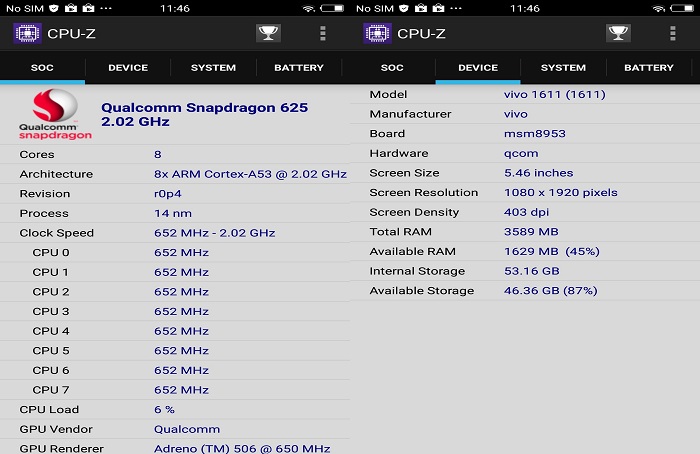 Vivo has finally switched up to Qualcomm from Mediatek. The Vivo V5 Plus includes a Qualcomm Snapdragon 625 SoC, 4GB of RAM, and 64GB of storage, which is a good combination. However, when it comes to the features, there isn't much else that we could see. It has similar app icon designs as the iOS user interface from an iPhone. 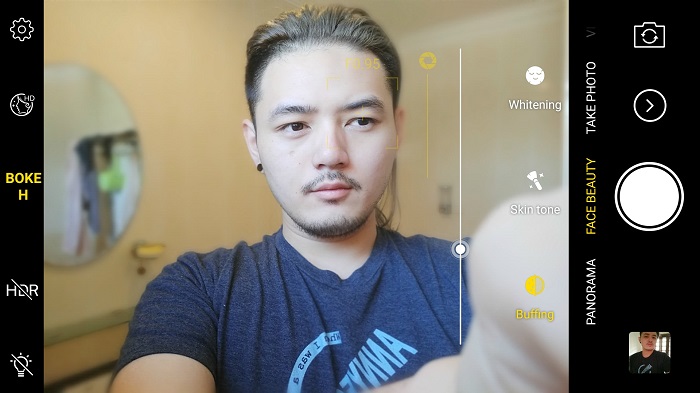 Camera Interface with Bokeh Mode On

In terms of camera features, the front camera is the star of the show. The Vivo V5 Plus uses a 20-megapixel sensor with a f/2.0 aperture and an additional 8-megapixel sensor for depth. It creates a bokeh effect in the camera app by separating you from the background. The aperture is adjustable depending on how shallow you want the depth-of-field effect to be. It works just like the iPhone 7 Plus in Portrait Mode but you do get extra control over your aperture and post re-focusing point. The UI looks simple and very similar to an iPhone. It has all the basic settings and surprisingly it also features functions like taking photos with voice and palm. 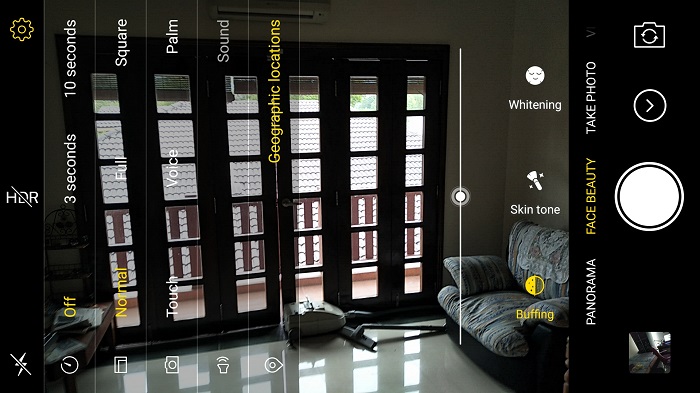 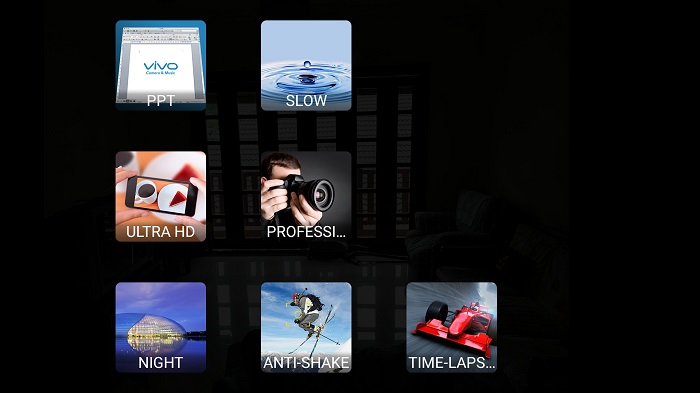 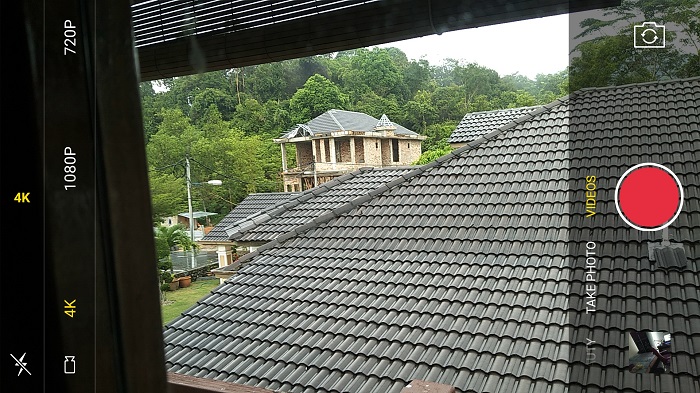 With a Snapdragon 625 powering the Vivo V5 Plus, the going is pretty smooth despite Vivo's heavy Android skin. Multitasking is handled well and we didn’t notice any major stuttering in animations. The fingerprint sensor is very quick at authentication and you can use it to lock apps in addition to just unlocking the phone. Playing a high graphic game like Asphalt 8: Airborne does feel smooth but the loading time may take a while. Other benchmarks like AnTuTu and Epic Citadel are above average scores place it a bit higher than most midrange devices. 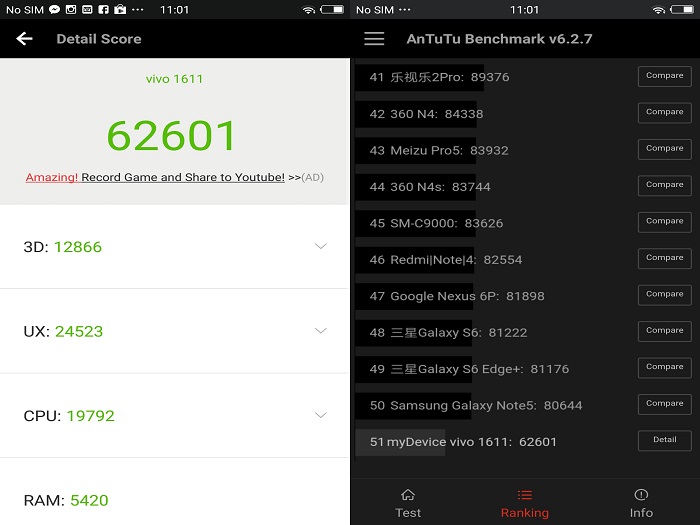 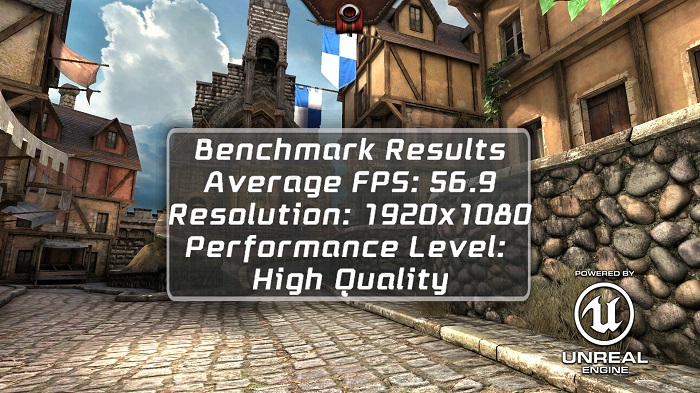 The phone does get warm after playing games for more than 10 mins. Its temperature level doesn't feel irritating but the heat generates more at the top part of the phone. The 5.5 Inch Full HD display handles movies well but the colour isn't as vibrant as the display like Super AMOLED. Audio quality is pretty weak in terms of sound clarity. Treble level seems to be much higher than the bass level till a point it breaks easily at high volume. 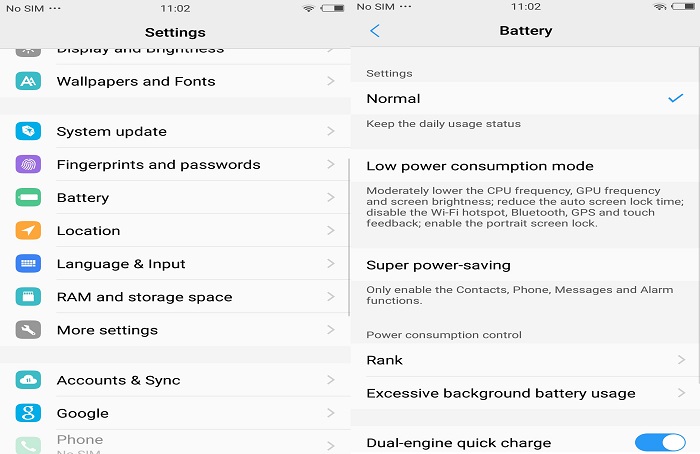 No battery chart can be found in Vivo V5 Plus

The Vivo V5 Plus has a non-removable 3055mAh battery which easily goes a full day on a single charge. Fast charging is supported in the form of Vivo's ‘Dual-Charging Engine’ technology, which features two microchips to handle higher current. Using this, we were able to achieve a 43 percent charge in about half an hour. 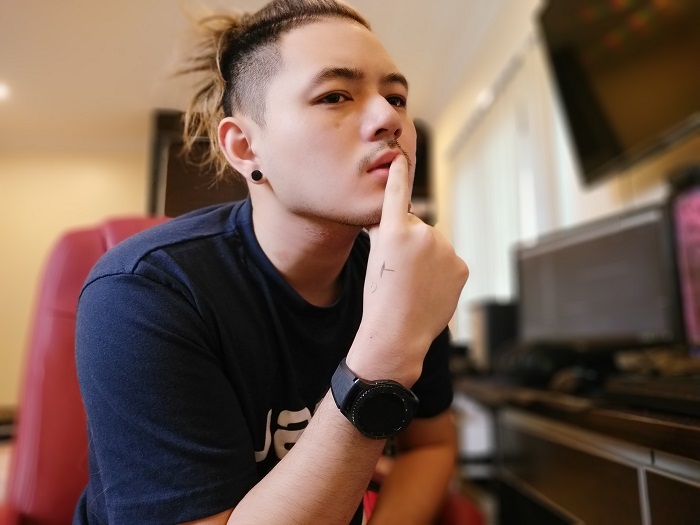 Indoor- Look at the bokeh

As for the camera performance, this phone focuses on the selfie camera rather than the rear camera. The image comes out sharp and has a warm skin tone when taking selfie with the 20MP Sony IMX376 sensor + 8MP dual camera. The Bokeh Mode definitely makes the subject pops out thanks to the shallow depth-of-field effects. This camera app is pretty versatile with the ability to re-adjust and re-focus in post when you shoot in Bokeh Mode. The Beauty Mode does work very well as it smoothes out your image without making it look fake. As for the rear camera, the 16MP isn't as good as the front. Clarity and sharpness aren't as good as the front due to the lower resolution. The lack of any kind of image stabilisation may be its weak point so the image gets blurred easily. Autofocus on both front and rear are quick but isn't as snappy, it takes around 1 second for it to focus. 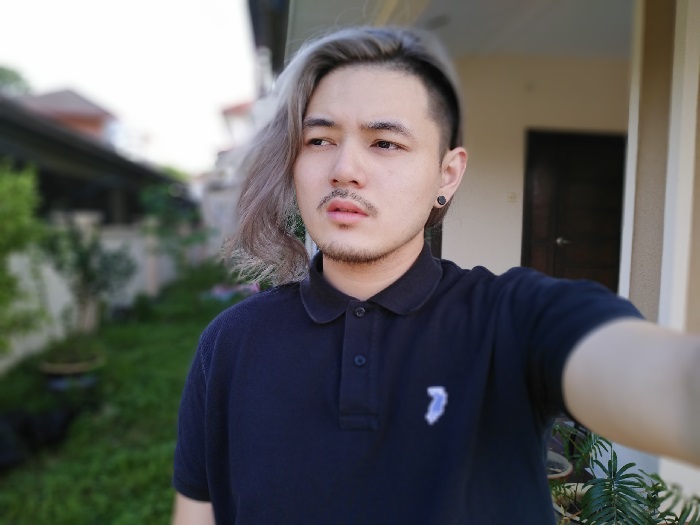 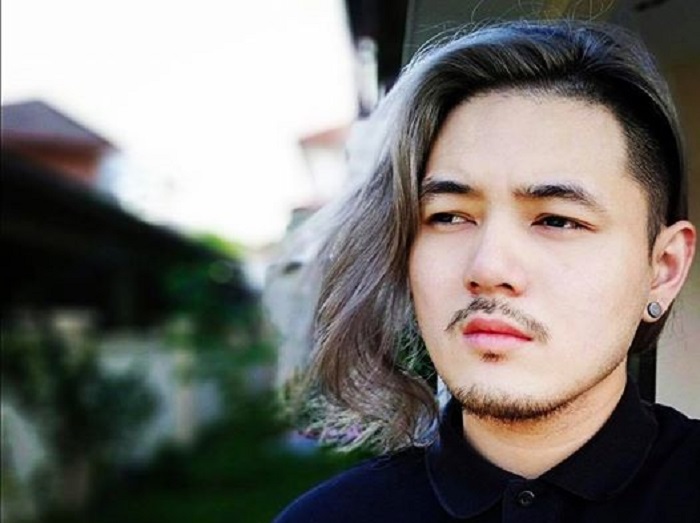 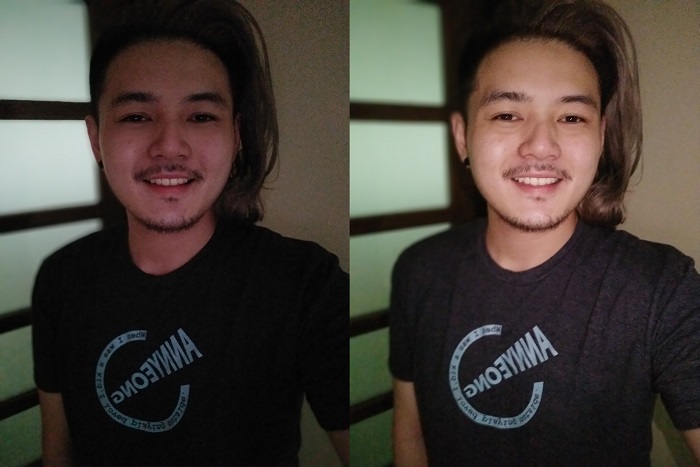 Lowlight - With and without filling light 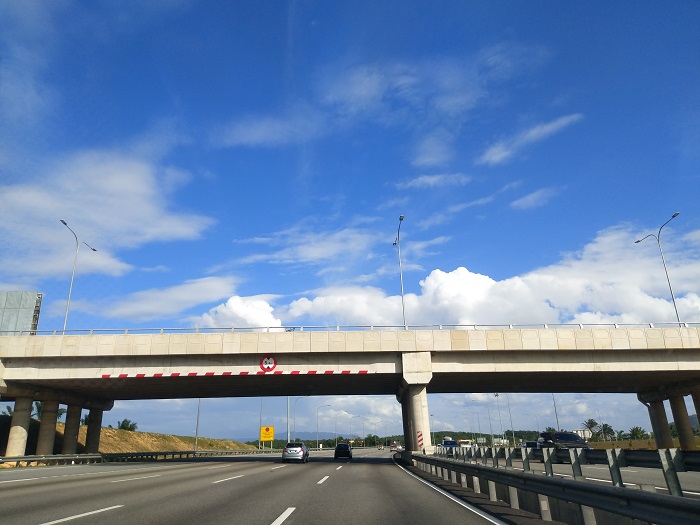 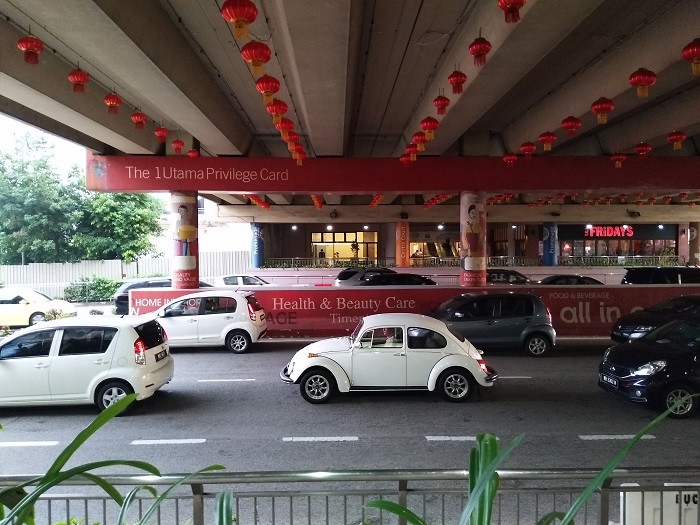 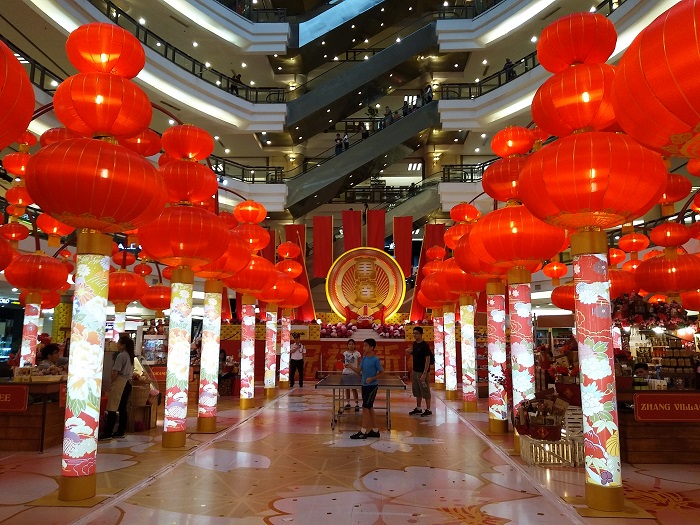 The Vivo V5 Plus comes with a price tag at RM1799 in Malaysia. It may be somewhat more expensive than their previous smartphone, but the performance is better with a Snapdragon 625 processor. The selfie camera is simply unbeatable for now on the market. We have yet to see any smartphone front facing camera that could achieve this level of quality. However, in contrast, the rear camera isn't nearly as good as the front camera, so if you really take a lot of selfies, this is the only smartphone you need for now. Performance is pretty up to standard for the price, so for casual mobile gamers it surely won't be disappointing.

For those who are looking for a more complete photography focused cameraphone you should probably pick up the ASUS ZenFone 3 or Honor 8 but closest competition in this price range would be the 4 GB RAM OPPO R9S with similar design but different brand and also the IP68 water and dust resistant Samsung Galaxy A5 2017 or A7 2017.

So what do you think? Could the amazing selfies make you want to get this smartphone? Let us know in the comments below, thanks for reading and stay tuned for more reviews at TechNave.com.