Vivo has once again made another selfie targeted smartphone that offers a higher resolution sensor for the front camera compared to the rear with the Vivo V5S. Is it just a slightly upgraded version compared to its predecessor? How much more do you actually get from the "S" version? Find out in our review below. The design looks similar to its predecessor but the company have moved the antenna line to the edge to make it look more like an Apple iPhone. Other than the slightly bigger home button and the placement of the power and volume button, the phone looks identical to an iPhone. Here are the Vivo V5S specifications:- 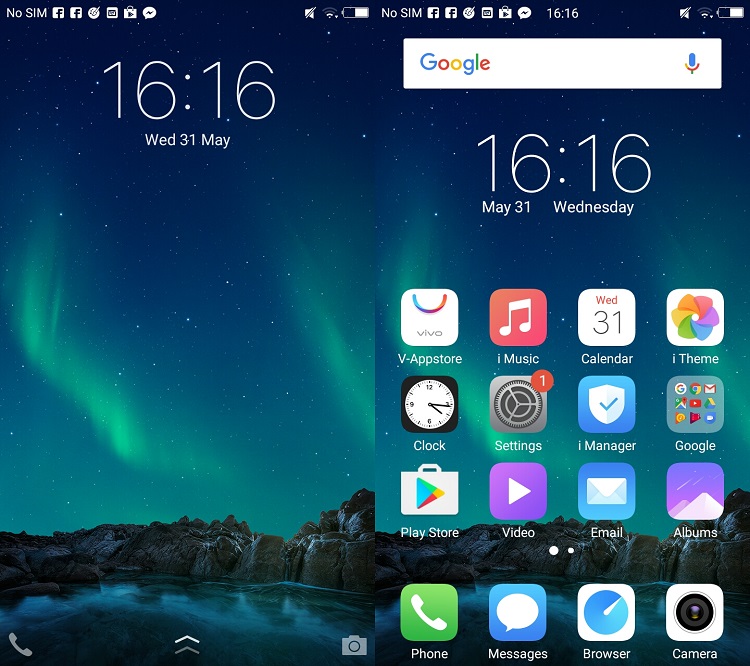 Vivo still uses the same MediaTek processor, so it's kind of a bummer to see that still. The Vivo V5S includes a MediaTek MT6750, 4GB of RAM, and 64GB of storage. Only the bigger capacity of internal storage has been upgraded at this point. The phone runs on Funtouch OS3.0 which is based on Android 6.0 Marshmallow, and we were quite disappointed that it didn't get Android 7.0 Nougat out of the box. 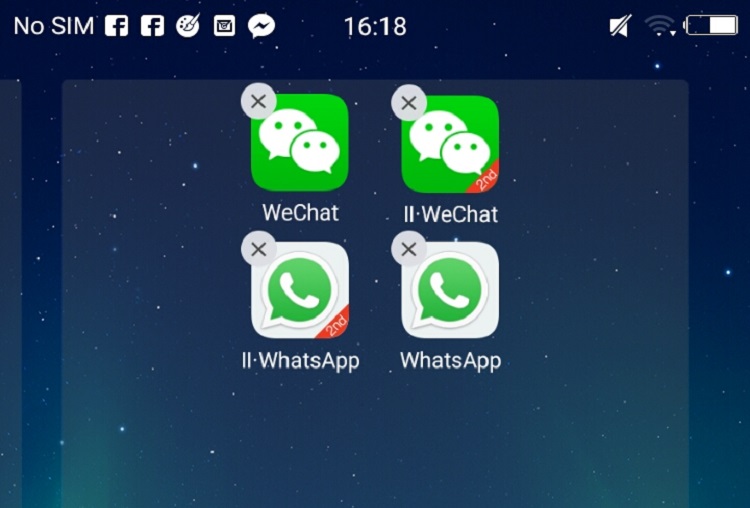 The UI looks similar to an iPhone, but there are some interesting features introduced by Vivo like the App Clone feature. It allows users to create a second instance of any app. Users can use the two apps to log into different accounts (so you can have double Facebook accounts at the same time, etc.). Vivo also integrated a split-screen multitasking feature called Smart Split 2.0. It lets you run two apps simultaneously. Some of the other software enhancements include Smart Click that turns on the flashlight or launches the camera by long pressing the volume buttons, Smart Motion that lets you activate a bunch of gestures to control various functions and One-handed Mode that shrinks the display to one corner of the screen. 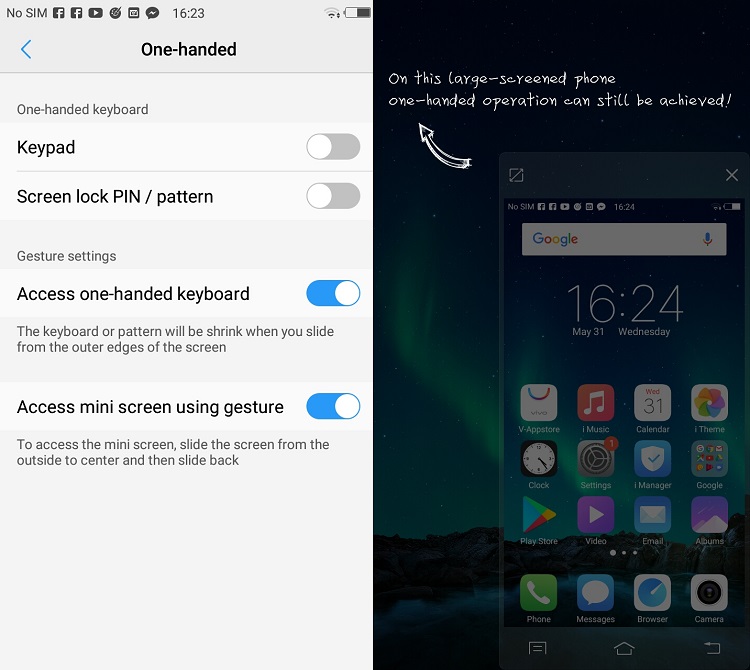 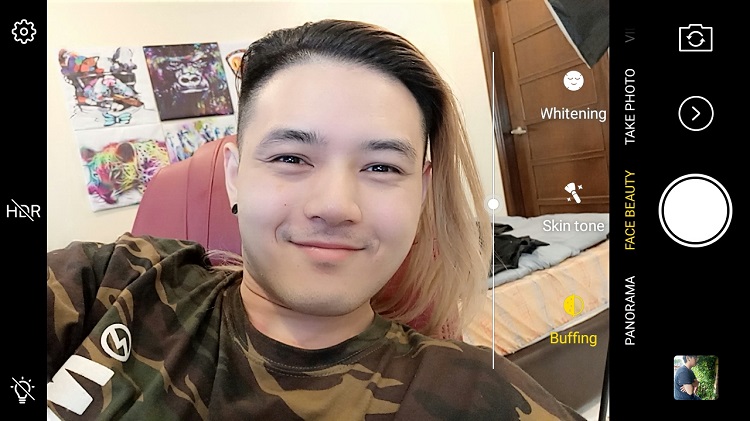 In terms of camera features, not much has changed. The Vivo V5S still uses a 20-megapixel sensor with a f/2.0 aperture on the front camera. The front camera also has a "Moonlight Glow" front flash. A 13-megapixel rear camera with PDAF (Phase Detection Autofocus) is on the back. It has all the basic settings and it also features functions like taking photos with voice and palm. 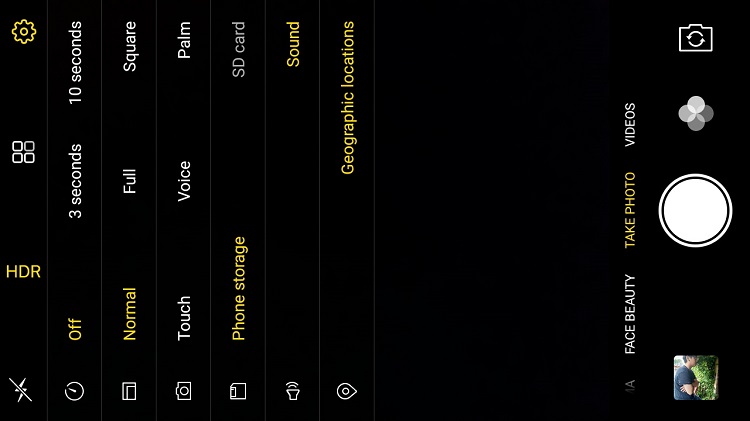 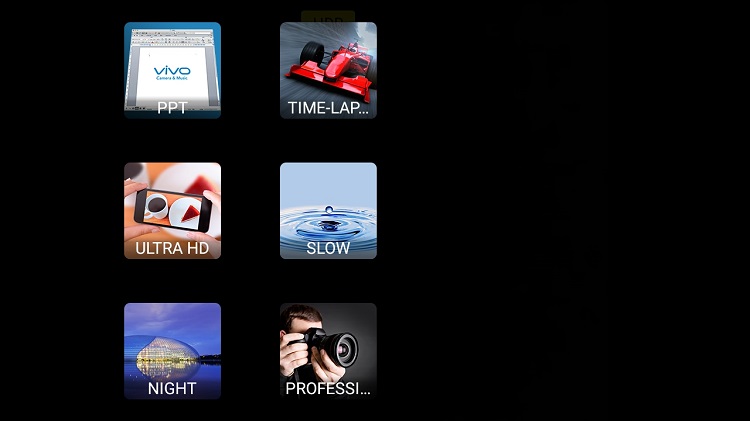 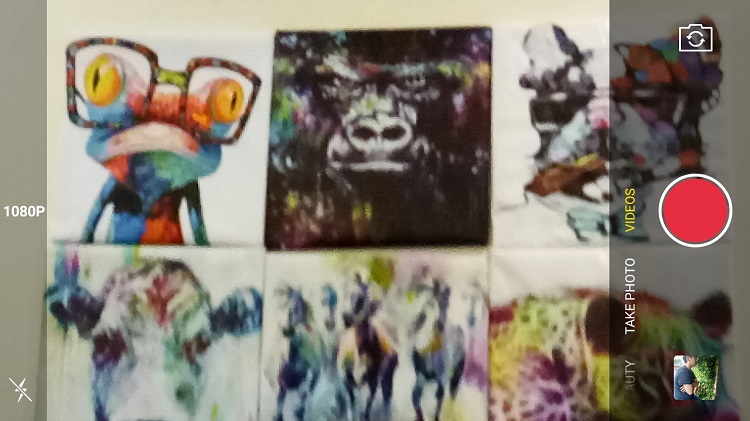 1080p Video Recording is available on both cameras 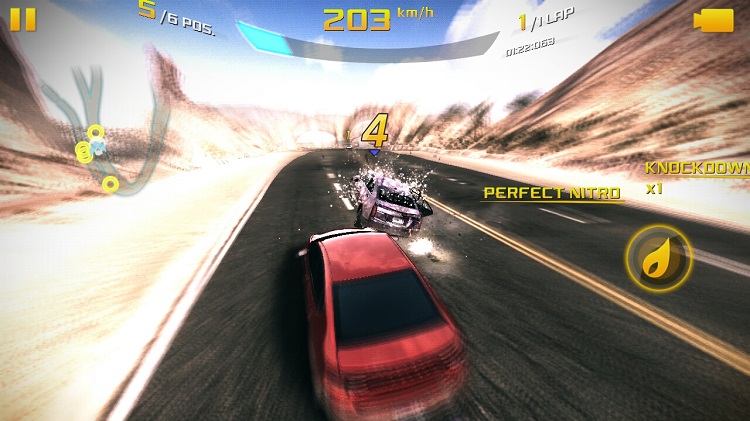 With a MediaTek MT6750 powering the Vivo V5S, it still manages to do a decent job when it comes to general operations like multitasking or running apps smoothly. The fingerprint sensor is very quick at authentication and you can use it to lock apps in addition to just unlocking the phone. Playing a high graphic game like Asphalt 8: Airborne does feel smooth but the loading time may suffer a bit despite the 4GB of RAM. Other benchmarks like AnTuTu and Epic Citadel are pretty average scores as MediaTek isn't that great when it comes to benchmarking. 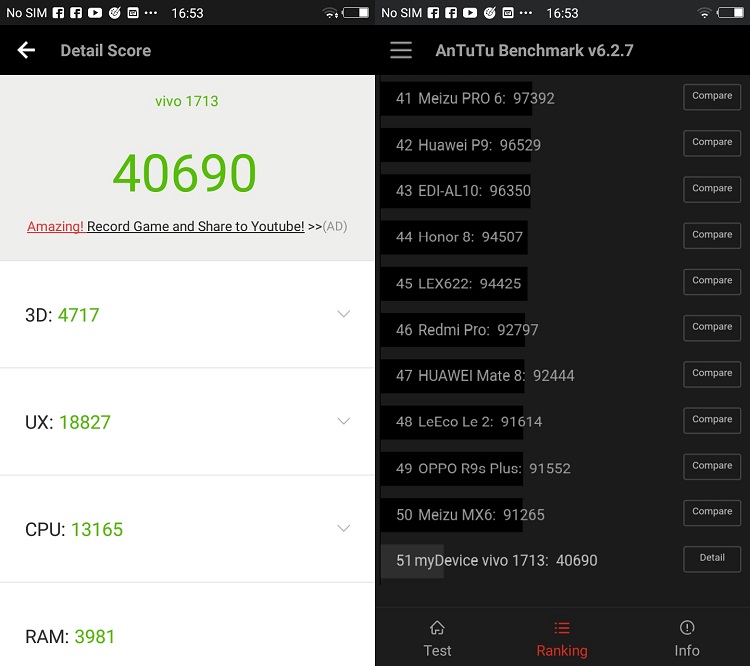 A rather lower entry-level to midrange AnTuTu Score 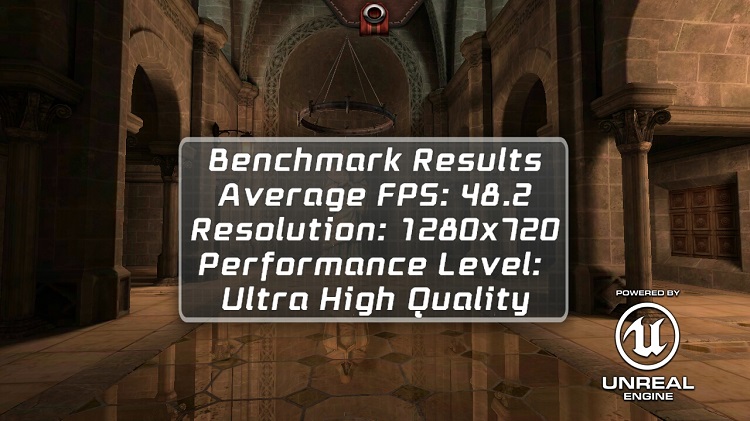 The phone handles heat pretty well. It remains at an acceptable temperature level even when playing games for more than 10 minutes. The 5.5 Inch HD display handles movies well although it's only 720p display. The sound quality from the speaker was impressive though. Unlike its predecessor, the treble and bass level are now more well balanced. 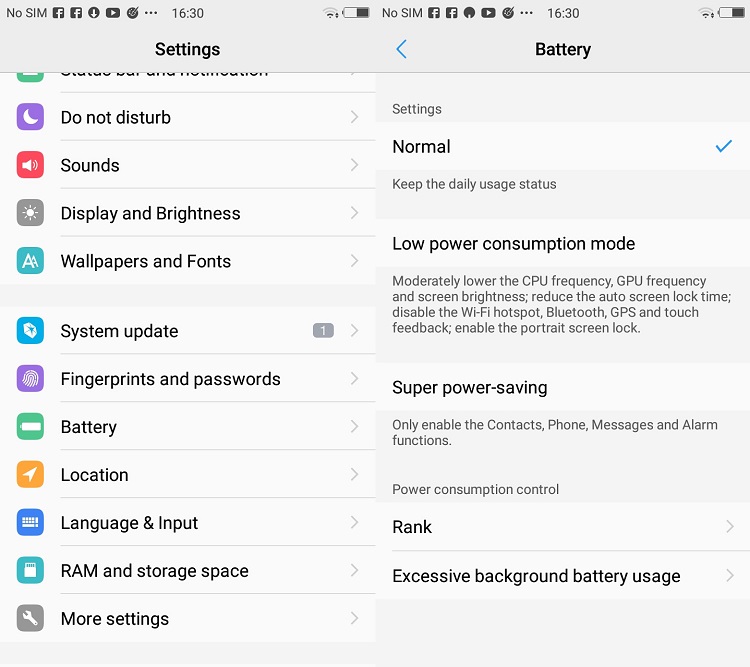 No battery chart can be found in Vivo V5S

The Vivo V5S packs a non-removable 3000mAh battery. In real-world usage, the phone managed to last over a day with heavy usage. The V5S took slightly less than 90 minutes to charge fully from zero. Charging speed all things considered is not bad even though it doesn't support fast charging. 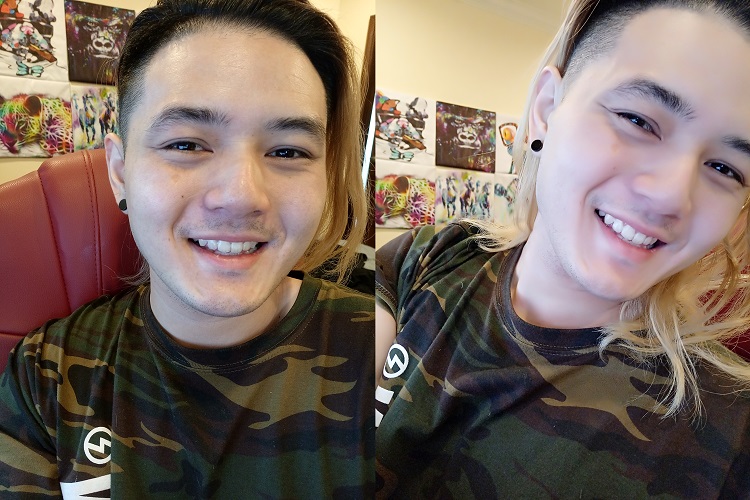 Front Camera, before and after Face Beauty Mode

As for the camera performance, this phone focuses on the selfie camera rather than the rear like most other Vivo smartphones. Selfies taken during the daytime shows a good amount of detail and proper colours. Lowlight shots may suffer a bit with noise but with the help of the moonlight glow feature, taking a selfie in lowlight isn't going to be an issue. The Face Beauty 6.0 does work very well as it smoothes out your image without making it look fake. Front Camera, Before and After HDR Mode 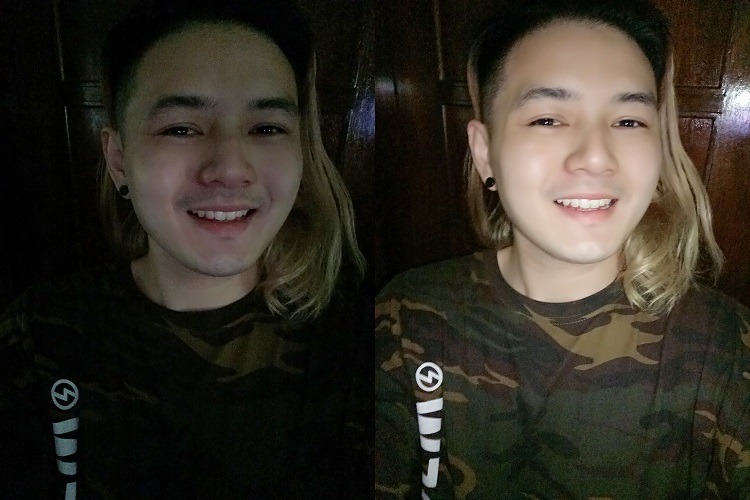 Front Camera, Lowlight without and with filling light

The 13-megapixel rear camera on the Vivo V5s is still impressive. It's quick with focusing and manages to capture some good detailed shots. There's a slight distortion at the edges though. 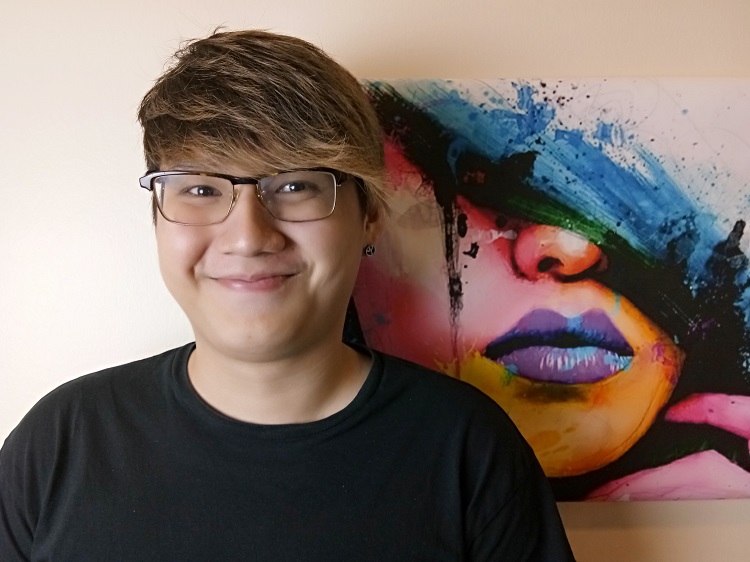 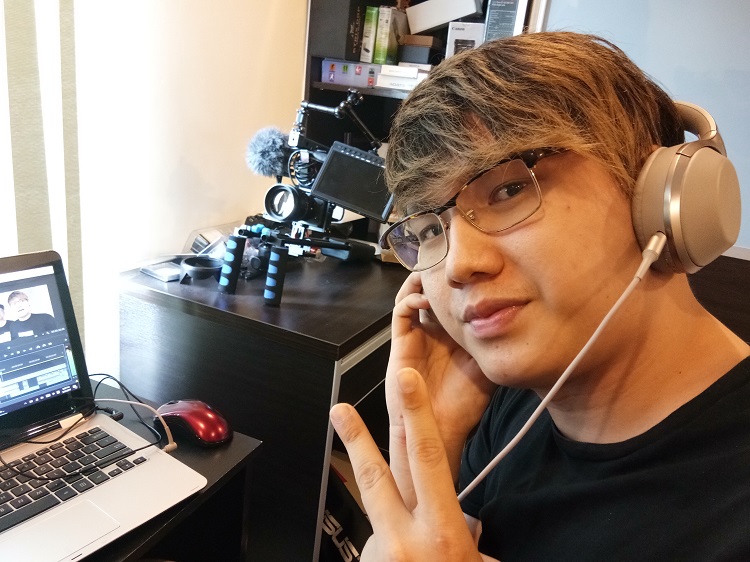 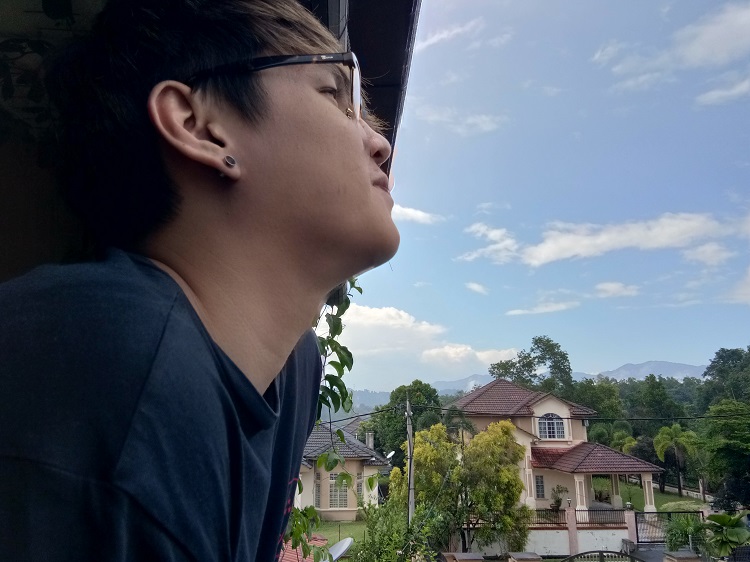 Taking photos in HDR mode can be hard as highlights are often overexposed. But once you do get the hang of it, the image can look vibrant and amazing. Portrait shots on the rear camera just don't look as great as the front camera though, as facial features seem to look less pleasing to the eyes. Autofocus on both front and rear are quick but aren't snappy, as it takes around 1 second for them to focus. The Vivo V5S comes with a price tag of RM1299 in Malaysia offering an improvement over the Vivo V5. The phone still performs well in terms of general usage, battery life, and camera quality. Taking great selfie can be easily done with the V5S but it definitely won't be as impressive as the more expensive Vivo V5 Plus. However, the rear camera isn't nearly as good as the front camera compared the Vivo V5 Plus. So if you just want an affordable smartphone to take great selfies with ease, this one would be perfect for you.

Performance is pretty much up to standards for the price, so casual mobile gamers won't be disappointed but if you already have the Vivo V5, we don't see much reason to upgrade. You can find the Vivo V5s at online sellers like DirectD and SatuGadgetDotCom or other authorized resellers with some offering freebies or even installment plans.

For those who are looking for better processor performance with a better rear camera, you should consider picking up the Moto G5 Plus for the Snapdragon 625 processor and Android 7.0 Nougat experience as it comes with a 12MP Dual Pixel autofocus rear camera for around the same price. The Huawei P10 Lite could also be a great choice if you're looking for an affordable smartphone with a great camera as well.

So what do you think? Could this be your next selfie camera smartphone to get? Let us know in the comments below, thanks for reading and stay tuned for more reviews at TechNave.com.