f Which combination of Digi Fibre Broadband plan is right for me? | TechNave

Current Location: Home > Reviews > Which combination of Digi Fibre Broadband plan is right for me?

Which combination of Digi Fibre Broadband plan is right for me? 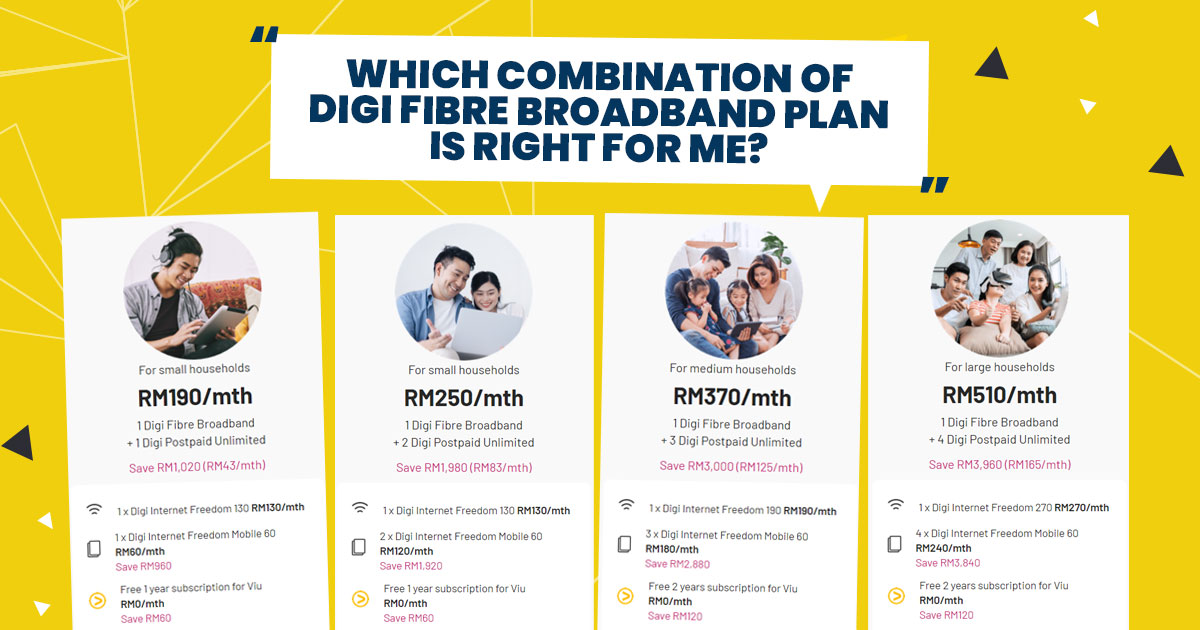 After years of saving, I finally have enough to move out of my parents' house and into a studio apartment I just bought. Not only will I be the man of the house, but I could go out or invite friends over without anyone nagging me.

That might sound nice and all, but it still doesn't change the fact that I'm responsible for paying my own utility bills such as water and electricity. Thankfully, Digi recently unveiled their brand new Digi Fibre Broadband which bundles together postpaid and Digi Fibre home plan into one simple package. (Yay! Fewer bills to pay!)

But that's not all, I heard that the package actually costs less than getting the plans individually, and they also come with free goodies such as up to 24 months of Viu membership when you sign up. Plans are priced as low as RM90 a month for Home Fibre and RM38 for the postpaid plan. But let's have a closer look at the Digi Fibre Broadband, shall we? 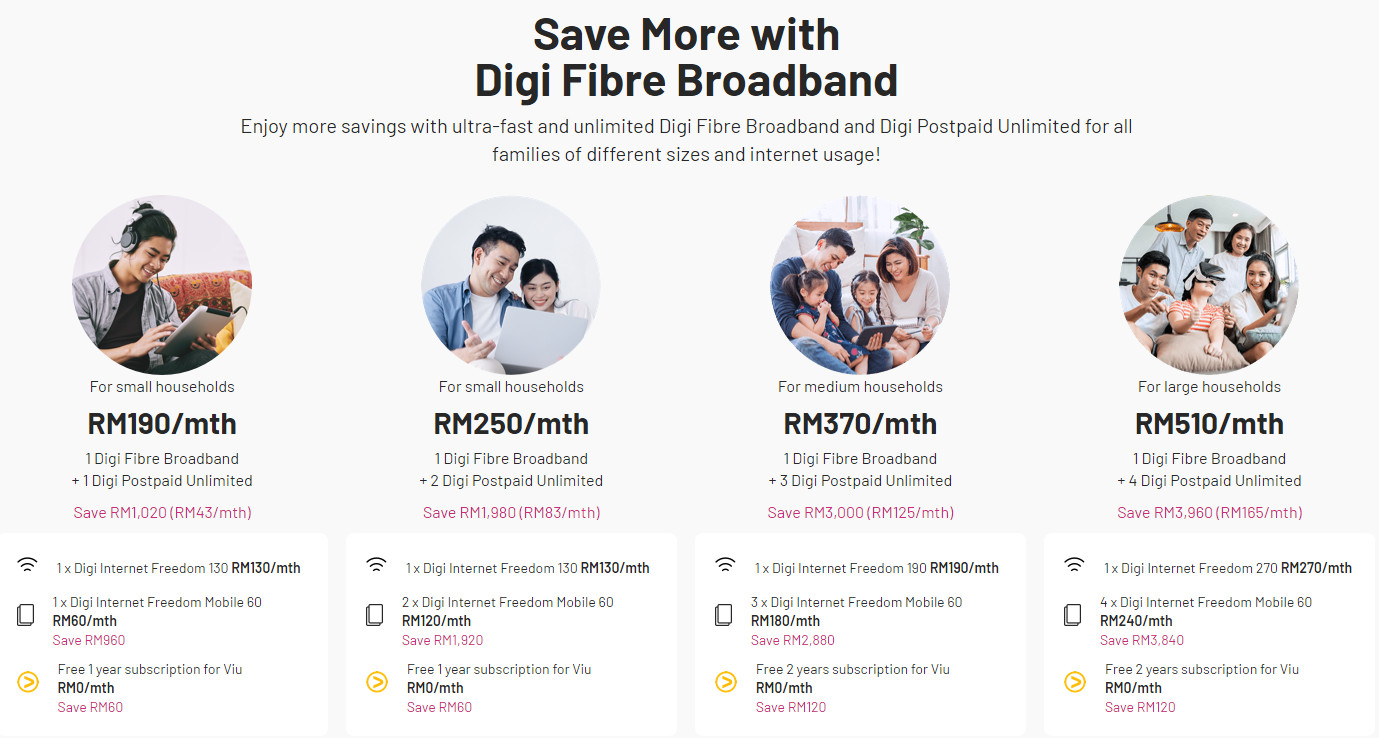 Combo plans start from as low as RM190 a month!

First and foremost, when choosing a plan, I need to determine how much bandwidth I need. Being an avid gamer, as well as someone who loves to watch Netflix before bed, it's safe to say that the Digi Internet Freedom 130 should be more than enough for one person since it comes with up to 100Mbps speed for RM130 a month.

However, I could imagine a family of four or more opting for the Digi Internet Freedom 190 or 290 a month because they offer much higher Internet bandwidth of 500Mbps and 1Gbps respectively. Having higher bandwidth will not only increase the download and upload speed but also allows multiple devices to connect and stream at the same time without lagging.

This is useful especially when you have that particular uncle who carries around two or even three mobile phones at once! But that's not all, by signing up for a more expensive Digi Internet Freedom plan, you'll be able to get up to 4 exclusive Digi Postpaid Unlimited lines for you and your family members.

If you're a light user and you're also constantly out and about, you might want to consider getting the Digi Internet Freedom 90 instead which provides up to 50Mbps speed for only RM90 a month. Be sure to evaluate your household's internet usage to see which Digi Fibre Broadband Plan is right for you.

Which Digi Postpaid plan should I pair it with? 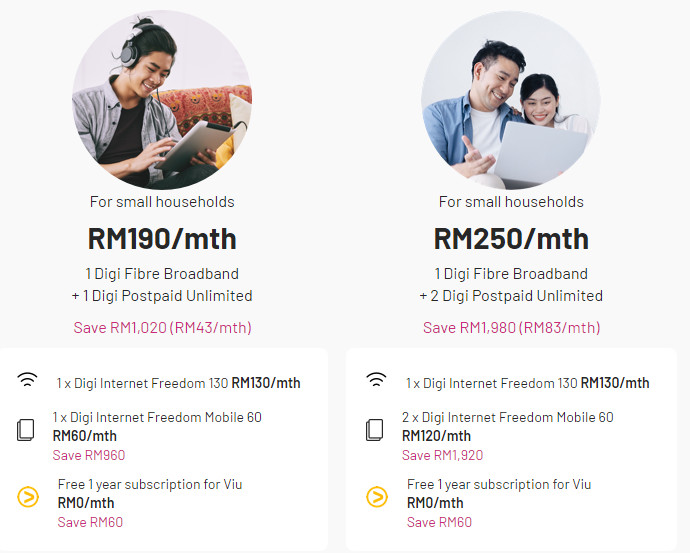 After picking a fibre plan, now I have to pick a postpaid plan to pair it with. As an active and outgoing person who is constantly out and about, the RM190 Digi Fibre Broadband package with the exclusive Digi Postpaid Unlimited for RM60 a month (originally RM100 a month) is sufficient for my needs. It comes with unlimited Internet data for my mobile phone, as well as 100Mbps fibre speeds at home.

When you sign up for the Exclusive Digi Postpaid Unlimited, you'll be eligible for unlimited internet quota, unlimited speeds (depending on coverage) and unlimited calls. In addition to that, you'll also get 20GB tethering, as well as 300 free SMS per month. But let's face it, who sends SMSes nowadays? 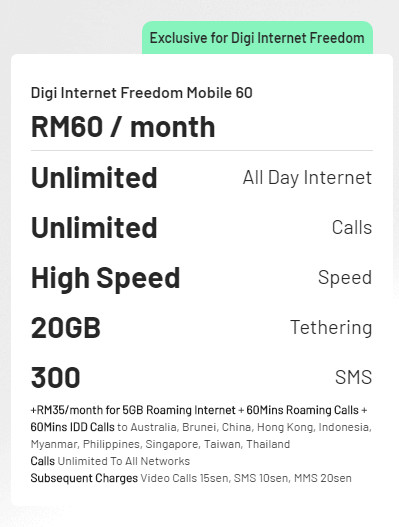 However, if you picked the Digi Internet Freedom 90 plan, you're only limited to the Digi Postpaid 38, which provides up to 28.5GB of internet data at the price of only RM38 a month. With both the fibre and postpaid plan combined, the total is RM128 per month, which is quite affordable by today's standards.

For families that are at home most of the time, they can even fully take advantage of up to 24 months of VIU where they can watch hundreds or even thousands of shows for free! Who doesn't like free memberships? Which combination is right for you?

I'm pretty sure you're wondering which combination of the Digi Fibre broadband plan is right for you. To sum it all up, if you're living all by yourself then the RM190 package is more than enough to cater to most of your needs. However, if you're a married couple with no children (for now), you might want to consider getting the RM250 package as it comes with 2 Digi Postpaid Unlimited, more than enough for you and your partner.

If your family consists of 3 or more members including yourself, then you could opt for the RM370 or RM510 plans, which not only provide you with more Digi Postpaid Unlimited lines but also the potential for larger savings. To go into more detail, by signing up for the Digi Fibre Broadband plan that's priced at RM510, you'll get up to 4 Digi Internet freedom Mobile 60 lines. That gives you savings of up to RM160 a month, as well as a free VIU membership worth RM5 per month. In other words, you could potentially save up to RM165 a month and a total of RM3960 after 24 months.

With all that said, which Digi Internet Freedom plan is the right fit for you? Head over to Digi's official website, if you are keen on finding out more information, and stay tuned to TechNave.com for more updates like this.