Besides the standard Xiaomi 12 and the Xiaomi 12 Ultra, the upcoming flagship series has another model that we can look forward to, and it's the Xiaomi 12 Lite. According to the latest leak, the device might feature a flagship-level camera setup, but sadly, it will be limited to its home country.

The Xiaomi 12 Lite got spotted in the MIUI firmware with two codenames, ZIJIN and TAOYAO. It's said that ZIJIN will be the codename for the Chinese variant of the upcoming device, with TAOYAO being the global version. It also shows that both versions are arriving with a 120Hz refresh rate and has a resolution of 2400×1080 pixels. They could pack the recently launched Qualcomm Snapdragon 778G Plus SoC as well for the performance. 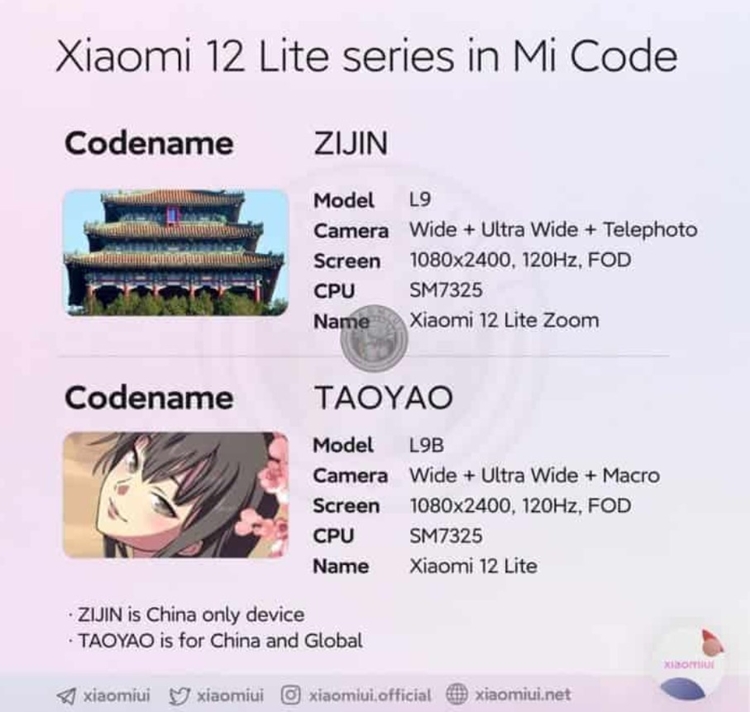 The difference between these two versions will be the camera department. For the global version, there will be a primary camera along with wide-angle and macro sensors. However, the Chinese version will have a telephoto sensor instead of a macro, which makes it more attractive by having a flagship camera tech spec.

According to the custom, Xiaomi would launch the vanilla variant of a new flagship series before getting into the others. Therefore, we might have to wait until next year for this one. Leave a comment to let us know how excited you are about the Xiaomi 12 series! Stay tuned to TechNave.com for more smartphone reports.