Current Location: Home > News > You can play over 100 games on the Xbox PC Game Pass at just RM5 for 3 months At the end of March, Microsoft released a PC Game Pass trial for the Southeast Asia region. We weren't sure how long would the trial lasts but looks like we got our answer as the PC Game Pass by Xbox is now officially launched in Malaysia.

During the trial period, Malaysian PC gamers could try it out for just RM1 but with the official launch, new subscribers can now join the platform for just RM5 during the first three months. After that period, the subscription fee will become RM15 per month which is super affordable and a sweet deal. 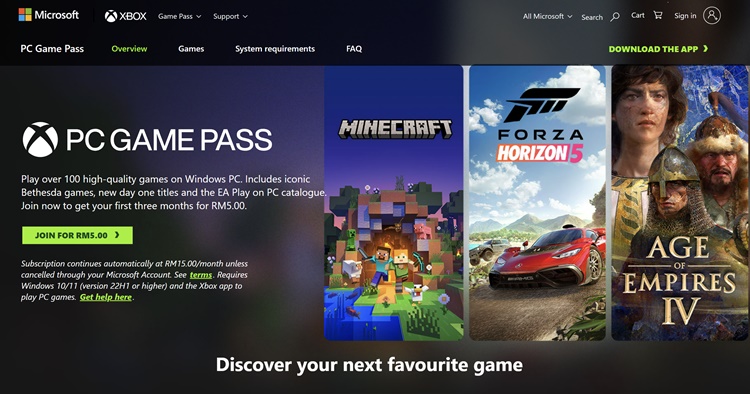 Just for your reference, a new triple-A title game can easily cost between RM200-RM300. If you were to play Halo Infinite (campaign), it's currently RM199 on Steam and it actually cost cheaper to play on the PC Game Pass because you would only need to pay RM180 per year (RM15 x 12 months). Furthermore, you get to play other popular games like Forza Horizon 5, the Halo series as well as other numerous titles under Bethesda and EA.

The Xbox PC Game Pass is now available to download at the Microsoft Store on your PC and it required Windows 10 or 11 to function. If you want to learn more, you can visit the official page right here. Happy gaming and stay tuned for more trending tech news at TechNave.com.