Current Location: Home > News > ZTE announced that they will be the first to reveal the world's first under-screen camera phone 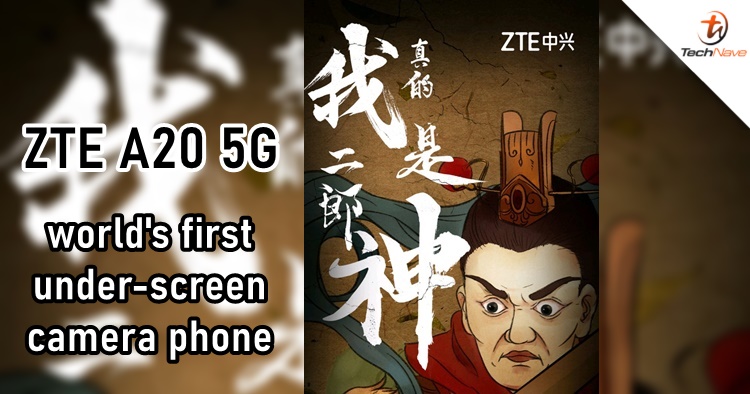 An under-screen front camera concept has been in the works since last year by OPPO and a few brands such as Samsung, vivo, Xiaomi, and Visionox are reportedly working on it too. Despite that, ZTE just made a surprise announcement that they will be the world's first smartphone brand to release an actual under-screen camera phone soon.

On Weibo and Twitter post by @UniverseIce, the phone is called the ZTE A20 5G. The poster you see there is a reference to a Chinese God named "Erlang Shen" who has the third-eye on his forehead, which was a rather clever pun in Mandarin. This is also the first time we heard about the ZTE A20 5G phone, so we decided to do some digging on the tech specs but unfortunately, there isn't much information online.

ZTE announced that it will release the world's first under-screen camera smartphone ZTE A20 5G pic.twitter.com/J42fxw6tUr

That said, there are some reports about the display being provided by Visionox so the phone will be mass-produced. It is said that the screen panel has "no bangs and no digging holes", and there's no need to lifting the structure as well. The ZTE A20 5G is reported to be released at the end of August or early September.

There's still some time to go until the release and we are certainly looking forward to the ZTE A20 5G. Until then, stay tuned for more trending tech news at TechNave.com.