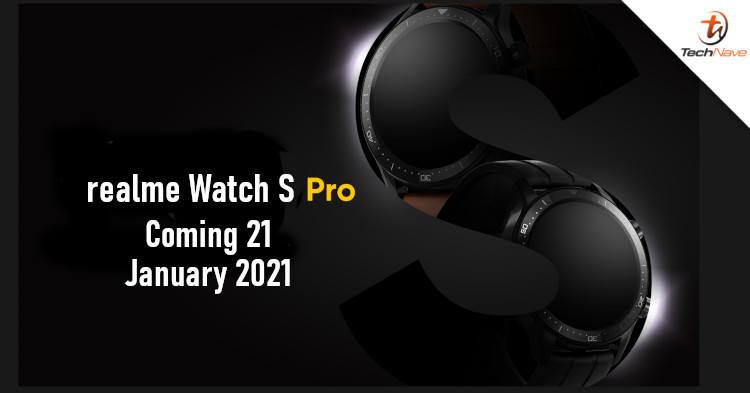 Smartwatches used to be rather expensive, but prices tend to go down as the years go. Last year, the realme Watch S Pro that launched in India only costs INR 9999 (~RM552). That's quite affordable for a smartwatch with a heart-rate sensor. Now, realme Malaysia plans to bring it here.

realme announced that it will be launching the realme Watch S Pro in Malaysia on 21 January 2021. The smartwatch's design and specs aren't a mystery by now though, as it was first leaked on the US FCC in September 2020 before launching in India. Its rounded metallic frame and black straps give it a rather sporty look, which should appeal to many. There's also a small dock for users to charge the wearable. The realme Watch S Pro comes with a sizable 1.39-inch AMOLED touchscreen, which has a max brightness of 450 so you can see it clearly even under sunlight. It also has an estimated 420mAh battery that can last for up to 14 days. In terms of features, the smartwatch has embedded sensors to scan your heart-rate and bloody oxygen levels. It also has stats tracking for 15 sports modes, over 100 watch faces to choose from, and 5ATM water resistance.

Another thing to note is that realme might launch the Buds Air Pro on that day too, so that's another thing to look forward to. But having said that, what are your thoughts on Watch S Pro? Are budget smartwatches like these good enough for you? Let us know in the comments and stay tuned to TechNave for more news like this.